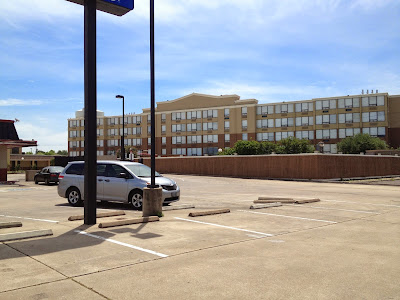 This paint job was never used for an operational hotel.
Opening in summer 1974 as the Aggieland Inn (named after a long-defunct hotel on campus, which had long been functionally replaced by the MSC and gone for many years), this hotel was initially successful with its restaurant ("Whistle Stop") but in the mid-1980s renamed to Aggieland Hotel. After (or around the time) Ramada pulled its name from a bankrupt hotel down the road, the it was renamed Ramada Aggieland Hotel, then Ramada Inn (which it was for years), then simply "Ramada" (due to rebranding). In 2010, the owners of the Ramada name, Wyndham Worldwide, built a new Ramada near the corner of University Drive East and Earl Rudder Freeway, and the name of this hotel changed to Aggieland Inn. 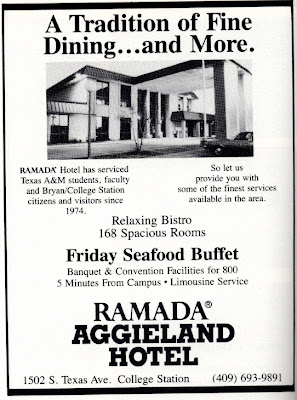 Even before losing the name, the Ramada had been going on a downhill trend for years, there's a story about how the restaurant (by this time, having long dropped the Whistle Stop name and advertising outside of hotel guests) accidentally(?) gave food poisoning to the Longhorn football team circa '99, and other minor stories of what happened there. Moving the Ramada to the highway was surely planned a few years before, and in late 2007, an ambitious plan was announced to turn the Ramada into upscale student housing. The late AbouTown Press covered this in December 2007, which you can see the scans of below (click for higher resolution).

As Aggieland Inn, as it was in the 1970s and 1980s, the hotel got miserable reviews. The hotel shut down in September 2011 (KBTX's link was down, this was before I learned to archive links) just prior to football season. In 2013, it got a repaint and was rumored to reopen for the fall, but it never did. Here's a Google Maps 45° view of the hotel before the repaint. 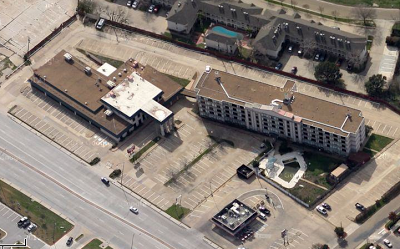 The restaurant/lobby/banquet hall building is about the size of the hotel itself.
In addition to the new photo at the top of the page, in April 2015, I made a visit to snap some more pictures. However, there were lots of No Trespassing signs in the area, and I wasn't going to get arrested for some semi-defunct blog I was just updating, so here's one more shot of the hotel (I didn't get too close to the lobby part, unfortunately). 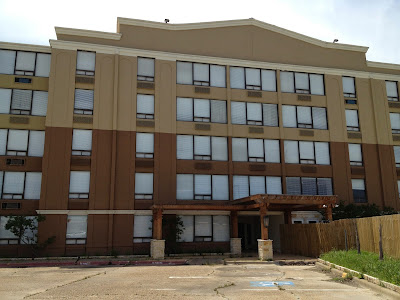 The redevelopment around 2015-2016 essentially split the property into two parts. The hotel itself got a big renovation inside and out, with the pool out front demolished for a new lobby, and the peaked roof removed for a new hotel, TRYP by Wyndham. The hotel (with a new address of 1508 Texas Avenue S.) eventually opened in November 2017.

The lobby and restaurant space of the old Aggieland Inn was gutted and became a strip mall. 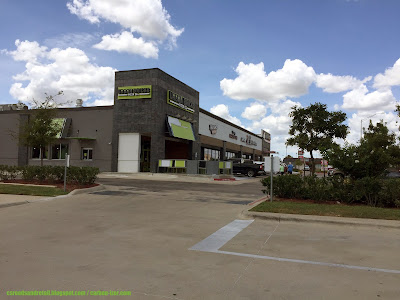