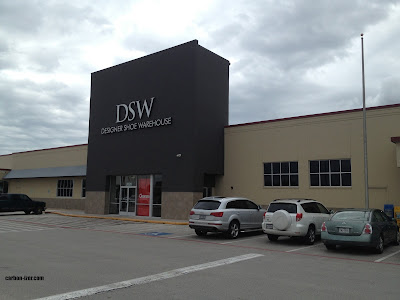 The store today (picture mine). The facade just keeps getting bigger and bigger...

H-E-B built its first store in College Station in 1991 (according to InSite Magazine) at 2026 Texas Avenue South, a time when they were expanding like wildfire across East Texas and Houston area with "H-E-B Pantry Foods". Unlike the full line H-E-B stores, the Pantry stores were small even by early 1990s standards (averaging 20k to 30k square feet) and lacked departments that other stores had, only with a meat counter, produce, and a very small collection (maybe one aisle) of non-food items like HBA (health & beauty aids) and pet items. At the same time, two more stores were built in Bryan, one near the intersection of Twin Boulevard and South Texas Avenue, and one near the intersection of Old Hearne Road and North Texas Avenue.

I can't find the facade of what this Pantry foods looked like, but it looked a lot like what was seen at Houston Historic Retail's page, which lists all of the Pantry Foods locations, and I helped. (I should also note I used to have the list as part of the store directory that the Pantry Foods had, two actually, but they've been lost for years).

Instead of parking spaces in front of it like the other stores in the center, it had a large ramp in front of it for shoppers. Inside, it had mid-rising drop ceilings with a few random "Texas" graphics, such as a picture of a bunch of haybales scattered through a field. The produce was in the right side, there were ten check-out stands (with one being an express lane, 10 items or less), a photo developing kiosk, a "bakery" that didn't seem to make anything that fresh (fare was mostly limited to some tasteless bagels, the stuff that would be sold in the bread aisle today).

In 2002, this store closed and was replaced with the massive and modern store across Holleman. That wasn't the end for the space, though in summer 2003, Gattiland closed its Bryan location and moved into the old Pantry Foods store within the month. Although I was getting too old to be part of the Gattitown demographic by the time it opened, I visited anyway, because it was new, and it was to be the latest in the technology. Gattitown totally rebuilt the facade (the Texas part remained visible from the back, but unless you lived in one of the apartments behind the complex, you could not see it) and removed the ramp in the parking lot, making it smooth. You also had to enter through the sides.

“When we built [the Bryan location] it was the second GattiLand we built,” Moffett said. “This is the latest generation, and it’s going to be more comfortable and fun for every age. From here on out, they’re all going to be GattiTowns.”

This is the sixth restaurant to open under the GattiTown name and “eatertainment” theme, and each is decorated to reflect its community, Moffett said. At the College Station restaurant, an Aggieland Dining Room will be lined with reproductions of Benjamin Knox paintings. The drink station is positioned beneath a mock water tower, and other rooms include a city hall and a mock movie theater.

The game room will occupy the entire back section of the restaurant, but Moffett said adults can find quiet dining areas in a corner cafe and the Library, which will have high-speed Internet connections and five iMac computers for customer use.

Moffett said he plans to hire a full-time marketing employee to promote the restaurant’s meeting space, which is free to use once customers buy a meal. There also are two meeting rooms set apart from the customer traffic flow, and some of the dining rooms have sliding walls that can divide them into smaller spaces.


The "mock water tower" was modeled after by-then defunct old water tower at the corner of Park Place and Texas Avenue, and as for the "Library", I never did find (employees didn't seem to know where it was, a sign of bad things to come), but it apparently did exist and was soon converted into another theater room. The midway area wasn't all that better than Gattiland, if anything, it seemed smaller. There wasn't even room for a playground. The old style tokens that Gattiland used was replaced by a card system.

Well, initially Gattitown was a huge success and the parking lot stayed packed every Friday and Saturday night. But as the years wore on, Gattitown started to get competition in the form of Chuck E. Cheese which opened at Post Oak Mall in 2005, and at Grand Central Station, which happened soon after. Chuck E. Cheese did the most damage to Gattitown, with Gattitown's knockoff formula competing with the original, and just like that, Gattitown slid downhill just like its predecessor. It was pretty much exclusively for kids (no classic arcades, or even alcohol) for that matter, and even then stayed pretty empty except for the "Kids Eat Free" nights. In July 2012, Gattitown closed. The pizza was now abysmal (not even fully cooked) and Mr. Gatti's left the area for good after nearly 40 years of jumping around town.

It wasn't the end of the space, though: in fall of 2013, it reopened as DSW (Designer Shoe Warehouse). Despite the fact that the facade of the old Gattitown/Pantry was completely covered up, the design restored the appearance of a retail store, so if you go inside and close your eyes you can almost remember how the Pantry used to be laid out.

UPDATE 02-24-2022: Updated for Pita Pit's closure, adding the tuxedo store previously mentioned, did some rearranging to list Old Navy with the others (along with a fixed date), and updated an old sentence to account for Hastings' closure.
Posted by Pseudo3D at 8:16 AM