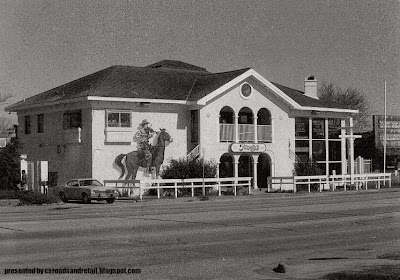 Courtesy of Project HOLD, a black and white photo. While not nearly as ancient as this suggests, it does represent a time gone by. 803 University.

For most of my life, 303 University Drive was a restaurant named Fitzwilly's, a two-story bar and restaurant with decent burgers and wings. It closed mid-way through my college career, and I was saddened by the loss, not only because it was on my regular rotation but because it had been such a staple on Northgate, in an era where a decade might as well be eternity.

Of course, the building predated Fitzwilly's for years, with the building being built in 1930, hosting apartments. Titled "The Varsity" (a TexAgs mentions it was the "Alamo Apartments", which may or may not be the case). From second-hand stories on TexAgs and comments here, the building was dilapidated (at least in the later years), the manager was the same woman for 44 years, and the building had no air conditioning or central heating. It's worth noting, though a lot of dorms on campus didn't have air conditioning either (Walton Hall didn't get air conditioning until the late 1990s, at least). It also didn't have a phone line, which led it to be excluded from phone books in the 1970s.

The historic date and land use is backed up by city documents.

While the directory I have seen below is from 1939 (and a bit difficult to use since nearly every road name has changed, but the addresses have been renumbered). 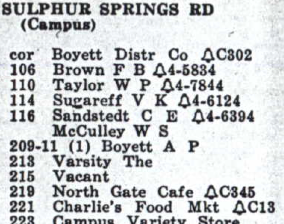 While I can't readily pull up an aerial from 1939 (they do exist, but not in a format I can readily use), the buildings on Northgate did retain the configuration until at least the early 1960s, and the buildings do align with the directory. In this picture, you can readily see where the Fitzwilly's building was. 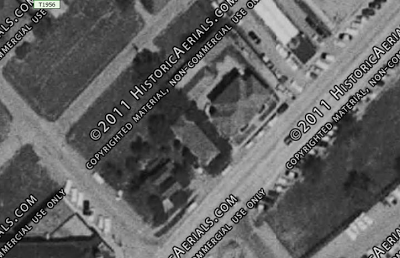 This picture was taken directly from the Northgate Chevron post

- The private residence to the southwest (where that Citgo station was) is the private residence listed (two addresses, possibly because of the two buildings).
- The Varsity is the no-telephone building where Fitzwilly's later was.
- The vacancy is where Dry Bean Saloon is now.
- The next building is where the former "Miranda's" portion of modern day Dixie Chicken is. The "main" building (originally Aggie Den) was built later, which created Bottlecap Alley——notice that in this era, "Bottlecap Alley" is enough to fit two rows of cars comfortably. Try fitting one car into Bottlecap Alley today. This is the original "North Gate Cafe" (there was a Northgate Café in modern-day ICON in the 1990s, but they are unrelated)
- and finally, the building to the northeast is the famous Old Army "Charlie's Grocery", which finally disappeared in the 1980s after sub-dividing part of their store out to Texas Aggie Bookstore, which remains today (though in the 1990s had to make that "AggieLand").

In 1979, the building finally was converted into a two-story bar but I've been unable to secure the names of said businesses very easily (a 1985 city directory even listed "Edward Jones", which is at 303 EAST University Drive). Luckily, capn-mac has his own chronology (I've also learned "Bogie's" was there as there as the last bar to inhabit the building before the "renovation" mentioned). From what I have, in 1980, it was Alamo Bar & Grill, which probably (compared to the building layout today) a dump and far more obvious about its former status as a run-down apartment building it was before. There was also "Sebastian's Tavern" as well around 1982-1983, but Bogie's was in the 1983 phone book but not the 1984 one. It's possible that the building sat vacant for a bit before being renovated again (which would make since). The link posted above also mentions said "renovation" to the building, which is probably what made the building it is today: a skylight was added at about this point, and probably the interior was rebuilt to restaurant code. It was in this phase from the late 1980s (1987, perhaps?) that it was the Flying Tomato Pizza (the city directory lists it as "Flying Tomato & Pizza-N-A-Pan"). By other independent sources, they had a hot air balloon that dropped Frisbees and other prizes. I don't know how I came across this, but it wasn't from this location, as by the time my family moved here, Flying Tomato was now Two Pesos. 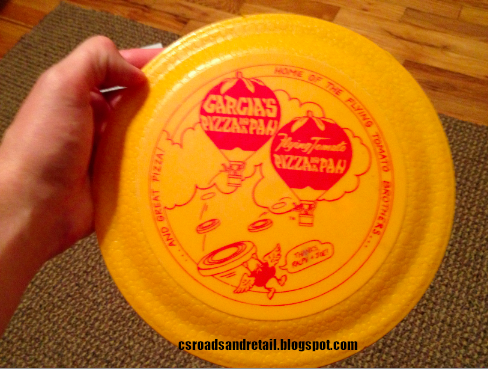 As for Flying Tomato, two comments I received (from "The Twice-Tasted Life" and James Durbin, respectively), mentioned a few things about it, namely the plants in the restaurant.

I remember the Flying Tomato very well. It was "Flying Tomato Pizza in a Pan" featuring square pizza slices in a variety of tasty flavors. I met my first wife there, and she was their "Flying Tomato" in parade marches of the day. They had a pool table or two upstairs and the mezzanine was lines with plants. The company started with a restaurant in Denton near the UNT campus. LOVE your blog, and I'd hate to see it go, but you gotta do what you gotta do.

The atmosphere was very nice when it was The Flying Tomato, with lots of plants, a fireplace if I am recalling correctly, and a big roomy space overall.

Flying Tomato closed in April 1991 and Two Pesos opened in its place in May. Two Pesos was basically a Taco Cabana knockoff (as briefly discussed here), which by all accounts was cheap and tasty. Unfortunately, Two Pesos had copied Taco Cabana a little too closely to the point that a case went all the way to the Supreme Court that affirmed that Two Pesos copied Taco Cabana's format too closely, and ultimately the restaurants ended up selling out to Taco Cabana, though there was already one there at the time, so it closed in 1993.

Two Pesos also had a turn at the building's facade: while we can't see what the building looked like in the days pre-Two Pesos, we do have this picture from a Northgate redevelopment plan... 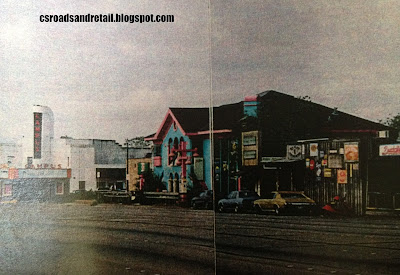 Not in the Northgate color palette.

In 1994, it became what it would be known as for nearly the next 19 years: Fitzwilly's. Unfortunately, Fitz's, despite having good, cheap food (wings and burgers) fell out of favor with the Northgate crowd. Even when it wasn't crowded, service was slow (and also, food portions shrunk in the last year). It was still liked by an older crowd, but that's not what the Northgate landlords wanted, so the lease wasn't renewed and it went to Eccell Group, which has all but exited the Northgate area these days (Daisy Duke's has been sold, Café Eccell has moved, and La Bodega has closed as well). 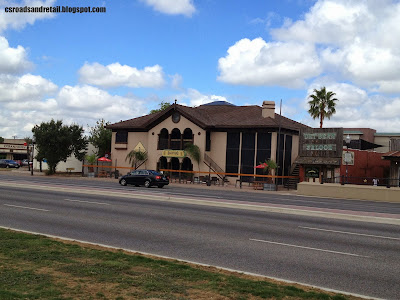 While not in the gaudy "cotton candy" colors of Two Pesos, The Backyard seems a bit boring.
The Backyard is the name of the replacement (opened August 2013, Fitzwilly's closed in May of that year), which has a far darker interior than Fitzwilly's, more expensive food, and other changes I didn't particularly like, and due to aforementioned color restrictions, the new owners just painted it the same dark beige tone we've seen everywhere else. I didn't take a picture of the back area of the restaurant--while Fitzwilly's had a few tables and some delightfully dated blinking incandescent lights, the newer facility's back area was significantly rebuilt. If you crave more Fitzwilly's pictures that are in color, you can visit the Yelp page. Since leaving college, I've heard The Backyard has revised its menu to add more sandwiches (the old menu was burgers and tacos).

In 2018, the Backyard, like Café Eccell opened a "co-branded" La Bodega outlet inside.

UPDATE 01-04-2021: Removed previous update notes and added the actual months/years when Fitzwilly's and The Backyard opened. Somehow it wasn't added before.
Posted by Pseudo3D at 1:49 PM 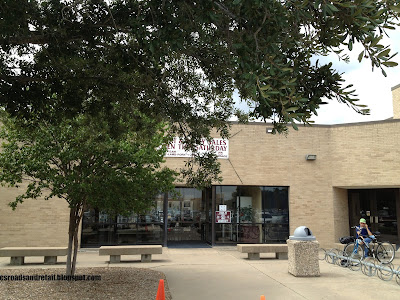 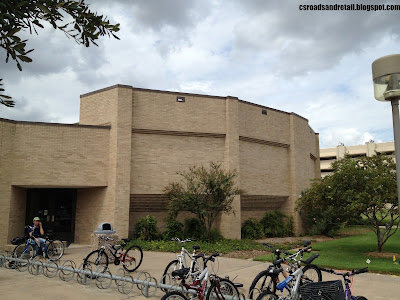 This building was erected in 1981 and opened to classes in January 1983. A unique feature of Texas A&M, the Rosenthal Meat Center is a full-service meat processing plant and learning facility, slaughtering (and offering for sale) lamb, beef, pork, and derived sausage products. Unfortunately, I don't have interior pictures, including where the sausage is made (literally).

UPDATE 10-26-13: The loading dock is seen in the final picture (taken after the previous ones) 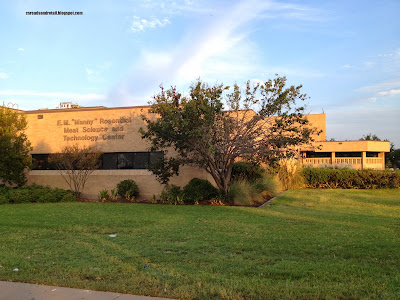