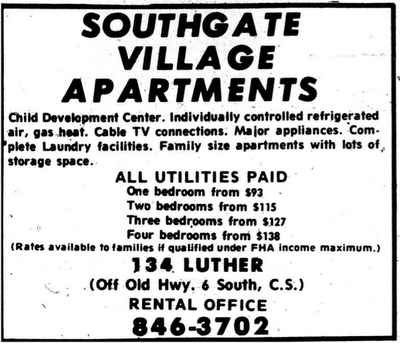 Here's an Eagle ad from December 1971, subsidized even back then.
Originally part of the Luther Street and Wellborn Road article to undergo major changes as of this writing (accounting for the huge new apartment building replacing the entire block), the Southgate Village Apartments were built in 1970 and is a HUD subsidized apartment (even going into foreclosure in early 2012). 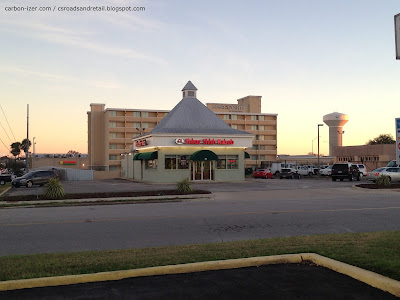 Picture taken January 2017, I had been holding onto this for over two years!

Unfortunately, I don't have my city phone books to back me up on this (so this may be updated a bit later this week) but Shiraz Shish Kabob (110 Dominik Drive) retains the architecture of a 1970s-era Kentucky Fried Chicken, which it originally was until moving to Park Place Plaza. In the late 1980s it was registered to "Fast Color Inc." and that was "Quick as a Flash", a portrait studio. My old notes say that Quick as a Flash was renamed to Ritz Portrait Studio before folding, and earlier versions of this website say that there was another restaurant called "The Filling Station" between Ritz and Shiraz that served a variety of fried foods (further research says it was just called "The Pump"). Both Brazos CAD and TexAgs confirm that the changeover to current ownership happened in 2008, when Shiraz opened, as well as confirming the name of the previous restaurant. The exterior of the restaurant was renovated during this phase, and during the renovation to Shiraz, a fountain was added in the main dining area for ambience (though it made the restaurant a bit humid). I'm guessing that when it became a portrait studio, connections required for food service were simply covered up rather than removed entirely. When I moved this from the page that is now the Blue Baker page, one of the comments was this: For a brief time after Quik as a Flash closed, that little building was a fast food place called, I think, The Filling Station. It specialized in fried everything. They were quite good if you could exist on fried everything. Chicken, chicken fried steak, fried livers and gizzards. They also baked beautifully decorated Christmas cookies. Interesting place.


On a more meta post level, I'm going to begin the process of properly integrating this website into Carbon-izer.com, as it already has a few features that were moved there (not to mention the City Directories, worth checking out). As part of this, comments will no longer be available, something I've thought about before as most of these posts never got the number of comments I expected, and the comments "to be moderated" usually are spam. Speaking of which, the posts that attract the spam comments are often made on deprecated posts that were removed, with a text explaining such. There are also other old, awful posts never removed either...until now.
Posted by Pseudo3D at 3:03 PM