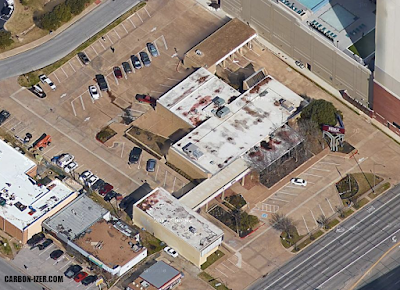 Since I didn't get a picture of the bank before it became a big hole in the ground, we'll have to do with this.

I love punny titles, and what better way to do that would be to mention the demolition of the old University Bank Building?

This was (going past tense here) a rather large and rather old bank that was a Citibank until very recently when it changed to BB&T. Before the page was removed, Brazos CAD says it was built in 1961 and from what I confirm that is absolutely true. Besides the many transactions at the bank itself, here are the major transactions in terms of name changes and all.

1962: College Station State Bank relocates to this building from a previous location.
1963: The name is changed to University National Bank.
1990: After a long run as University National Bank, it is acquired by Don Adam to become First American Bank (officially acquired that year)
2005: Citigroup acquires the bank chain, rebranded to Citibank
2014: BB&T purchases 41 Citibank branches including this one and rebrands them.
2016: BB&T relocates to The Rise at Northgate; building torn down, thus beginning and ending its life with relocation.

That being said, there are two more things I want to hit:

OFFICE SPACE!
The bank property also included an adjacent space, which was 707 University, BCAD link here which was a two-story office building with a small footprint. My records show this was used for non-bank space as early as 1974 (with the Provident Mutual Life Insurance Co.) and my 1989 phone book mentions "The Personal Computer Store" (with the ad mentioning it was "since 1984"). This became MicroAge by 1993, and starting in 1999 moved out to their current home (now known as Avinext) on East University Drive. I don't think anything has occupied the space since.

FOOD TRUCKS!
711 University was also where food trucks congregated (or near the now-defunct Notes-N-Quotes next door). Since I graduated a few years ago, I can't list all the more recent food trucks and trailers there, though here are a few I remember:

Wafology - Seen spring 2014, this was a waffle food truck which had chicken and waffles and a few others. The waffles weren't great, they were more of the standard "using pancake batter in a waffle iron" that I've seen everywhere except for home cooking. I think it returned for fall 2014. It is now known as MESS Waffles, but it doesn't even involve a food truck anymore, they opened a permanent location at Century Square.

Vittles - This was seen summer 2014. It was a trailer operated by Gumby's serving sno-cones, pizza rolls, and chicken legs (the latter two obviously prepared off-site).

Chef Tai's Mobile Bistro - Moved inside campus due to a contract.

Southern Comfort Road Trip - The old Village Foods food truck which in fall 2013, was the new home of Hebert's Cajun Food dishes. Their already-borderline prices had gone up, but it still felt like it was putting the universe one step closer to being back in balance.

Mr. Chinese Burger - I wanted to like it, but the burgers I had needed reheating...and they were shut down by the health department at least once. Still, I was amused by the (possibly deliberate?) broken English menu ("One Chinese Burger", "Two Chinese Burger", etc.), they sold pulled pork on chewy steamed buns.

THE PRESENT!
Today, of course, it's yet another student housing residential tower, known as Aspire College Station with 16 stories (including parking levels) and 800 beds. BB&T actually moved back in. By 2019, it got Fajita Pete's, Which Wich, and All Phone Toys. APT occupies a forgotten space on facing Church Avenue.