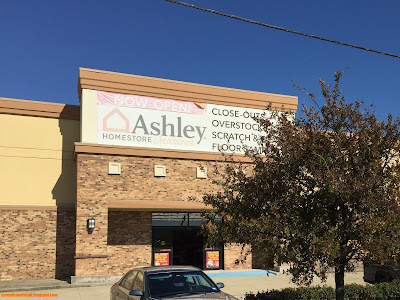 Picture from November 2019. That "NOW OPEN!" has been up there for over three years.
Navarro Drive was originally a road in the part of the Southwood Valley subdivision that had duplexes. It ran from Rio Grande to Welsh, with stop signs at Welsh and Pedernales Drive, neither of which had stopped cross traffic. It ended abruptly on the west edge of town, with no cul-de-sac. Meanwhile, over on Wellborn Road, there was a small private road called Elbrich Road, which was a dirt road that led to a small self-storage facility. It was a lonely little property with a few sodium-vapor lights (or mercury-vapor), and lacked a formal name. Just further up from the storage unit was a private dwelling, but it wasn't able to be seen from Wellborn. On the other side of Wellborn was Cain Road. But circa 2000, Elbrich and the house were destroyed and replaced with a large extension of Navarro, which included a very wide stretch with more duplexes. Still, while Navarro now connected to Wellborn, it felt lonely and empty at that corner.

Fast forward to 2007, when a sign announced that a small strip mall, anchored by Ace Hardware, would open. Over 2008, I saw it go from a foundation (March 2008, en route to Houston for Spring Break) to a full plaza. "Wellborn Shopping Center" opened in 2009 (I think the Ace may have opened in late 2008), though it originally opened as "Navarro West Plaza", which I think is a better name. Note that the tenants for the PDF have several errors.

It seemed so cool that "Ace of Aggieland" (at 11907 FM 2154) was a "small" hardware store so close to home -- it came in years after Doug's, Furrow, and Paint & More all closed. Ace was the place for my family, as it was the closest hardware store, and actually was a place where you could walk in and explore. Unfortunately, it didn't have the same feel as Furrow's, which I sorely missed: it had a lot of home decor and random kitchen junk, and was smaller. It did have a lot of the things that Lowe's and Home Depot had, which made it convenient for getting small but common components. And although it didn't have candy, it had free coffee and popcorn, which most (all?) Ace hardware stores had.

However, Ace did not ultimately last long. Not too long after it opened, Wellborn Road began a widening process that made access difficult, furthermore, Lowe's opened a superstore at William D. Fitch and Highway 6 in fall of 2010. Despite being about four miles away, it sapped Ace's customer base, and between these two factors, Ace folded in late January 2011, without even a going out of business sale. Liquidation came in March, whereupon it officially stopped being Ace Hardware.

The store remained largely vacant even as Wellborn Road concluded construction, though it saw a few interim uses before an Ashley HomeStore Clearance (later Ashley HomeStore Outlet) store opened in May 2016. Current stores (besides Ashley) are as follows:
Caminos Mexican Cafe - From 2009 to 2020, this restaurant was Fat Burger Grill and basically the same thing as Fat Burger in Bryan (and the former Northgate one). Despite having a near identical menu—even the old "Bevo Burger" was still there with a full pound of meat, I believe the restaurant was a franchise of the other locations. In late 2020 it was sold and reopened as Caminos Mexican Cafe (aka Caminos De Michoacan Mexican Cafe).

Note that the PDF above confuses Fat Burger Grill with the West Coast chain Fatburger.

Caminos replaced Fat Burger Grill, as mentioned above, and Fatty's replaced Mak's Liquor. Mak's Liquor was next to Fat Burger Grill and survived for over 10 years. It pulled out around the time not long after the new Twin Liquors opened at Jones Crossing (larger and easier access) and went to that shopping center between Rock Prairie and Graham (next to the Chicken Express). During that time they painted their signage blue but now that has mostly flaked off after a matter of months (back to red again). The PDF calls this "Max's Liquor" for some reason. Then there was "All Phone Toys" (opened in 2009, closed around 2013, vacant since) and finally Mpower Physical Fitness (operated from 2015 to around 2019). Some old PDFs mentioned "Shoe Bar" in this place (never opened, or maybe it was storage). After a while it got a real tenant (long after APT closed down), but it has also since closed (signage remains). 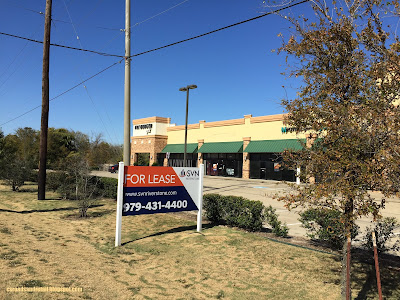 Another view of the shopping center.

UPDATE 01-24-2021: Updated Fat Burger's space and also changed something in relation to an unmarked summer 2020 update.

UPDATE 09-18-2021: After over five years, Ashley HomeStore Outlet (renamd from Clearance) FINALLY has permanent signage. Also made some changes to separate former and current tenants. Also, at some point in early 2021, the center received a repaint to white and a dark blue-green color.
Posted by Pseudo3D at 7:26 AM 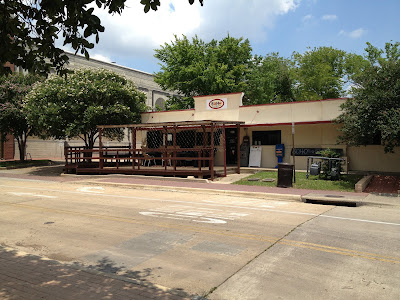 It's not even a grey building! (Picture by author)

This little building "officially" has the build date of 1997 but it's older than that. When I did the research for what would be Battle for Promenade - 301 Patricia, it mentioned it was a "converted garage". Ownership data mostly bounces around with banks, but prior to 1990 it was owned by "Meiller Research" which is listed as "The Meiller Co." in the phone book in 1989 at 315 Church Avenue. When Burger Boy moved in, two other addresses, 317 and 311 were created. The name of this post is taken from the ownership company of the building.

At 311 (facing 2nd Street), Burger Boy continued its legacy. It was their fourth location, starting with 300 North Texas Avenue in Bryan (La Familia Taqueria's current location), later where Fat Burger is now (in Bryan), and finally 301 Patricia before moving there.

While I never went there myself there is a menu and other photos from the second Northgate location. After over a decade of continuing to run Burger Boy in the new location, in early 2010, George and Tara sold the restaurant to Ken Simmons, who moved the restaurant to Westgate Center where it shuttered for good. Meanwhile, at Northgate, it was replaced with Front Porch Grill, which would've been forgotten if not for Internet users and Yelp!. It closed after some four months. It later became Daily Ruckus, which was around in 2012-2013. I rarely ate there since the operating hours were so strange, and when I did, I wasn't terribly impressed with their "batter something and throw it in the deep fat fryer" fare (it's more than that). The odd operating hours and rinky-dink operations led the place to be closed after about two semesters. They had a lot of random 1990s stuff drilled to the wall, including a Super Metroid cartridge. In fall of 2013, Joy Luck Fusion "opened", boasting what would be a second location of Joy Luck Chinese & Sushi, but it never really opened for more than a test run (if at all, as the review on Yelp is highly suspect). This non-starter was replaced with a sushi bar called "Aggie Time 2 Go". This took over in spring 2014 (others included VHS tapes and a Goosebumps book), the Super Metroid cartridge was gone. AT2G never lasted long either (never ate there), and by summer 2014, it was already replaced completely with a bar called Soho, offering "wine, beer, wings, and music" (the picture is from May 2014). Soho DID update the décor (mostly just painting the walls black), but soon it was gone and replaced by Potato Shack, which moved from the Sparks Building and closed in November 2017. It was soon replaced with a similar business, Baked or Fried.

Over on the Church Avenue side, is Rough Draught Whiskey Bar, since August 2015. During my time at A&M it was the home of MaroonBikes, at 313 Church Avenue. Hawking their (rental) "airless, chainless bicycles", the tires are solid and chainless because the pedals are directly connected with the wheel, but it's not cheap to rent (better off getting a cheap bike from Walmart, Target, or Academy). MaroonBikes moved into their spot on August 1, 2012 though I don't know where they were prior, or when they moved out, or where they moved out (last update on Twitter was January 2014, probably going out of business). Before that it was MacResource Computers @ Northgate. As for MacResource, it did not do repairs on site, and mostly had some software, a few display computers/iPads/iPods/iPhones, but no on-site repair, meaning that you could drop off your computer here but they'd take up to Bryan and back, so it was only of use to customers if they actually lived within walking distance. In May 2012, this was cemented when they moved into the MSC, which helped the "walking" part but hurt Northgate-area customers and anyone with a car. My records show that it opened in October 2009. Before MacResource, it was "Finders Keepers", an apartment locator service. This may have been the oldest tenant here.

Finally, there was Jin's Chinese Restaurant (315 Church Avenue), related to the now-defunct "other Jin's" at Nagle but not the T. Jin restaurants. I'm not sure when it opened (it was open in 2005, for sure) but while fairly popular, it burned down in the early morning hours of December 1, 2008 and never reopened. I've actually heard nice things about this place, including having "real" Chinese food...spices instead of sauces, and healthy foods instead of deep-fried meat so typical of your garden-variety food court Chinese.

It never reopened became instead Happy Yogurt. Happy Yogurt was supposed to be a trendy spot with boba tea, frozen yogurt (but not by weight), American & Asian food, and a trendy place to hang out. It had blue and white tiles, and certainly looked the part. Unfortunately, it was an overpriced place that served primarily reheated frozen food that you could buy at the supermarket (except with jacked-up prices) and served on paper plates. This was not even properly prepared--it's not like they deep-fried potstickers instead of microwaving them, or added special ingredients to make the food more worth it...it ended up being a drunk-food hangout (most of their business was after dark). They reduced hours and eventually quietly folded when the ruse of a "trendy place" wore off and people realized that their food was terrible. Here's a picture of the now-closed Happy Yogurt, here. That said, the décor inside isn't bad, and it's a shame that the space isn't something that can utilize it, like a good hole-in-the-wall ethnic food place. The Happy Yogurt signage eventually disappeared, and since 2016 it has been "BBQ 13-0".

UPDATE 03-25-2022: Disaster struck in October 2020 when the building was affected by arson, with two fires started in the building from arson. BBQ 13-0 got the worst of it (link) but all three businesses were affected. Only Rough Draught reopened.


UPDATE 09-04-2022: It appears that Baked or Fried did not reopen after the fire. Smoken Joe's opened in late 2021, ending the 20+ year streak of restaurants in the spot. Also, the 315 Church Avenue is to open as "Rough Draught Brick Oven Pizza Bar" but does not seem to be open yet.