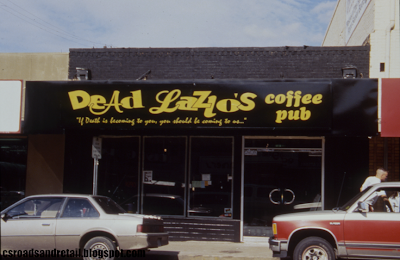 Courtesy Project HOLD. Sadly, those funky oversized door handles don't exist anymore.
Dusting off something from a longer post all in favor of integrating into that new "directory" project discussed previously, the space that is "Foundation Lounge" today (which was "Foundation Room" until maybe 2012 or 2013) was a long series of shops and restaurants that I have yet to fully document.

The earliest record I could find for this building was a store called White Auto Store at this spot in 1972.

In the early 1980s, this was a store called The Drafting Board, an engineer's supply shop (reminder: there were less computers than today), which lasted from 1980 to at least 1984 (formerly "News Office Supply", according to a 1980 phone book).

Later on it was called A&M Steak House by c. 1989 (hamburgers, apparently). After that was shortly another store, Condom Station (at the zenith of Northgate's decline). Condom Station may have actually lasted a few years before closing. 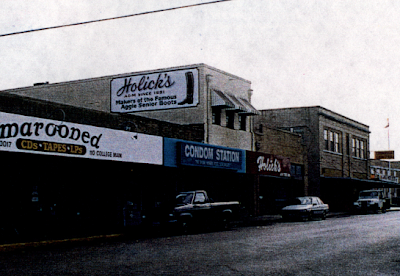 "We've Got You Covered" is what the small text says.
This was Dead Lazlo's Coffee Pub in 1995, which lasted a few years too. A newspaper article I read (I don't have it with me but if it turns up, I'll cite it) mentioned that Dead Lazlo's was owned by Sweet Eugene's House of Java which is still alive today. Given how crowded Sweet Eugene's gets, if they still owned a coffeeshop here on Northgate under any name, it would do spectacularly well.

Copacetic (or Copasetic, I've seen it both ways) Café in 1998, and Foundation Room later (which has even more recently changed to "Foundation Lounge"), but not before briefly becoming a bar called The Groove in the mid to late 2000s, which had live music. The Groove was around as early as 2004 (citing The Eagle archives) and as late as 2007 (Google Street view and a restaurant report card). The Foundation's current ƒ logo used to be a Comic Sans-esque "G". Not counting the name changes of Drafting Board or Foundation Room, that's been 8 tenants over the years, but there's probably more...

UPDATE: Here's a comment posted from 2016 regarding Dead Lazlo's from Mikes Teks: Just wanted to confirm that Dead Lazlos was owned by the same people that owned Sweet Eugene's (back when coffee came in ceramic mugs/cups and not paper cups with lids). College Main was closed due to a major reconstruction project during its first year of being open which hurt business. After its biggest supporter among the owners of Sweet Eugene's left (he used to part his Motorcycle inside Eugene's when he worked there, cool guy) they turned it into the Copacetic Cafe (or so pathetic Cafe as we called it) Same owners and coffee, but no longer had a Gothic feel to it and it soon after I 'm told. Best 2 years of my life in BCS was spent at Dead Lazlo's. Non-smoking section was in the back and the Coffin by the bar. Good times.