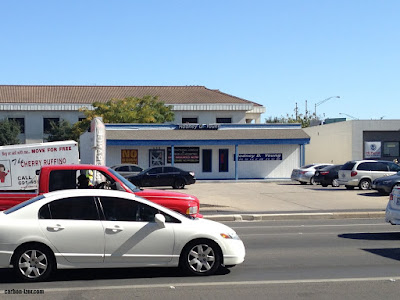 Picture taken late October 2015, shortly before rainclouds rolled in and drenched the town.
The rather ragged-looking "Rodney D. Young Insurance" at 413 Texas Avenue, which looks like a candidate for demolition should something better come along (the Exxon at the corner is constantly being ragged on as being an eyesore in a prime location). It was a Pizza Inn (No. 65) opened in 1966 and remained operational until sometime in the mid-1980s (and I'm not sure when Rodney D. Young came in, since I don't have city directories, only a few phone books). In 1989, it was Star Video and by 1993 it was EZ Pawn. As of January 2018, the location is no longer Rodney D. Young Insurance, it is now Legacy Tattoo Lounge.

It's also worth noting that there exists a "Pizza Inn Express" (just a counter) at the Chevron at Holleman and Deacon (opened in fall 2018).