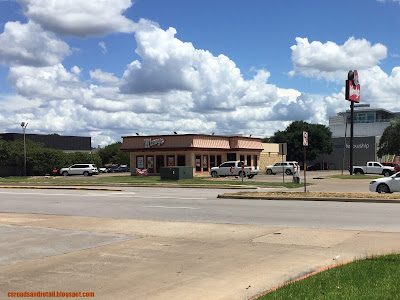 Picture from August 2019
Despite my ambitions, the new "Return to Texas Avenue" series isn't going too well, partly since I already made many of the more interesting posts years ago, leaving a collection of odds and ends including photos from over five years ago. This is in contrast to the start of the Harvey Road series, in which all the photos were taken at the same time and in close succession, giving about half a dozen new posts clustered together with a bit of a story behind them.

The Wendy's on 202 Southwest Parkway East was built in 1984 after the previous Wendy's in town was opened (3216 Texas Avenue South in Bryan, which was built in 1978 but closed for the last 15 years or so) and I don't think this location ever had a salad bar, though I could be wrong. I don't remember one ever being there, and I don't think I ever (if rarely) ate here after a newer location opened much closer by to where I lived.

Additionally, the sign has the newer logo (which is not on the restaurant itself) partially due to the fact that a storm wrecked the old sign with the signage being replaced with the newer one.

Future attention on the blog will be paid to posts currently off the Index, which will return in updated forms. 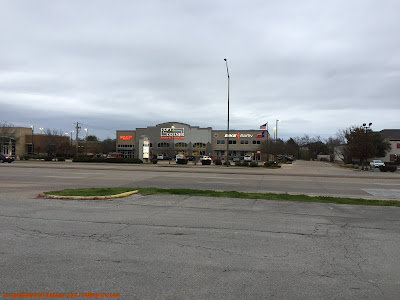 Why is the building two-toned? It's a good question that won't be answered.
Across from Brazos Square is 2307 Texas Avenue. Built in the early 2000s, seemingly as a refuge for displaced Redmond Terrace tenants, it features a Kolache Rolf's, Copy Corner, and Texas AggieLand Bookstore. Not much has gone on here recently tenant-wise with the exception of Bike Barn, which opened in July 2015 after the bookstore closed about a year or two prior.

The three tenants also feature entrances to one another near the exits, so you could go from Kolache Rolf's over to Copy Corner (provided both were open at the same time) without leaving the building. Additionally, Copy Corner has an upper level, though it is just for employees.

Prior to the construction of the building there was a Quicker Sticker, which had been there since 1988, and sub-leased the building, with one such tenant being Home Brewers Supply (1994-1998). Behind it was a driveway that connected to Quicker Sticker also led out to about three houses beyond it (presumably with Texas Avenue addresses). The back part of this driveway continued to exist after the new building was built, but after the last house was torn down around 2015 most of the space was redeveloped as The Villaggio Condominiums, accessed from behind the Quality Suites and featuring Brentwood addresses.

Oddly enough, despite remembering a lot of Texas Avenue from New Main to Brothers in the late 1990s/early 2000s, I don't remember the Quicker Sticker at all.
UPDATE 01-01-2021: Made a small update where I accidentally put "brewing company" instead of the homebrew store that was there.
UPDATE 09-20-2021: Added name of said homebrew store, clarified regarding the townhomes. Further updates to this entry are coming.
Posted by Pseudo3D at 10:56 PM