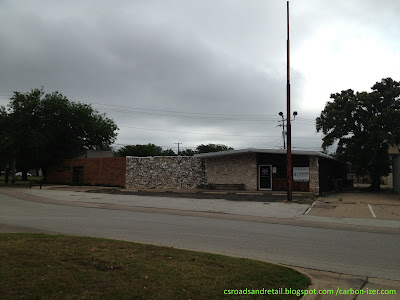 Picture from author, May 2014
For many years (at least since the early 1990s), Alfred T. Hornback's was located in Eastgate at 120 Walton Drive and featured a large floor with pool tables and country music. Eastgate was not a huge draw like Northgate was and it closed permanently in summer 2011 though remained open for special events a few years following. It's currently occupied by DC, Inc., after DC (Dixie Chicken, not DC Comics) moved out of the building that later contained Blackwater Draw Brewing Company. There's also a small professional office (122 Walton) that has dental offices (Dr. Dwight Hirsch and Dr. Monica Brown as of this writing). The building was built in 1967 as the Eastgate location of Ralph's Pizza, which it would be until 1973. In 1980, it was the home of Texas Moon Tavern, which featured steak, burgers, and beer, and while it had a different address for some reason (124 Walton) it had the same facade. The only mention of this restaurant on the entire Internet comes from this page though there's another ad for it I found. It was also the home of an even older bar called Sparky's, which is talked about more than Texas Moon Tavern. A comment from one Jim Gates on the old Eastgate page mentioned this about Sparky's: "A bar with a blacked out room lit by - you guessed it - black lights and painted in fluorescent paint graffiti. There were also two neon snow flake looking things on a tall pole overhead that flashed back and forth." 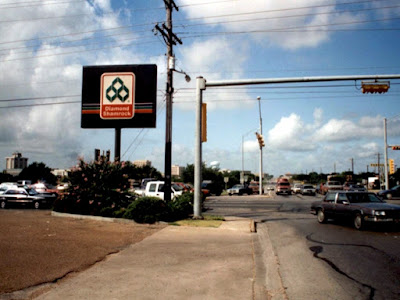 Located at 501 Texas Avenue South, this Diamond Shamrock existed from 1989 to around 1998 when it was closed in the process of the Texas Avenue widening. The convenience store probably wasn't even a full brand, not even Diamond Shamrock's "Corner Store" (which existed at least as far back as 1990, but I don't believe for any of the local locations until they were converted to Valero). Afterwards, it was absorbed by the U-Haul dealership (formerly Texas Avenue Moving Center) located at 519 Texas.

Diamond Shamrock had previously been a Sigmor Shamrock store (a predecessor company to Diamond Shamrock, though it might have converted to Diamond Shamrock briefly before being rebuilt, as at least one Sigmor store saw a conversion), as was a few others. The U-Haul dealership appears to have originally been on the site of a Philips 66, and records indicate they used a building leftover to do operations, but after Diamond Shamrock died, they moved to that building and removed the old one for more parking.

The style of Diamond Shamrock (black, multiple colors) had to have been more common but no pictures exist of that style on GasSigns.org.

Prior to Sigmor Shamrock, it was Mais Super Market (sometimes used interchangeably with Louis Mais Grocery), which dates back to the 1930s.

Despite having a Facebook page for this webpage which I (try to) update weekly, I despise Facebook. However, there is one group, "Bryan-College Station: Now and Then", which usually shares my posts with their larger audience, had a bit more on the actual backstory of 501 Texas Avenue South. I can't guarantee that this link will work without the page bugging you to sign in, but the page description has been recreated here with minor edits made for clarity.

We are so happy to share these photos that were contributed by Jeff Mais, who said: "This was the Mais' grocery store that was located at Texas Avenue and University Drive. Actually it was in the path of University Drive and was torn down due to "right of way" for the expansion of the road to the bypass. My grandfather Louis Mais and his wife Lydia started the store in the 30's. It began with Louis running a small gas station. He eventually bought the gas station. Aggies would use the location to catch the bus there and would often asked if they anything to eat. He started selling sandwiches and then just kept adding items that were in demand. Soon he had a small convenience store that made deliveries, and got rid of the gas pumps. Then Louis built a bigger store next door to the old one in the 50's which had a meat market, produce section, and also sold barbecue. My dad Donald tells me that he used to deliver groceries to Bear Bryant when he was the head football coach at A&M. As a child, I remember many people gathering in the back of the warehouse after hours to drink beer and talk about their hunting and fishing tales. The store was closed in 1969 to make way for the new road. Louis and Lydia Mais were hard working people who love the community.

The photos were taken by Donald Mais, who was the son of Louis and Lydia Mais. I am the grandson of Louis Mais (Jeff Mais). I lived in College Station until I was four (1966), then we moved to Houston where I grew up.

As an additional note, the gas station was a Conoco. Despite dramatically shaving the right of way (the building of Mais was almost perfectly where the modern eastbound lanes of University Drive East go, there was enough space at 501 Texas for a new gas station. "Fill-Em Fast" opened in 1972 which became a Sigmor station (#997) which was built in 1978. At some point in the 1980s, Sigmor began to rebrand its stations as Diamond Shamrock. It's unknown if this station ever got the brand changeover, but in 1987 the station was torn down and rebuilt as a Diamond Shamrock (still #997). This is the building that exists today.

From a phone book, though the exact year is unknown.
This building is unremarkable but has anchored the Northgate for years (Street View here). The lot was vacant in 1961 with no parking (possibly a former storefront that was burned/torn down years earlier). The modern building was built in 1968.
The first reference to the building I can find is an establishment known as Iva Starnes Men's Wear, which had locations in Bryan (and Houston, at "Fondren at Westheimer", though no exact address) in 1969. In 1971, it became an establishment known as "The Pub" (though directories refer it as "The Tavern"). In late 1973, Kesami Sandwich Shoppe ("Where No Two Sandwiches Are Alike!") replaced The Pub, which lasted until around 1976 and by summer 1977 it was Farmer's Market Sandwich Shop, a limited menu version (it later became full line) of Farmer's Market Bakery and Delicatessen in Bryan. It sold sandwiches, soups, salads, and fresh baked goods before becoming Gideon's Farmer's Market (adding catered meats to the Bryan location and pasta, pastries, and beer to the Northgate location--free delivery to dorms, too), and then closing the Northgate location, which became Equinox (the Bryan location closed later). It was somewhere in the long history of being Gideon's/Farmer's Market that it absorbed 331 University (likely 331 University used one of the dual entrances in the building, though Basil Whippet's removed one of the entrances).
The upstairs area, 331 University, was home to smaller offices and tenants. Shamrock Employment Service (Shamrock Employers) was here in 1969, and by 1972 (according to a city directory, there were three tenants, including a vacancy, Guinn & Co. (insurance brokers) and Kentucky Life Insurance Co.). Other tenants over the years included Homer B. Adams Realty Co. (1972), The Shape of Things (1975-1978, hair salon), Bear Paw Turquoise & Silver Jewelry (1975, jewelry). In 1984, it was the home of On the Double copying service.
At some point, 331 University was absorbed into the main building.

By 1993 the lower level was Equinox, and by 1999 it was Crooked Path Ale House. Somewhere between this time it was also Northgate Café, as well. In 2005 it was The Library. While having a bar with a name like that isn't too unique (seems like Michigan Tech had the same idea), The Library closed in 2008 or 2009 due to poor sales. BMO's, a rap-oriented bar, opened in the spot in 2009. It ultimately did not last more than a year. In 2010, it opened as Basil Whippet's Pub & Apothecary Lounge, and after closing in 2016, became "Icon Night Club & Lounge". The building has had a few exterior updates over time as well.

UPDATE 01-05-2020: Updated post to account for former tenants, including original stores inside.
Posted by Pseudo3D at 8:58 AM

The Tradition at Northgate 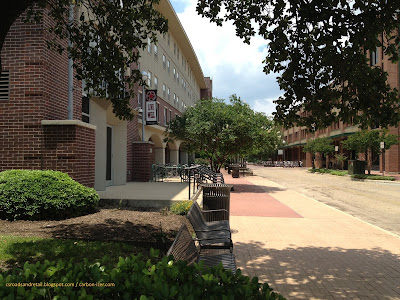 The road doesn't go much further than this.

"The Tradition at Northgate" (301 Church Avenue) began construction in 2000 with the parking garage construction in 2001. It likely opened in about 2002, as that's when most of Second Street closed off and became a pedestrian promenade, the remaining part of it turning directly into the Northgate Parking Garage (picture taken May '14). Prior to the Tradition, it was formerly a church, with the 1989 tenant being United Campus Ministry (likely something else prior).

(This post is updated and split off from what is currently called "Northgate: Church Avenue" at press time).