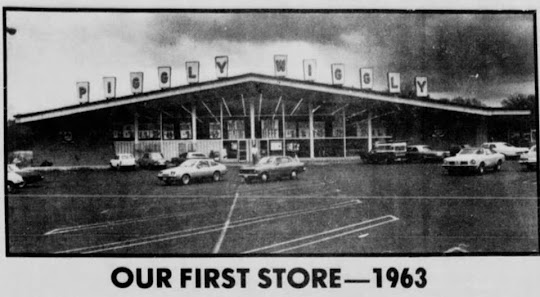 The building in its original form as Piggly Wiggly. It doesn't look like this today, thanks to a later facade re-do. Courtesy John Ellisor via Newspapers.com and The Eagle.

Even before the late Luby's served its first piece of fried fish, we had the first local location of Piggly Wiggly across the street from it. First opened in 1963, I can't nail down when it exactly it closed, but it seems to have been around 1980, give or take a year (and why it had an even number despite being on the odd-numbered side of Texas Avenue I don't know).

Piggly Wiggly in our corner of the world was owned by Piggly Wiggly Red River Co., which mostly owned the stores between I-20 and I-10 plus north of Dallas-Fort Worth, including Waco-Temple-Killeen, Conroe, Georgetown, Sherman-Denison, and Bryan-College Station. This was their first area store. In 1983, these stores were sold to local operator Six Star Foods, which kept three stores plus a store in Hearne limping along until they were closed in 1985.

Unfortunately, the Piggly Wiggly here didn't even last to the point where it was sold to Six Star Foods. Instead, the store closed, and in 1981, part of the store (suite B) was reopened as a discount grocery store, Jewel T. Owned by the same company running the Jewel-Osco stores in the Chicago area (and a play on the name "Jewel Tea", their original name), Jewel T was a discount store reportedly similar to Aldi and took residence in older-generation grocery stores. Unfortunately, details are sparse on this elusive store, and it didn't last long. In 1984, The Jewel Companies were bought by American Stores, and Jewel T was sold off to Save-a-Lot, but the Texas division was bought by Grand Prairie-based Shop-N-Sav and renamed Texas-T.

In 1994, Texas-T was bought from them by Save-a-Lot's parent company, SuperValu, and converted to Save-a-Lot (the rest of the Texas T stores were) before closing for good a few years later. It's not surprising if Save-a-Lot closed soon after, a failed stand in College Station is pretty much forgotten (and hey, that was an old Piggly Wiggly, too!)

After Save-a-Lot closed, it became Jacque's Toys & Books, a local upscale "learning toys" store. Now, Jacque's would claim it's been around since 1986 (the "start of business" time), but not in that space. It was originally called "The Toy Box" and located at 3806 South Texas Avenue (later home to Brazos Blind & Draperies) and in suite A from 1990 to 1998, and then jumped to Suite B following Sav-a-Lot's closure. Jacque's closed in September 2016.

If I have my chronology right, the left location (suite A) later became Brazos Valley Christian Books (coincidentally, located at 3808 Texas Avenue in the early 1990s) and later Pack & Mail, which closed in the latter part of the 2000s. It's now been subdivided once more, as you can see in my pictures. Because I don't have actual address-based directories, I haven't been able to ascertain what was in suite A after Piggly Wiggly's departure.

It's important to note that although Piggly Wiggly was at 4300 Texas Avenue, but while the shopping center is still called that, none of the stores have that address (which makes sense, at some point the address was corrected). Even before Sav-a-Lot left, there was one other "grocery store" at the center--at 4303 Texas Avenue (opened in 1988, as long as I can remember), was Brazos Natural Foods. The store had long been a purveyor of organic and gluten free items long before the mainstream supermarkets had them, but the store closed in early 2021. There are also additional storefronts on North Rosemary Street. 700 N. Rosemary is vacant (no clue what was there), 702 N. Rosemary being the long-time home of water purification company Jacob's Well (though the picture on their website is not of this location), and 704 N. Rosemary being Laina Salon (and formerly Nori's Hair Studio, though indications are it essentially renamed...and for a short time was "Nori's Hair Studio & Reflexology). The addresses jump to 710 N. Rosemary, and this was Awards & More, which was located here from 1999 to around the mid-2010s (it has since relocated). Today, the space being occupied by Curious Collections Vinyl Records & More, which has been here since 2017.

The current Google Maps imagery shows Aggieland Preschool Academy at the old Jacque's and Lone Star Quiltworks and BCS Fitness on the left.

UPDATE 07-22-2021: Rename to "Former Piggly Wiggly at Texas Avenue & Rosemary", minor rewrite, especially involving the backstory of some tenants and adding the Rosemary tenants.
Posted by Pseudo3D at 12:01 AM

The Diamond Shamrock at the End of Texas Avenue 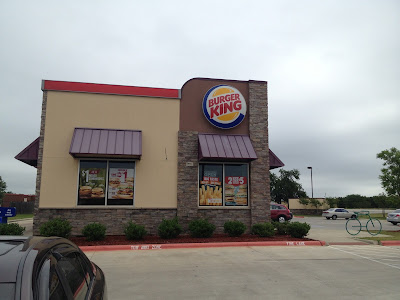 Burger King was the only occupant of the former Diamond Shamrock site for years. (Photo by author, ~2014)
This post is just on a Burger King (3129 Texas Avenue S). Before I get into that, let me tell you this. I would be lying to you if I said that nostalgia was not one of the driving forces behind this site. After all, I grew up here, and in these posts, published in the last few years and updated since then (such as this post, which received a rewrite nearly a year after its creation) detail most everything I remembered or should've remembered. I've already told about the shops and restaurants here, many of which I grew up, and in versions past of this site, even included things like my old schools, or Adamson Lagoon, and probably if I had more time and research, the doctors and dentists as well (the old pediatric dentist office is gone, with the old Scott & White building at 1600 University Drive East to come soon after).

This part of Texas Avenue, originally explored in a full post with all the descriptions of the stores nearby, including the pool store and the curiously unnoticed empty spot was really special to me in years past. You see, back in those days, the only reason why we would go this way is to go somewhere cool, like my uncle's house in Baton Rouge or perhaps Houston. Even in the early 2000s, there just wasn't a lot out there. Rock Prairie Road had stuff on it, of course, like the hospital, junior high school (whoops, middle school), or even the nice new Kroger that opened in 2000, but that was just about it. There wasn't even another interchange until Greens Prairie Road, and that just had the water tower and an Exxon/McDonald's combo.

Since the Highway 6 bypass was built in the 1970s, prior to around 2006, there was an intersection here with the southbound one-way traffic from the bypass intersecting with Deacon. To the south was Texas Avenue turning into an entrance for Highway 6 south with the northbound lane going from Highway 6. To the south at Deacon was a two-way frontage road that paralleled Texas Avenue up to Wal-Mart and became the southbound Highway 6 frontage road for the section south of Texas Avenue. Yes, for a time, you could drive straight from Nantucket Drive to the Wal-Mart parking lot and back without making a single turn or getting on the highway.

Around 2006, that all changed, and the set-up was altered. The road that paralleled Texas Avenue was cut off at an apartment complex, and the two lanes from Texas Avenue went to the frontage road south (now all one-way) or the highway.
The post here also features another change to the intersection: for years there was a Diamond Shamrock (listed as "Big Diamond No. 1" in some materials) that based on listings and aerials, opened between 1984 and 1989. It even featured a car wash station in the back. I'm not sure when it closed (2005?) but it was torn down by December 2006.

Opening in 2007 (late 2007, since the Villa Maria/29th location opened first), this Burger King opened to replace the one at Culpepper Plaza, which was torn down and replaced with a Chick-fil-A. Many years later, a restaurant was built next to the Burger King (in previously unused space), Boomtown BBQ Company out of Beaumont, located at 3125 Texas Avenue South. This restaurant opened in August 2020.
UPDATE 10-02-2020: Updated the post for the first time since August 2015 when the rest of the "end of Texas Avenue" material was largely stripped out, including more information on Diamond Shamrock and the new Boomtown BBQ, making the post the first to use the [2020s] tag.
UPDATE 10-27-2020: Date added for Boomtown BBQ.
UPDATE 07-06-2021: New name as part of eventual page re-do. Added [College Station] to post.
UPDATE 03-12-2022: Boomtown BBQ Company closed in February 2022.
Posted by Pseudo3D at 1:37 PM