The Lost Buildings of Villa Maria Road and Texas Avenue 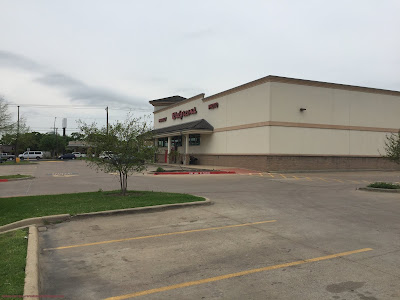 The Walgreens replaced a corner of several businesses before. (Picture from 3/30/20)

For a brief time between 1999 and 2005, there was a Texaco station ("Aggieland Texaco"), which became a Shell station a few years later, following an agreement with the merger of Chevron and Texaco which would see the Texaco brand almost vanish from Texas itself. This happened with a number of stations around town. 2907 Texas Avenue was the address based on pre-2005 "restaurant report cards" and 2909 based on tax documents. There were also some other stores in the strip, but I wasn't able to find out what they were, nor do I know what the Texaco station replaced. 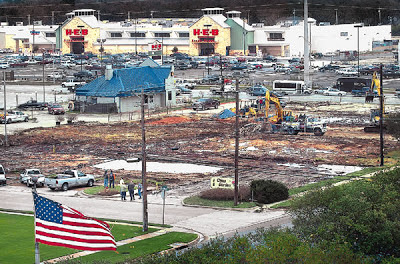 From The Eagle, though I remember that they had another aerial with the buildings still intact.

One of the things I do know was that many of the newer Shell stations (including this one) had started offering Krispy Kreme doughnuts, which were shipped in from the Houston locations at the time. Of course, Krispy Kreme donuts aren't all that after they turn cold, and the novelty probably lasted for a year at most before they were removed (the Houston stores closed soon after). It also had brown brick on the outside. 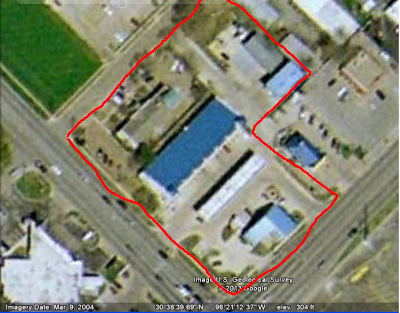 The buildings as they appeared in 2004

I was relieved that when they took out the block, the Golden Chick (blue roof in the picture above, and outside the red outline above) was not torn down, but by that time it was already closed.

Articles at the time mention a furniture store also biting the dust, but (and I assume it's the house-like building, possibly converted, on the Dellwood side) I wasn't able to find any information on it.

Soundwaves (2919 Texas Avenue) was the blue-roofed building: based on what I could find, it moved to Post Oak Mall after demolition before disappearing for good, but it was not part of Soundwaves of Houston, even before it was torn down (Soundwaves existed at that spot as far back as 1980). Other residual information says that Soundwaves did home theater installation, but in 1980, it did car audio installation. I read somewhere that the building was a head shop back in the '70s, but that's for another time (when Carnegie reopens, perhaps).

The building toward the back was China Garden (2901 South Texas Avenue), which had two levels, though the Chinese buffet had closed prior to being demolished. According to MyBCS, the rumor was the woman who owned it committed suicide, but I don't put a lot of stock in that (being a rumor and all). It was previously a Mr. Gatti's location before it closed at an unknown date. 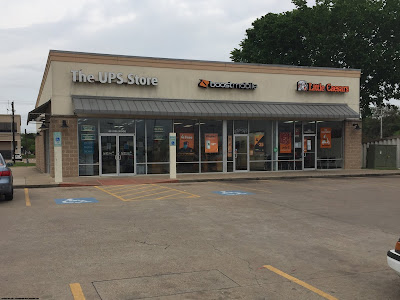 This other new building has a Dellwood address. (Picture from 3/30/20)

What replaced it was a Walgreens and a smaller building that was mostly vacant for years following, with a UPS store coming in first, then Little Caesars about five years later (opened in fall 2010), then a Boost Mobile a few years after that. Even though I did miss the Shell/Texaco station out of nostalgia (and it would be nice to have a modern gas station on that side of the road), the stores that replaced it had more usefulness. The building(s) that the Texaco replaced I also don't have information on. Remember, if you know something I don't, feel free to contact this site at admin@carbon-izer.com.