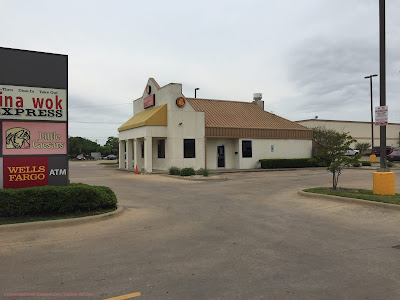 This may be the start of a series of posts near Villa Maria Road and Texas Avenue, but I can't make any promises. (Picture by author, March 2020)

No fooling...today's post is on April 1st, and it's a brand new one. This building, 612 Villa Maria Road, was built in 1979 and first served as a Tinsley's Chicken 'n Rolls (and originally 512 Villa Maria Road West), a restaurant previously covered on this site. It served as Church's Chicken from 1985 to 1989 after Tinsley's sold out, and Cobblestone Quality Shoe Repair between 1992 and 1995. It returned to food service (and fried chicken) when it served as a Golden Fried Chicken (later Golden Chick) between 1996 and 2000. Sometime in the 2000s (possibly as early as 2002, which Brazos CAD seems to indicate), it became China Wok Express. I thought it was around 2005...notice the the building has a blue roof instead of the current gold-colored roof (which ironically, came after Golden Chick closed). The circle where the China Wok Express logo is used to be where Golden Chick's mascot used to roost...I'm guessing that when it returned to restaurant use from whatever it was previously, Golden Chick did some significant renovations. 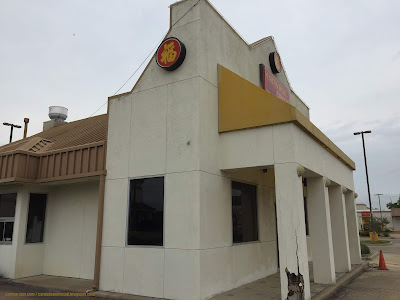 View from the southwest. Not sure if I've ever seen that neon on top light up.
As you may know, the government warnings for COVID-19 have put the economy into a tailspin, with restaurants only offering carry-out or delivery, but China Wok Express is not among them, closing entirely and promising to return April 8th. However, the menu board, as you can see below, is so faded that one can barely see the letters, and one of the columns has a big hole knocked through it. I'm not in the neighborhood very often, so I'll have to see if China Wok Express will reopen or if this is their swan song.

Allegedly due to the ongoing COVID-19 crisis, China Wok Express is now closed, with promises it will reopen April 8th, but it's doubtful as the menu board (and general maintenance) are clearly in a state of visible decline. 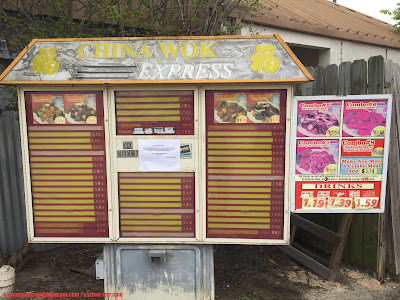 The menu board is so faded it's almost completely illegible.
By the way, the article linked above (mentioning the former blue roof) is the old Villa Maria/Texas Avenue article that has been updated with revised information and new photos.