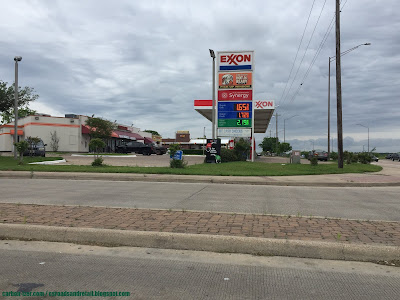 There was another Exxon located on Rock Prairie's other end. More on that another time. (Picture by author, Apr. 2020)
Sometime around 1997 or 1998, Rock Prairie Road was extended from Victoria Avenue to Wellborn Road, eliminating the need to trek back on North Graham toward Victoria. Within a few years, an Exxon station was built and later, a stoplight (I'm pretty sure the stoplight came before the railroad crossing--which upgraded and extended Gandy Road into a full extension to North Dowling Road).

This Exxon station (at 12727 FM 2154) anchors the southeast corner of the intersection, with the Shell station coming in about 3-5 years afterward.

Brazos CAD isn't all that clear when everything was built, indicating the car wash was built a full two years before the convenience store was in 2000. In the first year or two, the Exxon featured an A&W restaurant, which had returned to College Station-Bryan after a 20+ year absence (there was a location near the modern-day intersection of University Drive and Texas Avenue, but that's for another post). A&W's attempt at what was then south College Station didn't last long at all, and I had to make sure of it through some digging on Project HOLD to make sure it wasn't just the power of suggestion getting to me, but by early 2001 A&W was gone, and a Sonic took its place in the summer of 2001. The addition of Sonic added the traditional Sonic canopies to about seven parking spaces, and evidence suggests these were functional carhop spaces.

In 2008, the Sonic moved to a new space next door and the space was abandoned. By early 2009, it was operating as Taco Casa, which reused a lot of Sonic's infrastructure by painting the red trim on the canopies orange to match Taco Casa's branding scheme. But it too closed after a few years (sometime in mid-2011). It didn't help Taco Casa's case that 2009 and 2010 were plagued with major construction. The Exxon actually lost about a dozen parking spaces in the front, with an entrance to Rock Prairie also closed (though that became three new spaces). Sometime within this same time frame, the signage updated to electronic numbering.

Finally, around early 2013, the space was filled with Little Caesars, which ditched the interior seating for a walk-up counter and the only Little Caesars in the area with a drive-through.

The main "Tigerland Express" food mart was there from the start, with a third tenant serving as a liquor/tobacco store (but is only accessed from the inside, despite the presence of an exterior door). Finally, the car wash is next to the convenience store.