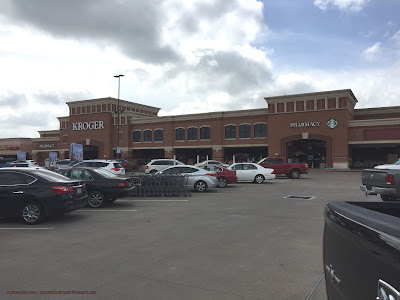 The "Pharmacy" on the right originally held the "Signature" logo.

In the adventures of of this website thus far, we have covered all the former Albertsons and all the former AppleTree stores, but haven't gone too deep into the grocery stores currently in the area. That is about to change, as we are about to tackle Rock Prairie Crossing, a shopping center built in 2000.
The shopping center is anchored by Kroger (3535 Longmire) and had massive success, as it had (for about a decade) the distinction of being the farthest-south grocery store in town, and is usually still pretty crowded.

The Starbucks wasn't originally there, it appears that according to the map, it was an enclosed cart area (the carts were moved outside after Starbucks), but it did appear after a few years, either opening before or around the same time the Albertsons up the street did.

It features a prominent and open mezzanine; however just for offices seems a bit of a waste, it almost feels as if the upper level was meant to be used for additional seating or some other purpose, given the (original) presence of a daycare and all that. The Randalls store in downtown Houston (though given how much the chain continues to shrink, I don't know how long it will last) also has an upper level like Kroger's but is well-utilized. You can sit down with your items purchased from the Starbucks up there or other items (like the deli or the bakery) and eat them while having nearly a full view of the store below.

As for a basic description of the store, it's around 63,000 square feet, has a bakery, deli, produce department, meats and seafood toward the far back right of the store, then pharmacy to the right, with some space cut for the "curb-side pickup". I did not take any pictures of the store, partly because you can find it elsewhere. The decor on Yelp from 2010 is still the Kroger's design now and Google also has a few photos (but it's contaminated with stock photos that look nothing like this store).

The Kroger currently has "Fresh Fare" décor with tiles featuring orange and green accents ("Millennium Decor") but it may have the Neon Decor.

I actually did acquire a store directory back when the store first opened back when the store's moniker "Kroger Signature" actually meant something (the name was removed sometime last year as of this writing, to just Kroger). This can be seen at my main website, Carbon-izer. While this Kroger did have the day care area, it did not, to my knowledge, have the food court as the 1993 Houston store did.

Nearby is the 3505 Longmire building.

Suite A - This has been DoubleDave's PizzaWorks for years, pretty sure it was an original tenant (so no "suite B"). Originally, there used to be a big glass window where you could see pizza being prepared (with a step for the shorter people in attendance). At some point, it was re-arranged to have that be an open window and the area blocked by the buffet table.

Suite C - Formerly home to FabricCare Cleaners, which moved to a new strip center off Highway 6 (in Tower Point) around 2016-2017 (roughly around that time). In 2020, AnyLabTestNow took up the space.

Suite D - Currently home to a Jimmy John's, which opened around December 2013, after two other locations in town opened (the University Drive East location and the Texas Avenue/Holleman location). It used to be Blue Kangaroo Children's Boutique, which opened in 2004. It may have been something else before that. 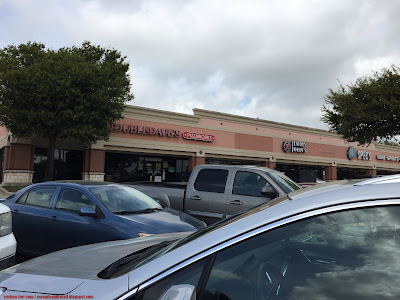 Despite parking under trees being a danger, this shopping center is always crowded.
Suite E - Was the home of W.E. Gibson Insurance (possibly original), then became the home of Athena Learning Centers in 2013 but closed five years later (likely due to lease issues). It has since been absorbed into Spec's.

Suite F - The former location of Maggie Moo's. I don't know when it closed, probably late 2000s (Googling shows it was definitely open in 2006) then absorbed into Spec's. The franchisee later took to Southwest Crossing as "Harold's Hot Dogs & Ice Cream" until it eventually folded.

Suite G - Spec's Liquor is here, it used to be a modern location of JJ's Liquor. After Spec's bought the JJ's Liquor mini-chain, it renamed and expanded into the former Maggie Moo's space.

Moving clockwise, there's a CVS/pharmacy at 1800 Rock Prairie, which I didn't photograph but it (like almost every CVS in Texas prior to 2005) was an Eckerd originally. I didn't take a picture of it, but the Google Street View people did. A bank building, located at the corner of Longmire and Highway 6, isn't part of the shopping center. 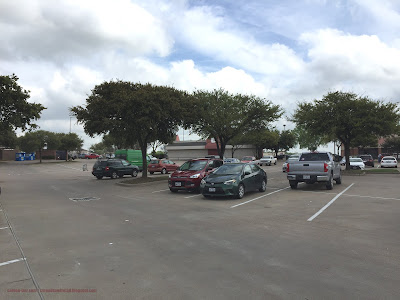 You can see where it was repainted, as the pre-2009 Jack in the Box logo was tilted at an angle.

The next plot is a vacant space, an empty Jack in the Box. I think it was built a bit after the Kroger store, so maybe 2000 or 2001. It first temporarily closed in summer 2017 due to ownership transition (to corporate from franchisee, along with the other stores in the area). It briefly reopened around the fall of that year, but sadly, the reopening was short-lived and it closed soon after (probably a month or two). As the blacked-out Jack in the Box logo on the signage still shown through on the main shopping center (still never updated to the 2009 logo), it made me sad that I couldn't head down there after dark from my then-home at Longmire (I lived briefly at Longmire and Deacon) to pick up food, and only reminded of Jack in the Box's fairly wide and diverse menu from commercials nearly four decades old. It was one of my go-to places in spring 2017 when I didn't live at Longmire (but lived in the general area), going there for the late-night "Munchie Meals" after my shift ended at a call center near Highway 40, which is where I worked at the time. One of the drive-through windows looked bashed up; clearly someone had tried to force it open as part of a robbery attempt. I also think the access problems had something to do with it...

There's another building (3515) with the UPS Store (suite B) and then T. Jin China Diner (sit-down Chinese restaurant) and the UPS Store (in suite B), don't know when either opened, then another strip to the immediate left of Kroger (3525).

Suite A - Cotton Patch Cafe has been here since the early 2000s, and I ate here once or twice. Haven't been back in a number of years.

Suite D - Because Cotton Patch takes up so much space, there's not an A through C, and suite D is occupied by Freebirds World Burrito (always a good lunch option).

Suite J - Used to be GNC, now "American Shaman", selling CBD oil products. Pretty sure the former (original?) tenant GNC was shut down in the round of closings in 2019.

Suite K - Eye Trends as of this writing, though a sign at the corner of Longmire and Graham promises a new location.

Wrapping up on this shopping center, what was mildly interesting is the fact that the center's first few years had NOTHING across the highway, with only a "two way dead end" sign at Rock Prairie's other side. There's also a large right of way between the highway frontage road and the frontage road; this was created when the frontage road was rebuilt around 2008.