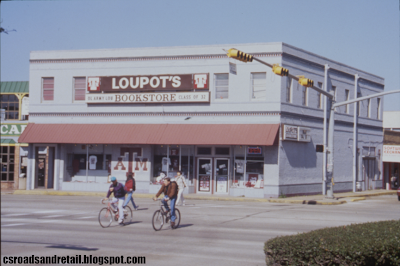 Prior to when College Main was closed off (June 19th 2012, a day that will live in infamy), it was the only block which was resembled a dense city in College Station. And sitting on the corner of this block was Loupot's (335 University Drive), which closed the same year (in March). One of the oldest establishments on Northgate and once the "official" bookstore on campus, Loupot's had been around for years, though from what I've read, it wasn't always in the building, and when it was, it wasn't in both levels.

From what I've found, it wasn't bought by Loupot until 1979, and in the past, Loupot's was named "Loupot's Trading Post" and "Loupot's Books & Britches". The upper level was added in the 1980s not too long after the building was bought, as that had been the previous home of an X-rated bookstore (The Adult Library, though I read an ad that mentioned it being the home of "Sun Theater", same business, different name). Some ads I had found (but sadly don't have a copy right now) mentioned that they had shows for a quarter (and escorted ladies were free), which was around in the 1970s and 1980s. This had an address of 333 University. The adult theater was upstairs at 333 University, with Loupot's downstairs. At some point, they eventually closed and Loupot's ultimately would expand upstairs.

Anyway, Loupot's managed to expand to a few different locations, namely a location in Southgate (now home to TexAgs) and in a location at Holleman and Texas Avenue (now Salata). These closed shortly after the Northgate location. A fourth location was planned (according to a sign) to the grassy area just north of Blinn College on Villa Maria (where Blinn later added more parking). Loupot's continued to maintain its large store on Northgate, which later upgraded to electronic signage and made Internet history with its "reverse-boarded up windows" in 2005 (around the time of Hurricane Rita). However, in 2010, the family sold to Nebraska Book Company (Neebo), which already owned the Traditions bookstores (formerly Rother's), and then they started closing stores. The Loupot's-branded stores went away in March 2012, but eventually, their other stores, branded as Traditions (Southgate, University Square, and one closer to Blinn at Briarcrest and Villa Maria) closed as well.

One of their last messages on the message board was "HOLY CRAP!!! TEXTBOOK RENTAL SALE!!!", which always felt a bit tasteless due to the mild swearing but that distracted from the fact that if they're selling rental textbooks, they're probably going under. 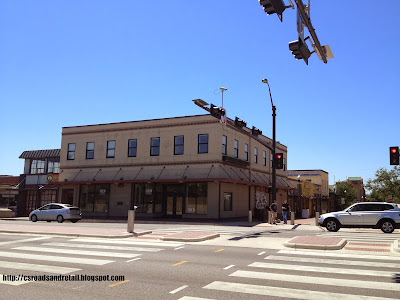 After Loupot's closed, by late 2014, it was to become a place called Z Bar & Bistro, which made me hope it was something better than The Corner across the street (sticky chairs and tables, smells like old beer constantly, poor service), though it eventually fell through.

As of early 2016, there appears to be some work going on at Loupot's. It will probably be a bar, but it's better than an empty building, right?