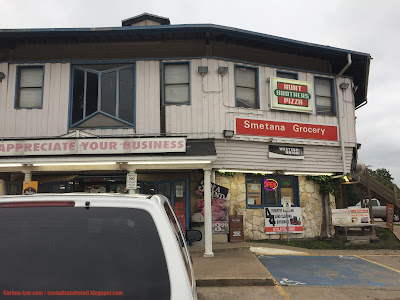 Picture from May 2021. It's hard to capture this building in one shot.

Smetana Grocery is one of those old rural Exxon stores with the store name in a large red rectangle on the building, and originally opened back in 1972. It didn't become an idea for a post until I noticed an ad copy in a 1989 phone book. I didn't scan it (no logos, just text) but it is reproduced below:


Well, I was intrigued. Who knew that some rural gas station was selling a bunch of organic health foods and products that regular groceries at the time wouldn't touch? And this gas station is still in business today at 7700 Highway 21? And it's a 12-sided building with two stories? I had to check it out.

With the relatively recent passing of Brazos Natural Foods (mentioned over at this post which is in need of a re-do one of these days), there's no dedicated store for "natural" and "upscale" foods, but even before the situation last year, those types of stores were dropping off, with Earth Fare and Lucky's Market both closing in high-profile bankruptcies.

Sadly, but expectedly, this is not the case here. The merchandise mix is very much ordinary convenience store fare. The few notable exceptions are some bulk items that I'm not sure were meant to be sold as retail, like frozen Hunt Brothers Pizza, but there's no gourmet items, no produce. It also is no longer an Exxon, transitioning to Citgo between 2012 and 2016. 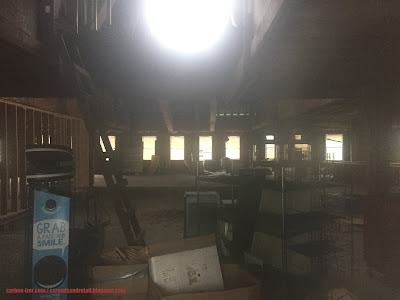 It's dark and dusty up there. The big white glow is sunlight coming in from a window above.

The mysterious upper level only seems to include storage. It doesn't look like living space...or anything finished at all. The current building was built in 1986 and appears to have added the gas station. (The older building pre-dated 1972 and may have a different name originally as it still had a parking area). Oh, and one more thing--it's not great, but here's my attempt at stitching two photos together to make a more panoramic view.
Posted by Pseudo3D at 5:10 PM 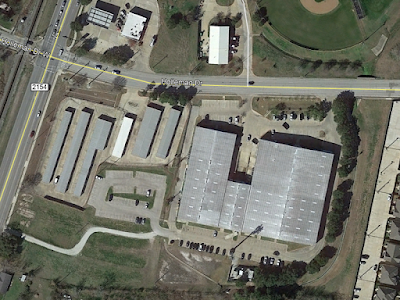 I'm not fond using Google Earth aerials but this is the best way to show the buildings.

Moving down Holleman from the old Valero, which as of this writing is basically a crater, 112-114 Holleman is the subject of today's post, with C.C. Creations at the spot for 30 years, more or less, but it's a bit more complicated than that. This is the way I've best understood it so if there's any inaccuracy, be sure to tell me (my email's in the side column).

The earliest site plan I can find for the building is from 1988 (BCAD says the buildings were built in 1989) shows 112 Holleman as a stand-alone business to be occupied by C.C. Creations (at the time at 205 North Main in Bryan). By 1993, Red Oak Sportswear was built at 114 Holleman, a larger building directly next to 112 Holleman Drive.

Based on what resources I have and what I can put together, including listings from the sales taxpayer database, Red Oak Sportswear was founded as a subsidiary of C.C. Creations, and became a business proper in 1993 following the purchase of C.C. Creations by Clute, Texas-based Brazos Sportswear Inc. in 1992. 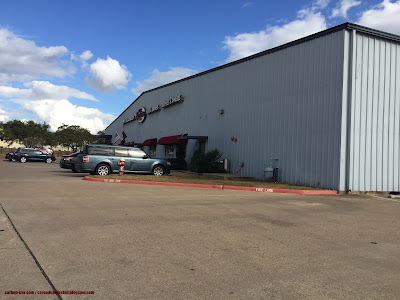 What I do know is that during most of the 1990s, 114 Holleman was occupied by both C.C. Creations and Red Oak Sportswear, leaving 112 Holleman "vacant" although all indications are C.C. Creations still used the building and its name was listed as the address.

In 1997, however, Brazos Sportswear was sold to Sun Sportswear out of Batavia, Ohio. Sun took Brazos' name (despite still based out of Ohio) but it had a much worse financial record, and within two years, filed for bankruptcy. By that time, C.C. Creations and Red Oak were back in local ownership.

After the ownership by Brazos Sportswear ended, C.C. Creations officially moved into 112 Holleman again while Red Oak Sportswear took over the 114 Holleman entirely, possibly preparing for the "divorce" of the two companies. In 2005, Red Oak was sold to Knights Apparel, while around early 2007, C.C. Creations moved out and to a smaller location at Southwest Crossing. 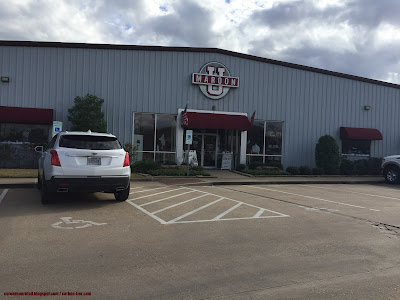 Both warehouses became empty when Knights Apparel shut down Red Oak in early 2008. However, by November 2012, C.C. Creations moved back to their old stomping grounds, this time in Red Oak's old space. Meanwhile, the 112 space was replaced by Maroon U, a new subsidiary of C.C. Creations, offering Aggie branded apparel with higher-priced labels, and between both warehouses, the The Warehouse at C.C. Creations, which functionally replaces outdoor tent sales C.C. Creations used to have.

This is the configuration that currently exists today. I should also mention that C.C. Creations had a trophy business at the strip mall at the northwest corner of Harvey Mitchell Parkway and Southwood which was merged back into the main business.