Former Valero at Holleman and Wellborn 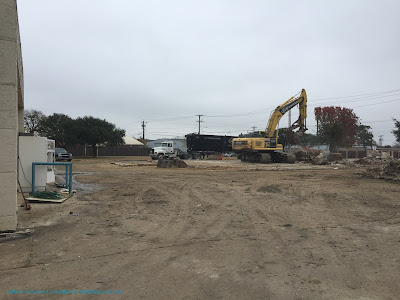 The Valero at Holleman and Wellborn was demolished this month. The original convenience store at the station at 1011 Wellborn, dating back to at least 1993 was Jud's Food Stores out of Brenham. The station was built in 1989 as per BCAD but Jud's Food Stores was established in 1990, so depending on when the station opened, it may or may not have had that name. In fact, by the time the station opened, it was Jud's Food Stores #9. The first four stores were located in Brenham, with store 5 being in Seguin (2999 North Highway 123 Bypass) and 6 at 701 East Pierce Street in Luling. (This indicates that stores one through eight were older rebranded stations).

In any case, 1011 Wellborn was originally branded as an Exxon and remained that way for years. It also had a drive-through car wash and when I was younger it was occasionally used by my folks. I believe this was because there was a deal where you could use for free or very cheaply if you purchased gas, but at some point in the late 1990s this was dropped.

In 2000, the station was expanded with U Wash, which opened at the same address (though technically, the address by BCAD's number was 1001 Wellborn) and same ownership. U Wash was a self-serve car wash with several docks and was accessible only through the Exxon's parking lot. More change would come to the station a few years later, when it became a Valero in the mid-2000s (2006?). This Valero came slightly before the local Diamond Shamrock conversions to my memory, and was the first time I saw such a station.

Sometime around the same time of the Valero conversion, the convenience store became "Cross Roads Corner Store Aggieland" (the signage where Jud's was, on the left side of the door, was whited out). From then on, the station didn't see much activity in the station. The station did add Krispy Krunchy fried chicken inside in 2016 but this wasn't well advertised (not even on the outside of the store). However, U Wash was later closed and torn down within a few years of that without much fanfare, signifying (if subtly) that things were coming to an end.

In any case, I found in December that the Valero had removed the prices from the sign (though it was not covered in any way), with the gas station store emptied of merchandise, though the power was sill connected, given how the Monster and Coca-Cola coolers were still glowing. The drive-through car wash also had not been gutted yet. The whole thing looked as if it might reopen as something else, or at least be weeks away from being torn down.

Not so much—when I got around to it a few days later, the canopy was gone, the sign was gone, and Jud's wasn't much more than a foundation. (The car wash was still intact but gutted).

The rumor mill states that the corner of Holleman and Wellborn will be the home of a new McDonald's restaurant, moving from the corner of Marion Pugh and George Bush as part of the underpass construction. Unfortunately, this almost certainly means that the new restaurant will be a soulless brown building with silver accents rather than an example of the slightly nicer restaurants McDonald's was building/renovating with in the early 2000s, as the current restaurant is.

UPDATE 04-06-2021: Took out the other Jud's Food Stores mention, as it looks like the numbers were wrong, and they reused #7. Maybe if we ever do Brenham-related stuff, it might be worth a mention. Either way, College Station was the largest market Jud's settled in. UPDATE 11-30-2021: McDonald's has been confirmed for the site, at least one half of it.
Posted by Pseudo3D at 11:55 AM