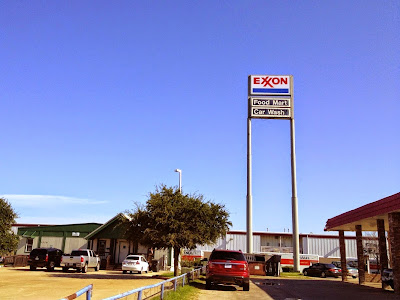 The landmark Exxon sign has stood here for over three decades.

This is the first new post in many months, but it's not a truly new post, it's just an old post "edited for syndication", and was originally part of The Far South Point of Texas Avenue (which is no longer, as the post has been rewritten), one of the last posts, which itself was originally supposed to be a part of "Texas Avenue: The Main Street of the City". Anyway, "Jimmy Jackson's Exxon" opened in 1983 at Miller's Lane (FM 2818 before it finished expanding to the highway) and Texas Avenue, this Exxon has a massive sign that was clearly grandfathered in as College Station would not allow such a majestic structure anymore like that, this Exxon was a full service stop built catty-corner to the Kmart on the edge of town (well, it was the edge back then) with a self-service car wash, garage, and convenience store.

Selling out to "Franky's" in 2001 (aka Frankie's), I actually managed to make contact with Jimmy Jackson's daughter (Mr. Jackson sadly passed away in 2013), but could not locate any photos of the gas station in its heyday. There was a second Jimmy Jackson gas station, which was sold and torn down well before his death, it was the Eckerd (now CVS) at the corner of Villa Maria and Texas Avenue.

In reality, the sign isn't quite so massive as it appears from further 2818 (mostly due to the hills), but something tells me that it was designed to be seen from the bypass when it was built (at least going northbound). As of this writing, I don't seem to have a picture of the actual "Franky's" convenience store, but it seems to have been altered from its original form anyway. I also get the feeling Franky's is kind of sleazy anyway (it was one of the ones pointed out by KBTX as having synthetic cannabis before a variety of laws cracked down on that).