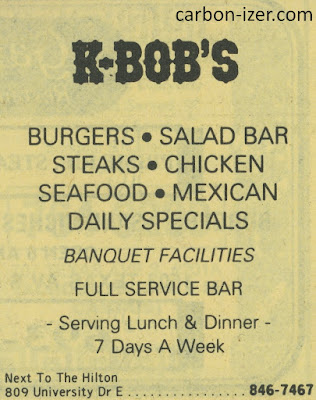 This is an ad from K-Bob's Steakhouse back from 1989. Yes, this restaurant building DID start as a chain.
Paolo's Italian Kitchen, which has been here since September 2014 and August 2022, is officially dead*, and thus I figure it would be a good time to cover the story of 809 University Drive East. 809 University Drive East consists of one restaurant in the front (with a silver roof) and office suites behind it (copper roof), and while I can't get a good picture of Paolo's (it is, of course, sunken into the ground) you can catch a picture of Paolo's from our Abuelo's entry here.

The last time I ate at this restaurant was back sometime around the early/mid-2000s when it was T-Bone Jones. It was a good steakhouse while it lasted and it was a pick of my parents for date night. It closed in 2005 for a few reasons, the first reason was that when University Drive East was rebuilt in the late 1990s (six lanes out to the freeway), the construction required a retaining wall to be built, and as a result the restaurant was almost a full floor below the road level with limited visibility and access. The second reason was that with the early 2000s came a new slew of restaurants in the same corridor, with Cheddar's Casual Cafe, Rockfish Grill, Texas Roadhouse, and later the new location of Wings 'N More taking up residence, all with much better visibility and access. Lastly, and probably not an immediate factor of its decline (but compounded problems), but as the restaurant lost popularity, the dining room looked big and empty. There's a reason why restaurants, especially chain ones, try to separate out dining areas...

While 809 University Drive consists of a number of smaller office suites, the building in the front (and the only one with a silver-colored roof as opposed to copper) has been restaurants (suite 100A, though not always used). The most recent one is Paolo's Italian Kitchen, as previously mentioned. Previous tenants of the restaurant portion) included Rooster's Country Dinner House (2012-2013, failed in less than six months), Sodolak's Beefmasters (2010-2012, see our previous post that does briefly mention their attempt here), T-Bone Jones (1994-2005), Armando's Border Grill (1992-1993), Santa Fe Steakhouse (1990-1992), and K-Bob's Steakhouse (1986-1990).

You'll notice there is a gap after T-Bone Jones, it did sit empty for a few years.

I'm not going to list the tenants in the office complex, it's boring and that's probably not what you're here for. Still, it's worth mentioning for the number of other tenants that have used the 809 University Drive East address over the years.

* This made a lot more sense when I wrote this back in early September.
Posted by Pseudo3D at 6:21 PM 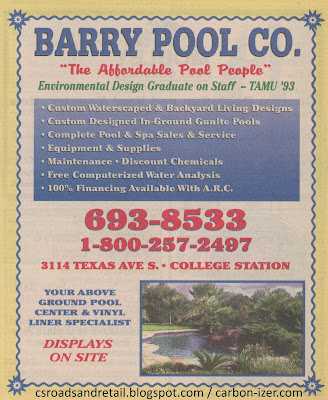 Advertisement from 1999 phone book
As the weather gets chilly, I think of trips I've taken in the past for Christmas and Thanksgiving, which usually involved going down south from Texas Avenue (starting at Wal-Mart) and jumping down toward Highway 6, then off to 105. A good part of Carbon-izer is built around those memories. I've covered Veronica's here and there's one more defunct gas station that I'm still trying to collect information on, alluded to in that post over a year ago but I have yet to get around to it.

But first, Barry Pool Company. The address, 3114 Texas Avenue South, has been operational since 1986. They sold out around 2008 to what is now known as Brazos Valley Pool & Spas, but one of what made Barry's memorable was its sign, featuring a backlit slightly stylized drawing of a woman in a bikini (you can barely see it here but you can't really see it all that well). Nothing obscene but it was still interesting and memorable enough, especially back in the time when I was rarely going down this stretch of road with my family. After all, what was beyond Wal-Mart? Not much. No grocery stores (not until Kroger opening in 2000), very few gas stations, and beyond Rock Prairie Road, no hotels or restaurants. As you can see on Carbon-izer that's not the case anymore and hasn't been for a while.
Posted by Pseudo3D at 1:00 AM 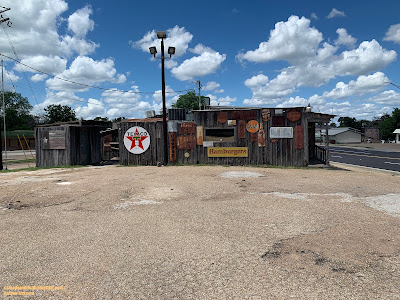 Chicken Oil Company is a ramshackle-looking business, this is the back view from the parking lot. The front view from College Avenue is harder to get. (Picture from author, 8/22).

Once again, we're on College Avenue, which unlike FM 1179 doesn't have a corresponding page where everything is covered so neatly, covering Chicken Oil Company, which is closed, at least temporarily, following a fire in April 2022. I could've done what Columbia Closings does, put together some pictures of the business, give a few words if he remembers it or not (and if the former, with fondness or not), but I wanted to try to give an overview of the property as I usually do. 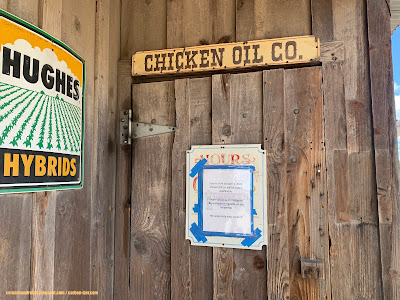 The same sign, affixed with blue painters tape, was in multiple other places outside the restaurant. (Picture from author, 8/22).

While I've eaten Chicken Oil Company a few times, what can I say, good hamburgers and fries, the restaurant space started out in an existing gas station in the late 1970s and evolved to what it is today, dropping gas along the way and creating a cobbled-together building similar to Dixie Chicken, which had the same ownership. 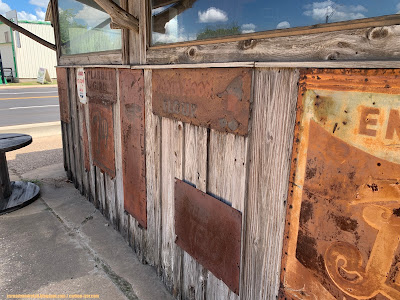 The restaurant is decorated with old advertising signs, though these have not been well-maintained and have rusted away. (Picture from author, 8/22).

While the gas station dates back to an indeterminate time, a separate "party room" was part of another restaurant, the Triangle Drive-In. This link currently has a picture of the Triangle as it appeared in 1948 (if the link dies, search Project HOLD or its successors for "Triangle Drive-In; photos (Aug. 1948)" without quotes. Friend of the site "Bryan-College Station, Texas: Now and Then" explains some of the history here (archived link--Facebook not required).

From what it looks like, when the Triangle Drive-In expanded in 1957 to the Charcoal Room, the awnings to that building disappeared and another structure was built to the south. The 1940s building remained during all this time (though I'm not sure what it was later used as). By 1971, the original Triangle building was gone, as was the 1957 building. (Later, the space where the 1957 building was became the home of Tom's BBQ, and is now J. Cody's). I'm not sure what the "Charcoal Room" restaurant was used for in the interim. 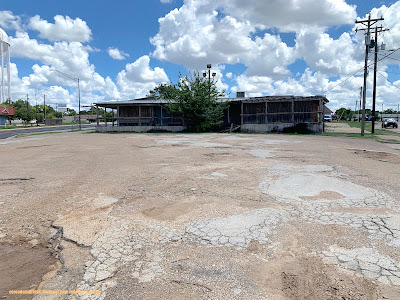 Ironically, the "Charcoal Room" was not the one that burned down. I had to bump up the brightness a bit on this one. (Picture from author, 8/22).

As you might have noticed from the photo above, Chicken Oil has been closed since an afternoon fire on April 3rd, 2022. The insides of the building were photographed a few days after the fire (YouTube link). You can see that the kitchen areas were trashed but the dining room, while suffering extensive smoke damage, looks salvageable. Despite that, five months later, the restaurant has remained shuttered with almost no work done, yet the owners have vowed to reopen.
Posted by Pseudo3D at 12:22 PM 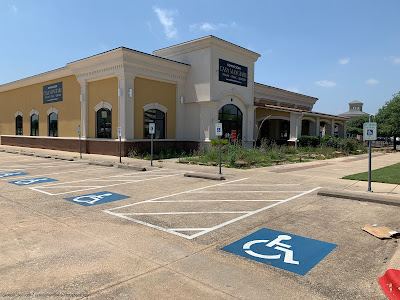 This restaurant is out of service, but hopefully not for long.
Ah, it's great to be back! I've been updating Carbon-izer's city directory for the city chock full of things that will probably never see a full post, and I've been updating the Facebook page weekly with retreads and occasional new updates of posts but it's been a while since we had an all-new page here.

As outlined last November, only businesses that have turnover are covered, making it a bit more like Columbia Closings in that regard.

"Abuelo's Mexican Food Embassy" opened its College Station location at 840 University Drive East in May 2006, and sometime in the early 2010s (2013-2016) became just "Abuelo's Mexican Restaurant". It shut down in April 2020 during the COVID-19 pandemic, with two others closed around this time, a location in Plano (3701 Dallas Parkway, open since 2001) and one that had been open since 2003 at Barton Creek Square (as an outlot, not in the actual mall itself). Do check out that link, it's one of the things I've been working on recently...and because I live in the Austin area now (it's true...) you'll probably see more along those lines.

Anyway, I can't say much about Abuelo's. I never did go there and the restaurant chain itself is alive and well, just not in the Austin or College Station areas anymore. I'm not sure about the Austin or Plano locations, but on University Drive East, the space is already signed for a new Italian restaurant, Casa Mangiare. Otherwise, enjoy the pictures! All of them were taken in May 2022 by the author. 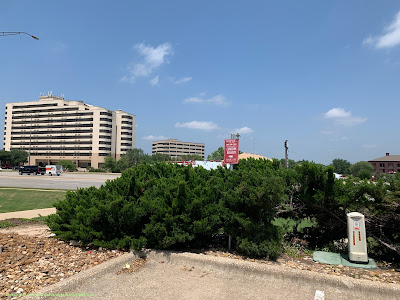 A bird flexes its wings on a sign for the curbside service. I'm not sure if these were put up shortly before its closure or pre-existed. 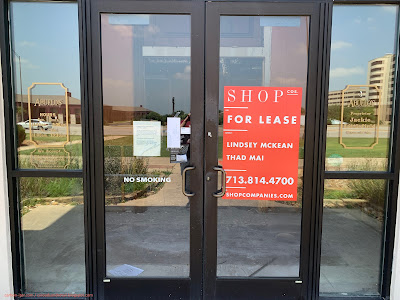 Despite signage up for the next restaurant, older "For Lease" and rent lockout signs still exist on the doors. 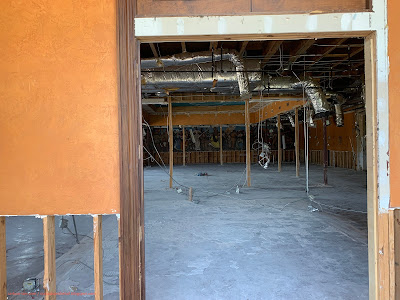 Inside, Abuelo's has been gutted, but a mural on the back still exists for now.
Posted by Pseudo3D at 1:00 AM