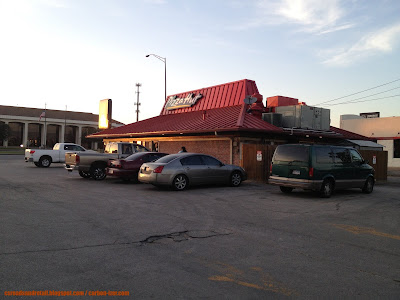 In 2014, the sun was starting to set on this Pizza Hut, figuratively and literally. (Picture by author)
With the recent news that Yum! Brands is closing some 500 sit-down Pizza Hut locations, that is, the ones that haven't already been closed down, it's high time for a look back at the sit-down Pizza Hut that College Station once had at 102 University Drive East (there was another short-lived Pizza Hut on University Drive proper in Northgate, and I promise I'll cover it soon enough). From newspaper archives and other sources, the Pizza Hut opened in 1974 but closed around July/August 2017. It did retain its iconic 1980s logo for a while after Pizza Hut started rolling it in more stores (probably as late as 2007), and today is home to additional parking for Fuego Tortilla Grill. The roof was redone in brown around this time.