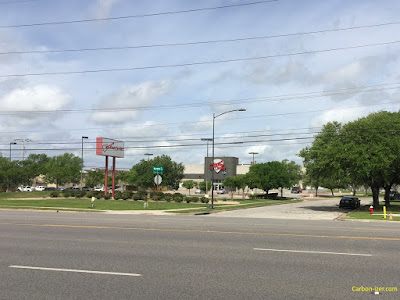 Picture from April 2019 by author.

The distinctive shape of this building is recognizable as a former Circuit City, which was built in 1995. I maybe went into Circuit City once or twice in this location, but I do remember it as a dimly-lit place with computers on display (typical of Circuit City, and that was their gimmick, for the darker lighting to better show off computers and televisions), and nothing like Best Buy, which was brighter and better organized.

In January 2007, Circuit City moved to a new location at University Drive and Highway 6 (about where Half-Price Books is today) and closed down their location, only for the new location to close down a few years later. ("Bryan-College Station sees boom in businesses" from The Eagle). In early August 2012, Guitar Center opened a store at the location but it retains its original architecture.