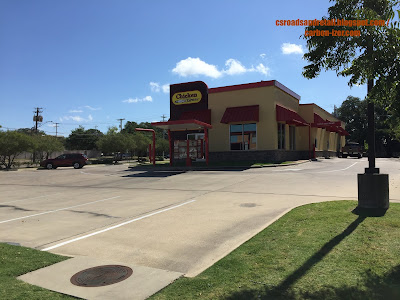 The Chicken Express here didn't look much different from the Burger King it replaced (you can see that picture on Yelp). This picture is from August 2019 by the author.
The Chicken Express at the corner of South Texas Avenue and East 29th Street is rather pedestrian, and probably would not have been covered had it not had a previous tenant that had fond memories for me. As a kid living and growing up in College Station (this was originally named "College Station Roads & Retail", after all), going to downtown Bryan was a fairly rare occurrence. Of these trips, most of them were to the downtown Greyhound bus station where relatives would often come down by bus (Waco or Houston), including cousins and my grandfather. This is why Chicken Express is covered, is because of that bus station (located at 405 East 29th Street).

Granted, it was dirty and run-down especially by the late 1990s and early 2000s, and I've been told the building started out as a UtoteM (and that may have had Amoco gas, from what I've heard) and became a bus station by 1980. I don't think it was remodeled much at all between tenants, and it had a drop ceiling, florescent lighting, really worn tiles, possibly dated from 1960s to 1970s, some rather drab and cheap-looking chairs, and the like. There were a few vending machines, including some candy dispensers and (if I remember right) even a coffee vending machine. While it was a miserable place that seemed to be falling apart, it had charm (though I'm sure I'm the only one that thinks that) as a wonderfully grungy place that was a gritty time capsule of the 1980s.

After it was torn down in the late 2000s, the replacement of the store was a Burger King with the address of 401 South Texas Avenue (ironically, despite the new Texas Avenue address, the site was rebuilt to not allow access to Texas Avenue), part of a proposed bunch of new stores as part of a new franchisee. The new Burger King opened around April 2009 and closed in January 2011 (but not reopening). Reason was probably because B-CS just isn't a Burger King town (the one at Texas and Deacon seems to get pretty low volume). It reopened as a Chicken Express some months later (2012 I believe) which did little to the restaurant except give it red trim instead of blue (and serve an entirely different menu under new ownership and a new name, of course).

The redevelopment into Chicken Express also demolished a building (built as a house, though it likely was no longer serving as residential by the time it was torn down) at the corner of 29th and South Houston Avenue. This may be researched in a further update.