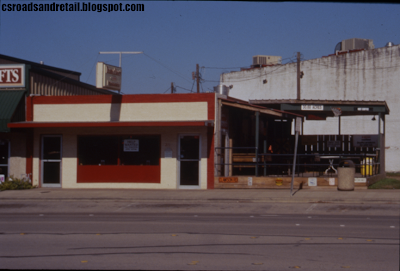 Before Zapatos Cantina, this was DoubleDave's PizzaWorks. (Photo from Project HOLD)
Once again, we continue the walk down University Drive, and next to the former Aggieland Flowers & Gifts was, for years, Zapatos Cantina at 211 University. Like Bill's next to it, this was once "Don's Barber Shop" in the early 1970s (Building as marked as "1960s", assumed build date). After it served as DoubleDave's PizzaWorks by the 1990s (not the original location--the original-original is now Good Bull BBQ on George Bush Drive), it became Zapatos Cantina, which was a Northgate hangout known for years known for "trash can lid nachos". There's a few other reviews of the old establishment, and even that review predates 2009 (when smoking was banned in bars).

At some point after Bill's at 215 University closed (no 213 University, just an open-air area between the two buildings), Zapatos expanded to that location, until spring 2013, when Zapatos closed. This was almost certainly because of Chimy's Cerveceria opening and providing more space and likely better overall for a similar menu and theme.

Most of the building's recently history has been empty, with only serving briefly (around the middle of the 2010s) as a leasing office for Aspen Heights off of Holleman Drive South, and in fall 2018 opened as The Draconian Lounge.

UPDATE 01-03-21: As part of integrations with the University Drive "City Directory" page (still in its original form as this writing), this building was "Pyramid Audio" in 1980.
Posted by Pseudo3D at 1:00 AM

The Failure of the Micro District 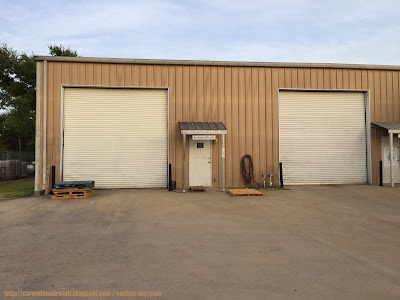 Unlike the other big roads covered on this site, North Dowling Road (or Dowling Road if modern city signs are anything to go by) doesn't have a lot going for it. The two other items on North Dowling Road worth talking about, Former Country Grocery and Wickes Lumber were both covered years ago, and despite some newer development (an RV park, a mini-storage, and a few apartment buildings), North Dowling is relatively empty.

The exception, was, of course, the Aggieland Micro District, an informal name for 11405 North Dowling Road, a collection of warehouses dating back to 1994. The oldest building there is what is now home to Go Dog Customs, but in the early 2010s (and possibly original, as it was there in the late 1990s) was Quality Enterprises. This had the address of 11378 Hickory Road, and was accessed from Hickory Road.

The 11405 North Dowling Road buildings came in-line a few years later, with Unit A and Unit B in one building. Unit B (until fairly recently) was a warehouse for Texas Trading Post, which actually hung out in the links section as part of this website for years because they linked back here (they eventually took out the link, and when I discovered that, I removed theirs). This incarnation of 11405 North Dowling Road did add a connection to North Dowling Road but still had dirt/gravel roads. By 2006, all but the two northern buildings were built, and by 2010, when New Republic Brewing Co. first moved into Unit H, the driveways were paved (with asphalt, and a few years later it became concrete).

New Republic would move to C (and its adjacent space) a few years later, and by late 2015 it had been built up to a small but thriving brewery.

While the Aggieland Micro District was only a modest success, with food trucks and a band playing at NRBC on the liveliest of days, NRBC's attempts to further coordinate with Rio Brazos and Perrine Winery would fail.

The downfall of NRBC would begin would shortly after with the departure of brewmaster and co-founder Dean Brundage leaving for a new venture. An ugly combination of events including the COVID-19 disruption, issues with the landlord, and the departure of co-founder John Januskey would force NRBC to cease production.

When I visited in June 2020 for what I had planned to be my final visit, the brewery was in poor shape. Half of the space had been sealed off (the other half included a makeshift office and lab, and storage space for empty cans and other products). The other half was cleared of tanks, boilers, and canning equipment. Even the loft, where hops and yeast were stored, was being dismantled. 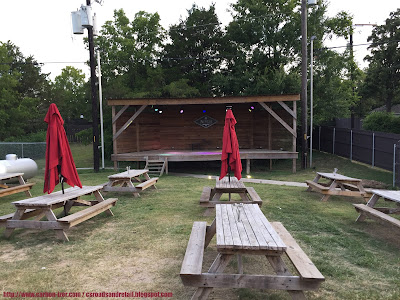 NRBC built up a full outdoor area complete with a stage.
With NRBC fading out and Rio Brazos said to have shut down its taproom, the Micro District appears to be dead with no chance of revival. It's disappointing that the Micro District would only be a footnote, if that, for the history of College Station-Bryan, and return to its original form, a collection of unremarkable warehouses. I suppose it's better that it has some physical memory, as even bigger places have faded away entirely, such as East Orange, Louisiana. Even physical places, of course, hide the time when they were really something. Neither the front office at The Flats on 12 nor the closed-down Tobacco & More suggest they were anything fancy at one time.

The other "Micro District" tenants include Rio Brazos Distillery, a small whiskey/bourbon bottler (largely just one employee, located at Unit H, NRBC's old location), Perrine Winery (a few doors down, opened 2016 after being at Post Oak Village for a few years). The only other retail tenant I can think of there includes Brazos Valley Trash Valet and Recycling at J-1 (opened 2009 after that warehouse section was built). (At Unit F, a business called Absolute Wheel Technologies was operating, but it has since moved out to Highway 30). 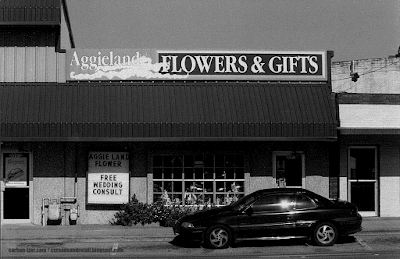 Original from Project HOLD, c. 1994
Aggieland Flowers & Gifts (at one time, at least according to directories, "Aggieland Flowers & Gift Shoppe") has been in the 1965-built 209 University from before 1980 to around 2007, when it moved to the bypass as Aggieland Flowers & Chocolates. After a few years of being empty, it was replaced with The Ranch, which replaced the roof with an upper level area. What I'm not sure about is as of 2012, was the upper level of The Ranch part of The Ranch or was it Schotzi's SkyBarr/Sky Bar as described in the previous post 4.0 & Gone? Furthermore, there's evidence that The Ranch was filed in New Development files as "Aquarium Bar", but it never opened as such.

The conversion to The Ranch came about the time when on-street parking was removed in favor of a wider sidewalk. Sometime by 2015, The Ranch closed and became The 12 Rooftop Bar & Lounge.

UPDATE 01-03-21: As part of integrations with the University Drive "City Directory" page (still in its original form as this writing), Aggieland Flowers has been at this site since at least 1972.
Posted by Pseudo3D at 3:47 PM 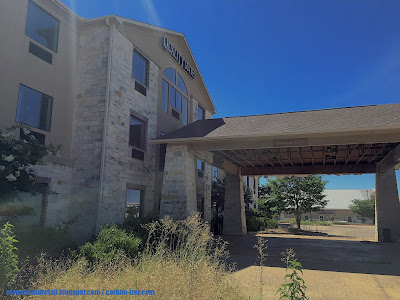 The direct sun hurt this photo, but I think it gets the point across.

I first stumbled upon this hotel (at 3610 Highway 6 South) in fall 2019 to find it closed despite being a fairly modern-looking hotel (it was built in 2005) and on the highway. All the signage was up and graffiti had not yet hit the building, but the high weeds and tattered entryway said otherwise, nor any sign that the hotel would be opening soon (it was removed from the Choice Hotels website). Apparently, the hotel closed by early 2018 (mentioned on Yelp's "Tips" which seem to have disappeared in a recent redesign) due to a flooding problem and it never reopened. At this rate I can't see it reopening as a Quality Suites any time soon, and even without a virus decimating tourist trades, there's a lot of hotel competition that didn't exist when Quality Suites first went up. Despite being on the freeway as well, its access is a bit difficult, either requiring the southbound exit to Texas and staying on the frontage road, or working around Longmire and going back to Ponderosa. There's a good chance that it was planned before the new Rock Prairie exit was made, not only did the old Rock Prairie exit actually allow access to the hotel very easily (even southbound) in 2005, it did not visually obscure it. 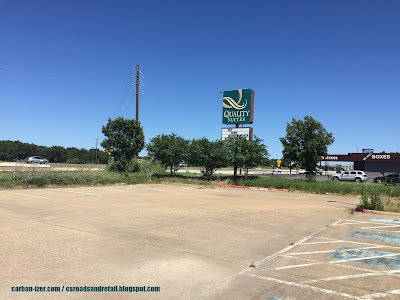 According to one of the old Choice Hotel locators I have (from 2007), the hotel has 81 rooms, a swimming pool, exercise room, meeting room, and a few other modest features (like guest laundry).

Even if the hotel industry was better (overbuilding had gotten to be a problem), Quality Suites shows no signs of reopening anytime soon. The card reader on the south entrance has been ripped out, exterior maintenance is slipping, rooms have been dismantled (mattresses leaning up, etc.), and the lobby is trashed. It would not take much to reopen it under a different name, but it requires some work that the current owners have not put in yet. Personally, I'm surprised the high weeds have not gotten the pressure from city code yet. 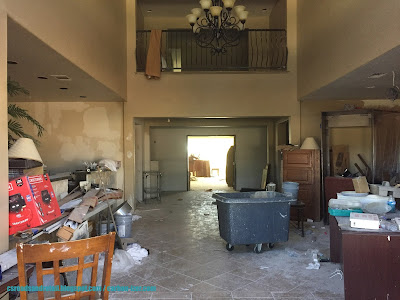 In terms of placement, this is the very first address (apart from Veronica's Country Corner, an outlier in every sense of the word) that focuses on a Highway 6 address that isn't on the Earl Rudder portion, and the first hotel covered in a while (not since La Quinta). 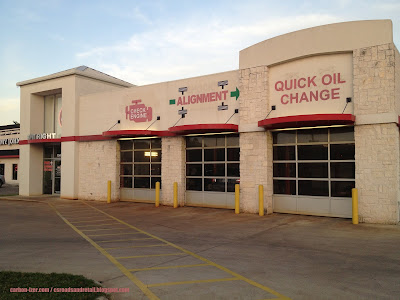 Brake Check, pictured here in 2014 (by author).
It's Thursday, and there's no more posts in the backlog to feature. Time to make a new post, luckily there's source material to whip something up. In this case, it's Brake Check on University Drive East (only Brake Check in town as of this writing). Originally, when it opened in 2007, the text above was different ("Alignment" was originally "Shocks & Struts", for instance). Before Brake Check opened, it was a Sonic Drive-In, one of the first in town (the other was at 914 South Texas Avenue in Bryan, which remained open and was completely rebuilt in the mid-2000s). It was open even according to the 1980 phone book, likely opened in the 1970s. This location closed around 2004 (possibly 2003) and stood vacant for a few years before it was torn down. (There was a gap of a few years before a new Sonic at Cooner and Texas opened). 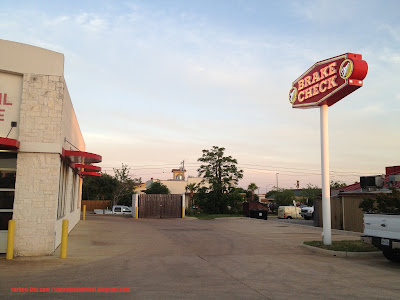 The new Brake Check did not have access to Poplar as Sonic once did, as Sonic was once part of a 1970s-era "restaurant row" with Egg Roll House (now Jimmy John's) and the Pizza Hut.