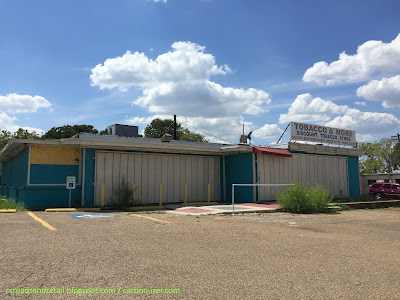 This closed-up convenience store is all that remains of what was one of the nicer restaurants in town.

In February 1948, H.G. Burgh and his wife, a couple that had recently moved from Seattle, opened a drive-in restaurant called "The Ice Burgh" at 3204 South College Avenue, serving the usual drive-in fare of hamburgers, sandwiches, chicken, and ice cream. By 1952, the restaurant was known as (and possibly under the same ownership), as "The Texan Drive-In", which a 1952 ad claimed it was "already famous for delicious foods". However, due to poor records, it's not known if the Ice Burgh became the Texan, or the Ice Burgh closed and was replaced with in the Texan.

1971 Phone Book, an image oft "borrowed": this is what prompted me to use watermarks.
In any case, by 1967 the restaurant was somewhat run-down, and sold to Robert Tapley and his wife Diana. The Tapleys slowly reworked the menu into a gourmet experience, renaming the Texan Drive-In into the Texan Restaurant and we have the 1971 ad above. Known for its chef-prepared food and delicious salads, the restaurant entertained and fed a loyal clientele for years (One of the comments I received on the Texan on this website was an A&M grad student who worked tables part-time in 1980 and saw Gene Hackman at a table, but he probably wasn't a regular). As chains infiltrated the markets, and changes were made to remain competitive, such as cutting prices and making the salads in the kitchen instead of tableside. The final blow was Christopher's World Grille (opened 1999), which although wasn't trying to kill the Texan, ended up doing in the restaurant. By that time, they were open only 3 days a week, and Diana, now in her early 70s, saw no other choice but to close the restaurant permanently in early 2000.

By 2003, it reopened as Tobacco & More, a discount cigarette/convenience store, but it closed down by late 2016 before the construction of South College Avenue, which ended up closing off the main driveway. The only access into the business is through Fairway Drive.