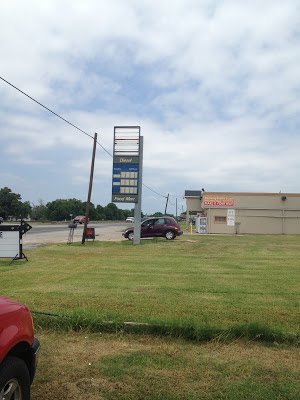 My photo. I wish I had taken it when was still, you know, a real sign.

Gas station nostalgia isn't an obscure hobby, but there seems to be less for the recent nostalgia as well. Case in point: the old "gray and solid colors" Chevron stations from the 1980s and 1990s. I first really noticed the difference a few years ago (there was an abandoned Chevron in Conroe, Texas, in 2011 that had the striking difference, and a Chevron near Jersey Village survived with the original color scheme before the tower finally came down this year).

This "gas nostalgia" often goes hand in hand with the growing endangerment of rural gas stations that are often small and out of date but have excellent barbecue, and the former Chevron in Wellborn was an example of this (along with Rolling Ridge Grocery). Junek's Grocery (Junek being pronounced unfortunately similarly to "eunuch") was the name but around 2007, the Chevron here lots its pumps and branding around 2007, about the same time when the new design was starting to roll out chain-wide (probably closer to 2010 was when it saturated) and not when a more modern Chevron was built nearby.

Because of how far away Wellborn was, I never had the barbecue here. About the time the gas station stopped selling gas, Junek's Barbecue moved out to a nearby lot, had a change of ownership, and closed (becoming a revolving door of restaurants and eateries, none of which have survived for more than a few years: Outlaw Jack's Brew N Chew, Country Cafe, Chubby's Meat Wagon, and now a Cajun restaurant. Meanwhile, the former Chevron station renovated (the facade, at least) and became Wellborn Grocery. You can also see what the facade looked like as "Junek's Grocery" right here or what it looks like as "Wellborn Grocery" right here.

The Chevron here was always a fun sight to see, as I never went this way except on rare occasions (such as going on a long trip). Even in the early to mid 2000s, there wasn't much to see past the Exxon at Rock Prairie. The area between Graham Road and Rock Prairie only had a few (brand new) buildings, Highway 40 didn't exist yet, and Wellborn was entirely two-way only, save for a left hand turn lane near Rock Prairie Road and the remains of North Graham Road. Then, after you'd give up on whether you'd see anything until Navasota, you came to Wellborn.