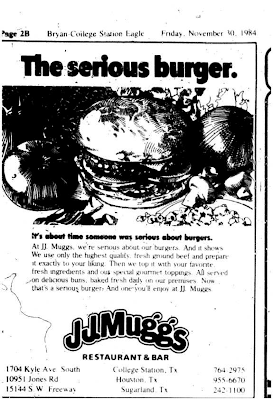 From The Eagle, 1985.
The advertisement above is for J.J. Muggs, one of the earliest known restaurants along the Harvey Road stretch, and opening at 1704 Kyle Avenue South (later known as George Bush Drive East). The restaurant, which opened around 1984, did not last all that long (the restaurant, a division of Pillsbury's S&A Restaurants, closed in 1986, but the restaurant here may have lasted until 1987) and by 1988 became another restaurant known as Rita's Eaterie and Cantina, which had a few Houston locations built around the same time. 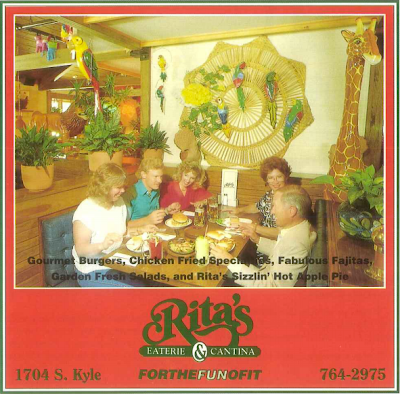 In 1992, after Rita's had been closed for some time, it became Garcia's, a local Mexican restaurant that ended up becoming the most well-known of the restaurants (besides Fuddruckers) that previously operated in this location.

The ad above came from a mid-1990s copy of defunct local magazine "etc." Garcia's briefly closed in January 2002 following the explosion of new restaurants in the area, with Rudy's Barbecue, Johnny Carino's, and the restaurants in the new University Drive East corridor among them. It did reopen within a few weeks but it still was not enough to save it, and ended up closing about a little more than a year later. I seem to remember it having decent food, but also had this cow head hanging from the ceiling (one that appeared to be made from papier-mâché, not a real one, obviously) that as the A/C kept going, revealed a blood red neck. That was my most vivid memory of it (I only went once). 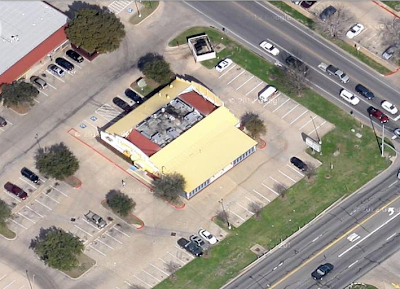 Fuddruckers moved in the location in 2003 and it's been Fuddruckers since. Fuddruckers (as a chain) was bought by Luby's in 2010, but the venerable cafeteria chain soon began having financial troubles. This finally came to a head when the restaurant closed "temporarily" due to the ongoing COVID-19 crisis and the continuing closures of its now-struggling parent company, Luby's. In mid-July 2020 the closure was made permanent.

In August 2021, the space became Joe's Italian Restaurant, becoming the fifth generation restaurant in the spot.