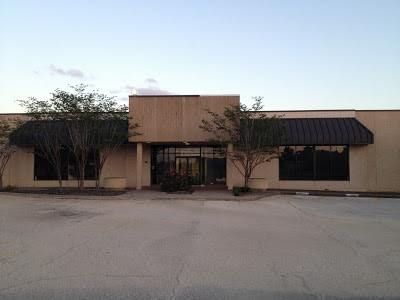 Built as Lester's in 1973 and lasting at least until 1985, this building has sporadically served as office tenants. When I took this picture in 2013, it had been vacant for the last several years (Google searching indicated a "Lonestar Systems Inc."), but within a year or two had been reoccupied by Greenwood Hall Education Solutions, an office for a California-based education technology company. However, the company abruptly folded in December 2017 closing its Bryan office.

There's also a painted train Locomotives on Parade still on the premises. It's visible from Google Street View but it doesn't appear to be anything photographed and based on the wheels looks like a repainted version of the Foo Foo Choo Choo, and as of 2013, the tiles outside still read "THE SMART SHOP", referring to "Lester's Smart Shop" in old articles and ads.

An anonymous comment says that Houston-based Craig's took over the store shortly after Lester's demise and operated it into the 1990s. While I haven't researched these dates, I did find that in October 1986, Craig's opened off of Westheimer in a store formerly occupied by the Smart Shop, but this was actually unrelated to Lester's. By fall 1993, Craig's had pulled out of Bryan, having shed 10 of its 23 stores between 1988 and 1993. According to a 1989 phone book, Craig's did have a store here, meaning it was one of the 10 closed. 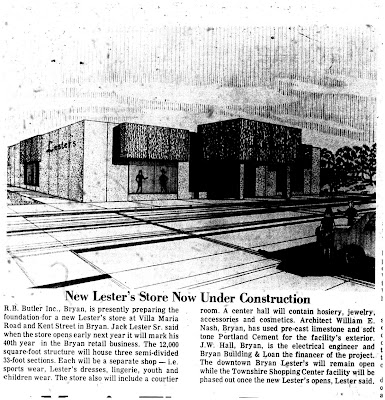