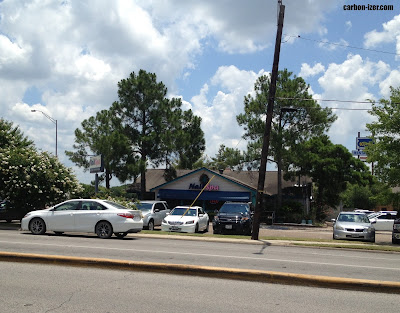 The former restaurant today. Notice the cedar trees, and the Kettle sign. The large "Manor House" sign was above that.

Today, 2500 Texas Avenue South is only a nail salon, but an aerial shows that this building predated the entire shopping center across the street as well as many other buildings along that stretch. It opened in 1977 as Pelican's Wharf, an upscale-leaning steak-and-seafood eatery with restaurants in other Texas cities (the last location ,in Victoria, closed in 2010) not unlike a nicer chain restaurant (but still cheap enough so that college students could afford to eat there). Another detail I picked up from TexAgs, was that although it was waitservice, there was no set waiter/waitress assigned to a table and they shared their tips. 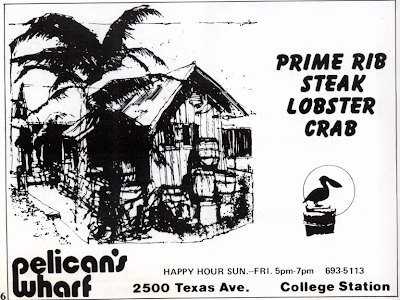 Pasghetti's was the second restaurant in the space, though it's not clear when Pelican's Wharf closed and Pasghetti's opened (possibly as early as 1990), which could build a sauce-and-pasta bowl presumably with a drink and a breadstick) for around $4.95. Refills were a dollar. (For comparison, at the time, one of my favorite places to eat in 2012, the
Posted by Pseudo3D at 7:00 AM