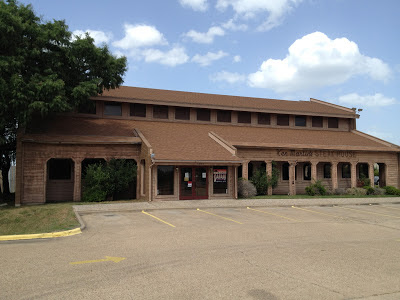 Apart from being in generally poor shape, notice that the STEAK HOUSE was removed first. Picture by author, 2013.

Although Ken Martin's Steakhouse didn't start here at 3231 East 29th Street (it was originally located at 1803 S. Texas Avenue, an auto dealership now, Ken Martin's didn't relocate here until...early 1990s?), at its peak, the Ken Martin restaurant empire included Fort Shiloh, Ken Martin's Chicken Fried Steak (a spin-off located in Post Oak Mall), three or four Pepe's (one where Gumby's was is now, the mall, the existing one in Bryan, and apparently one in Austin), and of course, Ken Martin's Steakhouse. The building here appears to be two levels, and from what I've read, it was a high ceiling for the most part, though an upper level office area did exist.

The original restaurant here in the building (built 1981) and lasting through the 1980s (1983, 1989) was a restaurant called Pacific Coast Highway. It was a fine dining restaurant (beef, seafood, mixed drinks), though the exterior was probably changed to wood after Ken Martin's moved here. Sometime around 2005 (correct me if I'm wrong, here), Ken Martin's rebranded to "Ken Martin's Safari Grille", which updated and expanded the menu (though, despite the new theme, did not add exotic meats to the menu).

The menu for the Safari Grill is below. 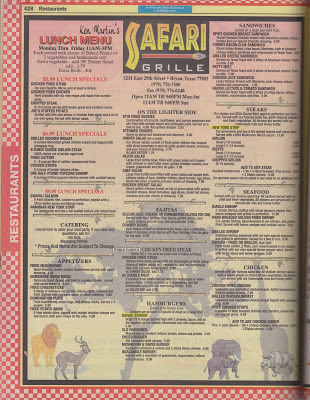 In December 2011, after about four decades of serving chicken fried steaks, Ken and his wife retired from the restaurant business and shuttered Ken Martin's forever.