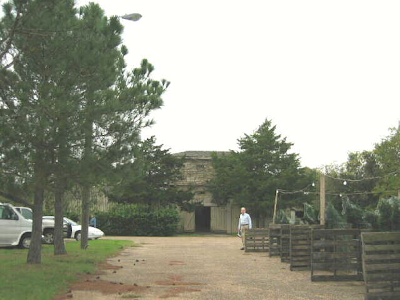 It would be fair to say that the contrived "fort in the wilderness" theme was played well. (See below for source)
2528 S. Texas Avenue

Some years ago, when this blog was younger, I had an idea to compile several different "dead restaurants" into what I called "Tales of Defunct Restaurants". Most of these were eventually split up, with the name kept alive through old URLs on the site. When I broke up Tales of Defunct Restaurants I, I mentioned that I would add a real post on Fort Shiloh, and this was the result.

Until around 2005, the overgrown sign of this restaurant (Fort Shiloh Steakhouse, though some phone books listed it as the Fort Shiloh Grille) could be seen as well as some wooden teepees, with a (much older) building in the back. I don't know the exact history of the restaurant, but from this link, which shows the demolished restaurant, it says that it was opened as an agricultural co-op (Shiloh Club) in what was Shiloh, a (very small) community established in the late 1800s. I don't know when the building was built, but it was an era when the land was farmland (whether it was a considered a part of Shiloh or College Station, I don't know). Before opening as a restaurant in 1976, it had most recently been a dance hall (see link above). If I got my facts straight, the restaurant was owned by Ken Martin Restaurant Group (owning numerous restaurants) and shut down in and around 1996 (per the Eagle article). If I remember right, one of the people involved in the creation was a guy who works in Sysco now (I can't remember his name, I think he was the manager) and served with the restaurant for years (as a sidenote, the guy who worked at Ken Martin's Safari Grill in Bryan was a long-runner as well, with 38 years of experience), but had to quit because the restaurant was apparently too successful and put a strain on his family. From the comments and confirmed, the name of the manager was Joe Ruiz, but searching his name with Sysco turns up no results (guess he hasn't set up a LinkedIn account).

The above picture is from Project HOLD, which have other photos in and around Fort Shiloh, though regrettably none of the teepees or the sign.

From what everything I've heard, it was a rather nice place in its heyday. Here's a comment from the original TODR thread:


Back in high school, I washed dishes at the Fort Shiloh Steakhouse. At the time, it was one of the more fancy local restaurants (filet mignon, anyone?). Sorry that a local landmark closes and is replaced by a dozen chain restaurants from Dallas/Houston.

Additionally, soon after I originally posted this post in 2013, on November 4th I found a 1980s phone book ad that further backs up it being Steakhouse. Note that despite the fancy surroundings, it was a dry establishment even though the county was wet. 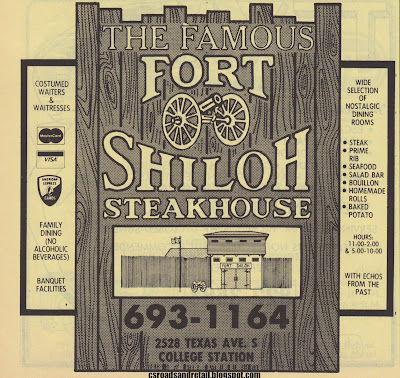 updated june 2017 with new link and slight rewrite
Posted by Pseudo3D at 12:01 AM