The Rise at Northgate 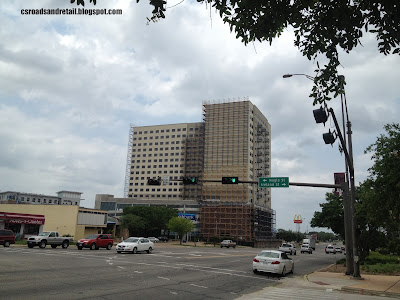 Not there yet...this view may be impossible in a few years when the apartments replacing BB&T get built.
I can still remember sitting on the "porch" of the A+ Tutoring and Fat Burger building (profiled here in this post, which is undergoing changes, but that's okay), looking out at the abandoned building that once held a BBVA Compass Bank (formerly Guaranty Bank until they were bought out) and United Realty. United Realty is now on Graham, and BBVA Compass moved out as well. I don't know when or where they took off too, but I'm pretty sure that BBVA Compass disappeared in 2010 or so.

They were to be torn down for a huge building known as 717 University. This was spring 2012. At first, I couldn't really comprehend a building being there. After all, the Plaza was coming down, and the Plaza occupied a much bigger footprint. I wondered if they would close off Church Avenue for additional space. Turns out they didn't. When they filed something in regards to the airport ordinance, I knew it could be good.

Initially, there was talk of a gourmet grocer (Whole Foods was the rumored choice, and supposedly they even signed a letter of intent), but that eventually fell through as the building was renamed The Rise at Northgate and ultimately CVS/pharmacy would take the place of the lower level tenant, which was just as well. 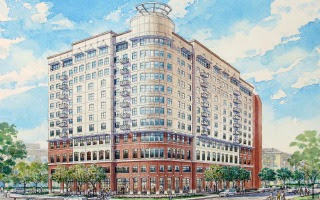 Early concept. It looks substantially different in real life. (snagged from local news site)
Over the fall semester, I watched from the Evans Library them build the large structure, adding a new floor every week or so before it was visible on the skyline.

Anyway, the bank was home Community Savings & Loan Association which surprisingly lasted from the 1970s until 1989. Later, it became Guaranty Bank and United Realty (sharing the bank), the former becoming BBVA Compass and moving out. By 2011, it was boarded up and vacant.

I know I had once parked my bike in the lot in the overgrown grass there, but didn't get any good ground pictures at the time. 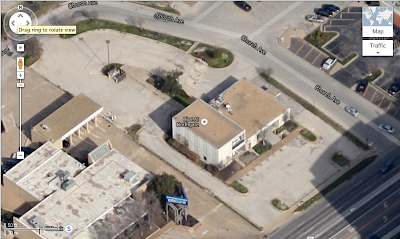 Not too long before, this is what was there.
I don't live in the Rise, but a friend and I checked out the CVS and explored around. It's smaller than a real CVS...there's a selection of food that's generally better than a convenience store, and of course a full HBA (Health & Beauty Aids) department, something convenience stores don't have. The best thing, at least to Rise residents, is a little hallway in the back that links the elevator to the complex (and the parking garage) with the CVS, so in theory, you could make a midnight run for snacks...or at least, it would be midnight, if they didn't close at 12 (that might change in the future).

It's a bit of a bummer that they don't carry any fresh fruits or vegetables, as that would round out the neighborhood nicely. After all, just literally outside used to be the old Albertsons which did have not only a pharmacy since the early 1970s but all manners of produce as well. 24 hours, too. A sad day when it finally closed, as for the next 31 semesters, Northgate lacked a pharmacy (that's spring 1998 to spring 2013, for those keeping count).

A few more pictures that I took... 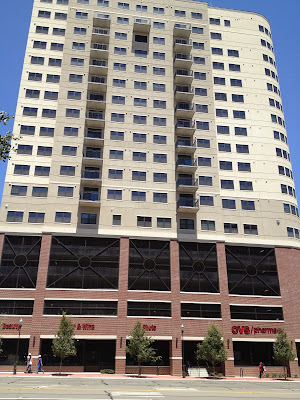 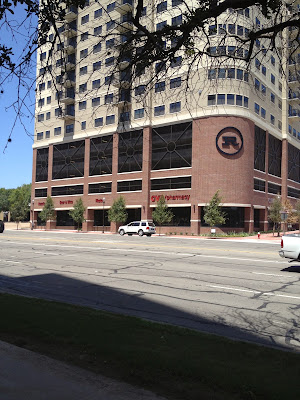 Due to the orientation of perhaps the parking garage ramps above, the CVS isn't flush with ground level, requiring going up a several steps or using a (rather narrow looking) ramp. Still, the potential is great: a huge (at least by College Station standards) apartment building, and streetside retail in a pedestrian area (something the Lofts lacked).

Around spring 2014, they replaced their bike racks with bike racks designed for the MaroonBikes rental bikes, requiring people to hook their bikes to trees or other things (way to screw over your main audience) but you could still hook it on a bench or a tree. As of 2016, they've posted signs not to park bikes in the vicinity but rather put them in bike racks in the upper levels of the parking garage, which made the CVS and its other tenants definitely less accessible.

The first tenant here was CVS/pharmacy (Ste. 101), the largest store, which opened September 29, 2013. It faces University and while it is a smaller CVS than most of its more suburban counterparts, it is merchandised to the neighborhood by having a mix of at least 50% food, though only has a very abbreviated mix consisting of a few dry foods, frozen foods, and a few other items, all priced higher than grocery stores. The best thing, at least to Rise residents, is a little hallway in the back that links the elevator to the complex (and the parking garage) with the CVS, so in theory, you could make a midnight run for snacks...or at least, it would be midnight, if they didn't close at midnight.

The second tenant is "YAKU Japanese Eatery" (Ste. 171), which replaced Great Wraps. Great Wraps opened in spring 2014 but didn't match up with its Houston counterparts. My quest for a good chicken caesar wrap on or near campus was foiled when the wrap was stuffed with croutons, and that was enough to put me off forever. By the end of 2014 it was gone, with YAKU taking its place next year. By the time YAKU opened, I was out of college, and while I was dubious of the sign offering chicken fingers and ramen (having put off by Happy Yogurt and their store-bought garbage), it has lasted until sometime around late 2017 when it was quickly replaced with Shun De Mom, another Asian restaurant.

The third tenant, located at the end, is the BB&T (Ste. 181), which opened August 2016. It has an ATM outside of it. The BB&T moved here after their old location was demolished. By late 2018, however, they moved back to their original address, this time occupying a ground level location.