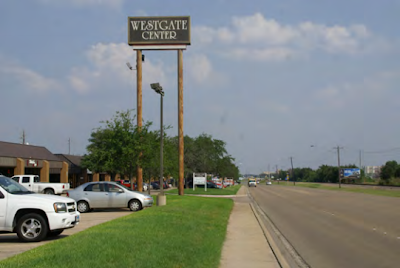 Westgate Center: A Relic of the 1980s (from the lease plan below)

Westgate Center has long been a topic I considered before finally publishing it in October 2013. In the light of the more interesting and exciting things I was doing (at least to me), it just seemed boring, and was kind of hard of research. There's Holick's, which was forced to leave Northgate (heresy for sure), and a few other places, including a Pizza Hut take-out (check out the PDF). To make this integrate better with the city directory I'm building on my other site, this will be a directory of sorts...

BUILDING ONE
4201 - Currently Kai's Doughnut Co., a gourmet (think specialty-type) doughnut shop. Sunny Food Mart as of 2012, but closed as of January 2014. The 2013 PDF said it was "Oaks Food Mart", indicating a Bryan convenience store owned it.
4207 - Pizza Hut (carry out/delivery only?) since at least 1998. In June 2018 it was still there, but as of 2020 has been reported permanently closed.
4223 - DCI Biologicals has been traditionally here at least since 2010, though I've heard reports it moved or changed names
4243 - Tiki Tan (hasn't changed since I wrote this post)
4245 - official offices for the shopping center

We take a break to explore 4337, a store that at least in the Eatology days was besides itself (all the spaces to the north were vacant, I'd have to make a return trip to see if that's changed). The reason we're talking about it here is it held a legacy of several places, and it was convenient to me since I could disassemble another Tales of Defunct Restaurants as well as re-activate part of the Stover story all in one.

Our story goes back to 2007 when Blimpie was there, but sometime around that time Blimpie "deflated" and the store closed. At the time, Stover Boys, a new burger eatery at the Exxon at FM 1179 and Boonville, was over capacity. Despite a rustic "menu on a chalkboard" theme, it needed space to expand (the parking lot would fill up and people couldn't get to either the restaurant nor the gas station). Stover Boys then opened in 2008 and would be the home base for a growing chain of successful burger joints, and it would be all local. Things were looking good.

A location at the intersection of Graham Road and Highway 6 was discussed, but was scuttled due to a complex and expensive side-mechanism that was due to some draconian CoCS ordinance about having no visible HVAC systems. Instead he went for Square One, which ended up wiping him out (see link below).

The original Stover Boys also featured a wall of comic book stuff. Daily Ruckus over at Northgate had a similar concept, but this was far more well-done...and they did it first. Debt occurred from an expensive renovation of Square One eventually caused Stover Boys to close in late 2010.

Soon after the demise of Stover Boys, "Burger Boy Café" moved into the spot. Burger Boy (no "Café" at that point), had been on Church Avenue for the last past 12-13 years (which had previously moved from 301 Patricia), and was sold from George & Tara Sopasakis (long time owners) to Ken Simmons of the "local daycare industry" (in early 2010). In or around October 2010 (about the time Stover Boys shuttered--but don't quote me on that), Burger Boy moved there and became "Burger Boy Café". Of course, this didn't last long, and Simmons closed Burger Boy forever in January 2013, after more than two decades and five different locations. Note that neither Stover Boys nor Burger Boy repainted the old Blimpie parking lot spaces. I wonder if they're still there.

After that, it became home to Eatology Paleo-Zone (though I don't think the "Paleo-Zone" was part of the name initially), which made meals that cater to the "Paleo" diet. Originally, back in 2013, I made a quip about how "we'll see what happens when the paleo diet goes out of fashion" after a pretentious quote on the website by the owner (something about paleo not being a diet but a lifestyle, or some such). Well, not sure if paleo's gone out of fashion, but as of August 2015, Eatology had its letters gone and locked up!


4351 - currently "Wes-Gate Hair Salon"
4345 - was a location of Texas Burger was there, but it closed down in the late 1990s or early 2000s. (Texas Burger is pretty rare--there was one in Madisonville, but it disconnected and became TX Burger). Later home to Home's Haven Catering
4353 - Current tenant is Knight Club. Circa 2015 it was Swamp Tails, a Cajun restaurant that sadly couldn't stay in business. Names that I can recall or otherwise researched included Barracuda Bar, Salty Dog, and X-Treme