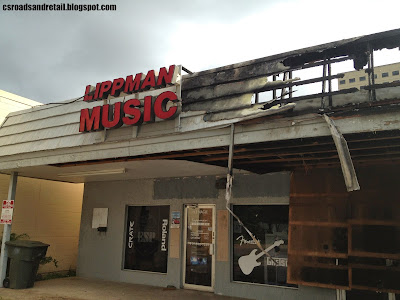 Despite looking bad, this is about the extent of it.
This building, built in 1963, has seen a lot, including the after-effects of a fire in June 2014, which despite looking worse for the wear, was only quite limited to what to you see here, with Lippman's opening the next day and Jin's the following week.

The Jin's side (110 Nagle) was originally (by the early 1970s, so presumably as opening in 1963) one of the many UtoteM convenience stores in town though it appears that it ceased being UtoteM by 1975. In 1979 it reopened to become the Universal Grocery & Snack Bar, which morphed into Universal Restaurant & Asian Grocery before closing in 1998. From 1999 to early 2002 it was Blimpie (which lost its franchisee because of a second menu serving Indian food). It appears that they changed names before closure, a 2002 listing for "Hungry Hut" does list Indian, Chinese, and sandwiches as its menu options. (Another source lists the restaurant name as "Hungry Hop"; the actual name is unknown at this time). This closed in 2003, with Jin's opening in 2005. I don't have any pictures for Jin's unfortunately, partially because it's fairly common elsewhere (see Yelp, for instance). A friend claims that the Blimpie served an Indian food menu that may have contributed to its eventual closure.

Lippman's side (112 Nagle) opened as Lippman Music in 1994 (guitars and such, not albums) after moving from Culpepper Plaza (where it opened in the 1980s) but according to Brian Lippman served as a bus station in the distant past (the double doors that don't open was a freight entrance). From 1987 to 1994 it was the original location of Notes-N-Quotes before it moved to the old Exxon next door.

In May 2017, Lippman Music closed permanently when Brian Lippman retired, with Jin's closing soon after, fueling speculation the building would be redeveloped. The building was repainted (but not otherwise touched), and by mid-2018 two new tenants were operating, BonAppeTea (112) and Nam Cafe (110).

UPDATE 08-06-2021: The fifth update to this post adds some new dates and a link to the Notes-N-Quotes article. Also thanks to "J.M." for the information on Blimpie posted a few updates back.
Posted by Pseudo3D at 11:01 AM