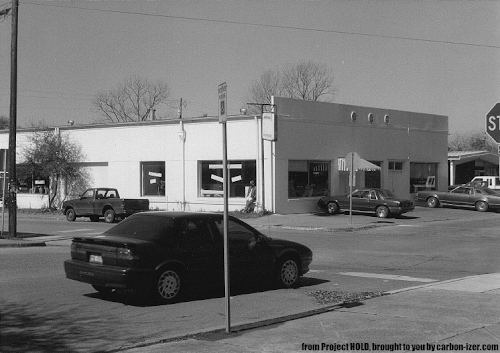 Here it is...Rebel Draft House (or rather, 301 College Main) as it appeared in the mid-1990s (I have a color version but it's substantially more blurry). Anyway, as it appears here it was Second Chance Resale operated by the Salvation Army. Before that it was White Auto Parts, which closed sometime in the 1980s.

Of course, it doesn't look like that now...it's not even the same building anymore. In the late 1990s, the city invested money in Northgate and tore down the old building and erected "Northgate Center" (Brazos CAD says 2002 as build date), with one of its earlier tenants being New York Sub (not sure on the spelling, nor if it was the same as the New York Subs in Southwest Crossing, though the time frame suggests that they were the same) in suite A. Well, that lasted a few years before it gave way to bars entirely (one bar actually).

I took this shot, which I pictured here in May 2014 looking east (from the other side of the building), with the Happy Yogurt facade in the front. While RBD has the distinction of serving me my first beer on Northgate (and that was only because I was on the right side of campus when that bomb threat happened in fall 2012), I don't care for it as it, like all the other bars, crank the music up so loud it's hard to hear anything (the bars probably had their best afternoon ever).

In 2011, this was Luckie's Ice House (and before that, "The Drink", apparently). Between the time as Luckie's and RBD, RBD didn't do much more than just throw the Luckie's sign away. I'm sure I'm missing other tenants, though.

Anyway, as for what it looks now from (roughly) the same angle, I took this picture in June 2014. Big change, huh? The Chase bank sign is just an ATM.

Updated October 2015 with fixed errors and links. Further update in March 2019 to account for new building, with April 2020 updates fixing links
Posted by Pseudo3D at 6:02 PM