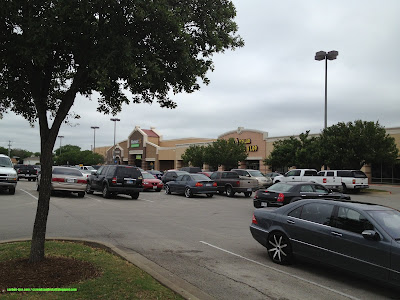 Opening in 1958 (it advertised to even Hearne) with Safeway, Lester's, Hotard Cafeteria, Kelly's Toylane, Stacy's Furniture, Texas State Optical, Woolworth's, the "Laundromart", and Sears, Townshire was one of the first big shopping destinations that started to draw attention away from Downtown Bryan, arguably the first shopping center in Bryan.

The Sears was at a slightly different grade than the rest of Townshire. At only 21,800 square feet, which was rather small (a "B" class store) for Sears, especially since a "full size" Sears was 10 times that size at the time. After Sears moved out, it would become Central Texas Hardware for a while, and eventually facilities for Blinn (which happily vacated it after their new campus in Bryan was built, as by the time that happened, the building was in horrible condition).

Here's the 1964 tenant list from a document about Montgomery Ward's consideration of moving out of downtown: 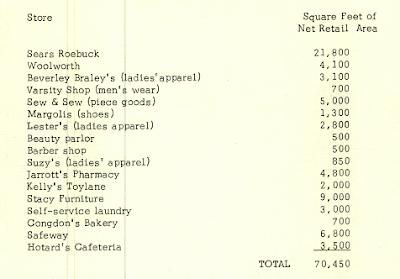 Lester's pulled out before the downtown Bryan location did, in 1973 when it moved to a stand-alone location.

Safeway probably moved out in 1977 to its later home catty-corner to where Village Foods is now, and eventually to its current home, where it lasted less than 2 years (at best) before becoming AppleTree (and you know the rest), but by that time, Townshire was already beginning its decline, with Manor East Mall and newer strip centers, like Culpepper Plaza and Redmond Terrace. Finally, Post Oak Mall opened, putting all of the Bryan shopping centers in deep decline. By the early 1980s, Townshire was getting cleared out.

Townshire reopened in great fanfare in 2002 by the same developers that built the Rock Prairie Kroger center with a new facade and a completely rebuilt north anchor, when the ratty old Sears/Central Texas Hardware/Blinn building was torn down and replaced with the area's third Albertsons supermarket, joining the two in College Station (that would be the one next to Wal-Mart and the one on University Drive East, both of which I covered) and attempted to give the nearby Kroger and H-E-B Pantry Foods a run for the money. Despite seemingly solidifying the grocery race (at the time it was built, H-E-B, Kroger, and Albertsons all had three stores in the area each), it was an odd choice since at that time. Albertsons was retreating from Houston area (after a short run of less than a decade) and San Antonio, with Waco and Austin (and the breakup of Albertsons Inc.) not more than a few years away (the three stragglers, including the one in College Station, would all close by 2011). For all its fanfare, the new Albertsons at Townshire didn't even last five years, and closed in 2006, becoming one of the shortest-lived grocery stores in town, though not even close to unseating poor Weingarten near Post Oak Mall.

But the new Townshire didn't whither up, despite the loss of its largest tenant. CiCi's and a dollar store (now King Dollar, but not originally) kept trucking, and several service-oriented tenants came in.

Around 2012 or so, the Albertsons gas station reopened as a generic "Tigerland Express" (which also never took down its "now open" banner and remained as such after it closed a few years later), and in the summer of 2013, the new Walmart grocery store finally opened.

Of course, Walmart Neighborhood Market was much more downscale than the Albertsons it replaced, but it was much cheaper and closer to what the neighborhood needed. It didn't hurt H-E-B very much, and Village Foods was having its own problems thanks to some extensive road construction. However, it too had problems. While Village Foods was going through out of business sales, it abruptly shut down as part of a major purge Walmart did with underperforming/high shrink stores.

Even when Walmart injected some new life into the shopping center, the rest of the strip never really picked up traffic and largely remains vacant. A partial tenant list is below, with the address in parentheses.

Albertsons - Albertsons #2796 never lasted long at Townshire (only from 2002 to 2006), but it made a profound impact at it. The store featured the "Grocery Palace" ("Theme Park") decor of Albertsons (though missing the high-end features), an upscale décor package that featured specialty flooring for departments. Details of the store when it was at Townshire can be seen here. Check out my other site's section on Albertsons, though it's still under construction as of this writing. The Walmart kept much of the exterior features of the Albertsons but repainted it. (1901)

AlphaGraphics - Bought out Tops Printing, a local professional printing company that relocated here after the redevelopment (2023). May 2014 picture here. (2023)

CiCi's Pizza - This replaced the old shopping center's open-air arcade with smaller stores. Can be seen in this picture(2003)

King Dollar - This wasn't here in the big re-do, but the prices have crept upwards since 2014 since the header picture was taken, now up to $1.25 as of this writing. A similar thing was noticed at Houston's 290 store. (1903)

Safeway - You can see the original Safeway building here, though it's been heavily modified (it's on the right) and moved out in the 1970s to a comparatively larger store. The former H-E-B Pantry is behind it, but that's for another post!

Woolworth - Closed at Townshire prior to 1980 (downtown Bryan one remained open).

World of Books - Here in 1980, the address is unknown (it also had a store at Culpepper Plaza at this time).

I realize that I left out a lot (I'll add others over time) but I wanted to mostly update Townshire as a consistent narrative in this March 2020 update.
Posted by Pseudo3D at 6:39 PM