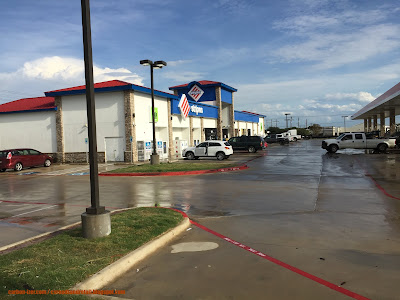 Picture from October 2019.
As we wrap up 2019 for this site, I'd like to share one more story with you. Like Greensworld, this post was supposed to be part of a "Highway 6" series. I was convinced when 7-Eleven bought Stripes from Sunoco, that the Stripes at Briarcrest and Highway 6 would be deemed an outlier and closed. That hasn't happened yet, and as such, it takes the crown of the largest 7-Eleven store in the United States (if it was actually branded as such).

The roots of this super-Stripes (600 North Earl Rudder Freeway) goes back to its roots as a mega-convenience store called Chicks. While its early years are fairly well documented on Yelp, the 12,000 square foot store was supposed to be a Buc-ee's knockoff, to the point where a lawsuit was filed. While Internet armchair lawyers argued that the logo was not a problem, a reveal inside was different, as Chicks had a line of gourmet foods similar in packaging to Buc-ee's, even a version of the sugary "Beaver Nuggets" (basically imagine Cheetos except with caramel coating instead of cheese dust). The lawsuit did force Chicks to change its logo (same shape but just the "CHICKS" name with red, white, and blue) before in 2014, when the store was sold to Stripes. Stripes briefly closed and reopened the store, and liquidated much of the old Chicks store merchandise for its own, and would replace the frozen yogurt counter of Chicks with a Laredo Taco Company (however, Chicks' hamburgers continued to be sold).

One more fun fact: a second (much smaller) Chicks was intended to go in at Highway 40 and Wellborn Road, this ended up being built as a Stripes instead.

Going forward into 2020, I intend to add much less to the site, as much of this year's content (over 40 new posts!) was breaking up existing posts and existing writing. An easy way to check on new updates is to join me on Facebook where updates, new and old, or just a post that I think deserves another look, will be posted. 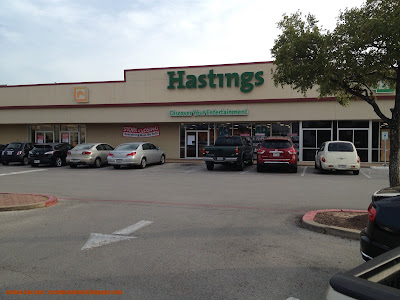 Opened in 1998 (from what I can tell from sources/my memory), Hastings was one of the big stores in the unnamed plaza featuring H-E-B Pantry and Gattitown and relocating from a smaller store at Culpepper Plaza. The chain (with the College Station location being at 2004 Texas Avenue South) was the small-town Texas version of the late Media Play, with each store focusing on books and media. There was a large video rental section that took up a quarter of the store (originally videotapes, but eventually transferred over to DVD). The video rental section would also keep multiple copies of the latest movies to hit the video market, with some good deals on those DVDs when they downsized their collection to one or two. There was a small books section (nothing like the selection of Barnes & Noble, or even Waldenbooks in the mall), as well as music, movies, and video games. Later on (maybe 2007), the Hardback Coffee Café was added as Hastings changed their logo and updated the store's exterior. By the time this store closed in August 2015 (the Tejas Center location went approximately a year later when the chain went bust), the store focused more of their merchandise on Funko Pops and other novelties.

After being renovated inside and out, the store reopened as Havertys Furniture, which opened in August 2016. A few of the exterior features added in Hastings' original renovation still stand, such as the small plaza at the north corner of the store where the outdoor seating for the cofeeshop was, as well as part of the drive-through (which originally was dedicated to returning videos, before the renovation made the coffeeshop the main attraction of the loop).
UPDATE 11-07-2020: Mild updates made to the last paragraph. 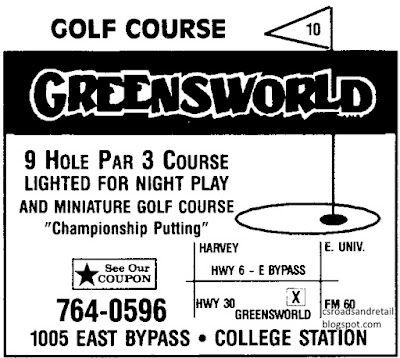 The former Greensworld has been reduced to just green again.

Editor's Note: Welcome back to Brazos Buildings & Businesses! I know I did promise a post on Post Oak Mall, which can be seen at this older post here. It also includes an update of another old post to cover stores from 1982 to 1992. Future updates (92-02, 02-12, 12-present) will probably replace existing posts, such as this outmoded post. But enough on that, it's time to talk golf...

In fact, one of the reasons I'm even bringing up this course was because my original plan was to use Post Oak Mall to segue into another series on Highway 6. That was probably too ambitious, but I have one more story along Highway 6 that's worth telling that I have never yet covered on this blog.

One of the College Station's pre-2000s golf courses was located off of Highway 6, with the clubhouse roughly between Douglass Nissan and the now-closed Ninfa's. The actual greens were accessed by a concrete bridge, and at some point, a flood washed out the other side's connection. I remember getting a picture of said bridge a few years ago (it's still behind Hampton Inn) but I can't seem to find it in my "file morgue". The address is a bit of a question, the 1989 phone book suggests 1101 East Bypass as the address, but the early 1990s phone book says 1005 (likely the "real" address).