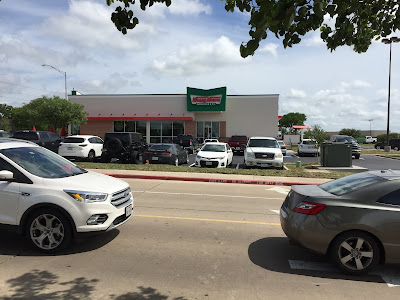 Can it stand up to Shipley's?

Like some of my other older posts, this one has gotten numerous rewrites and updates, and initially the original version of the post actually had some wrong information. This was because the supermarket in question only lasted two months. Post Oak Square was built in 1983 as a companion to Post Oak Mall (by different developers—more on that later), with one of the major stores it opened with being Weingarten.

The intrigue I've had with this plaza goes back some time, as according to the HAIF's DrFood, "Weingarten's in College Station in the shopping center next to Post Oak Mall. The store was very upscale when it opened. They had gourmet food like Central Market does, a coffee bar, and a huge candy/nut bar. They had a bakery that today would rival Central Markets. Being a Weingarten's they had the only Kosher section in the [greater area]. It then became another name when Weingarten's sold out on the verge of bankruptcy. I don't know what it is now, I think a Toys-R-Us."

The reason why Weingarten in College Station isn't well remembered is because it ended up being the shortest-lived supermarket in the area, existing from November 1983 to January 1984. On the other hand, Weingarten in Bryan lasted around 30 years.

After some discussing on message boards and reading other archived material, I erroneously determined that the intel was false, as others independently remembered a supermarket named Mariel's (or the inaccurate "Muriel's"). 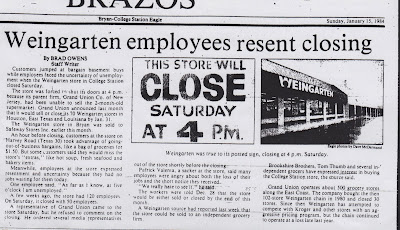 It was indeed Mariel's, which didn't last too long itself (don't know when it took over Weingarten but it lasted until at least November 1984, as that's when the ads found below are from).

The reason why Weingarten lasted such a short time here (after all, the Weingarten store in Bryan dated back to the mid-1950s) was the fact that by this time, Weingarten had been sold from the original family that owned it (yes, the same real estate company) to another supermarket called Grand Union, which remodeled many stores and built new ones, but decided to pull out just a few years after buying it, and most of the stores were flipped to Safeway. 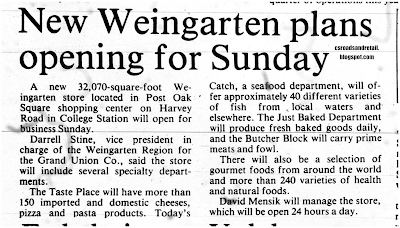 When it opened in November 1983, Weingarten was on the small side, but relatively upscale
One of the articles here mentions that Safeway took over the other Weingarten in Bryan, but I found nothing else in the January 1984 paper about the exchange (it may have been mentioned somewhere, but I didn't see anything). The reason that Safeway didn't take over this Weingarten was the result of the Safeway at Culpepper Plaza, a store with a comfortable long lease and a great location, and arguably a good thing too...the fact that Safeway bought all these Weingarten stores caused a ripple effect that would end up cutting the Houston division off from the main chain, which was shrinking at the time, to become AppleTree, only for that chain to quickly fail because of all the dated Weingarten stores Safeway picked up. 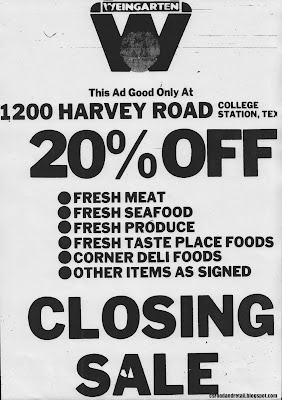 It cut off "The New" part of the logo. Sorry about that.

Listed as "Mariel's Fine Foods" in the phone book, "Mariel's Home Town Foods" was now competing head to head on "good quality, low prices" like the other stores in town were (Kroger, Six Star Foods d/b/a Piggly Wiggly, and Safeway). Here's a newspaper ad from Mariel's in '84. I don't know if it was ever officially branded as Mariel's Fine Foods, though. Note that despite "Home Town Foods" sounds downscale, it still had a number of perks, including video rental (uncommon at the time, though Skaggs Alpha Beta also did it) and grocery delivery (I don't think any supermarket in town does grocery delivery anymore). 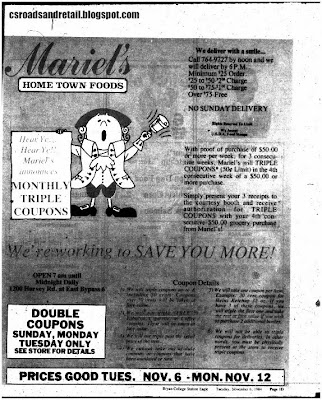 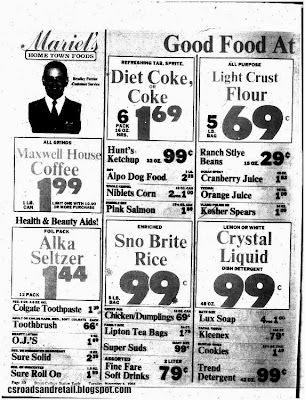 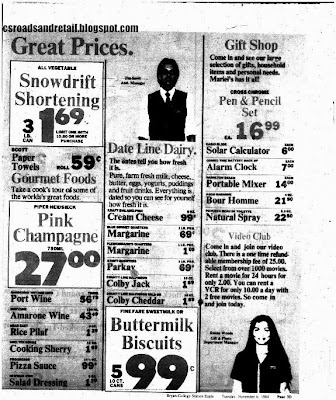 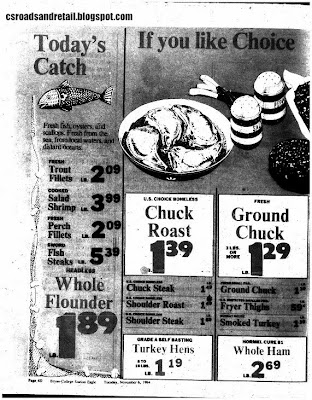 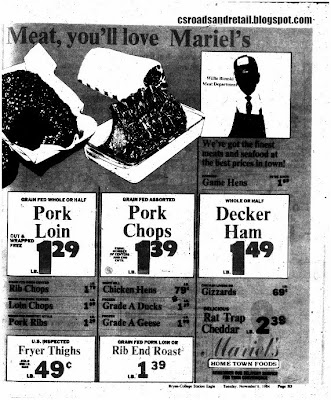 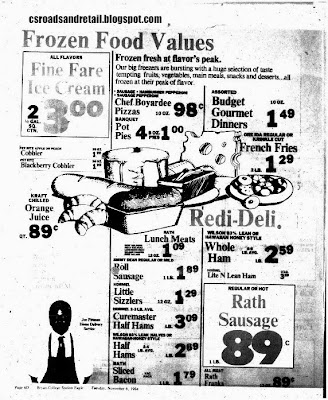 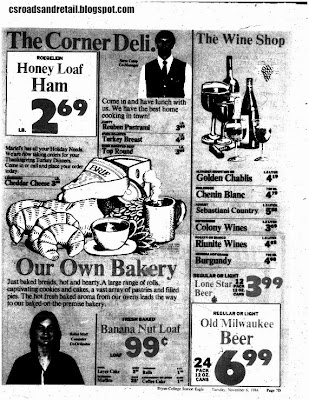 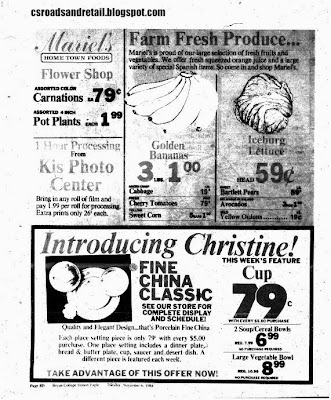 Both the College Station Weingarten's and Mariel's are obviously not well remembered, but part of the problem was that there just weren't very many people living on that side of town. Safeway at Culpepper Plaza wasn't very far away and was a slightly larger, more established store in a better location. Post Oak Square's only other claim to fame was a Grandy's restaurant (branded as "Grandy's Country Cookin'" at the time) built between the two main entrances, located at 1002 Harvey Road and presumably built at the same time as the rest of the strip (listed in the 1983 phone book). 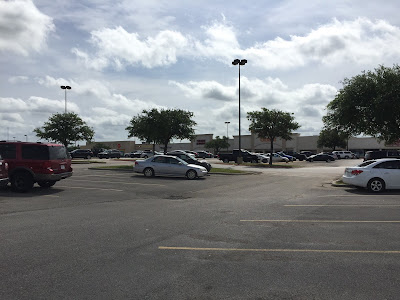 Post Oak Square had major access problems as it had very few inlets and outlets. An attempt to connect to Post Oak Mall's ring road was also shot down as the mall decided to take advantage of their property and put barricades blocking the access road, and eventually posting guards there before the driveway was removed. (A shout-out to Henry Mayo who helped me nail down where Grandy's was, and also gave information about the ring road access).

In 1986, Cavender's Boot City was built, a new retail building was built in 1987 close to Harvey Road on the west side of the building (if it wasn't Cavender's when it opened, it was by 1989), and in 1990, Pier 1 Imports was built in front of Cavender's. However, only the new retail building was actually part of Post Oak Square, and with the shopping center struggling with vacancy, a proposal to redevelop the struggling center in 1991 would involve the demolition of most of the shopping center (except for the strip of stores built in 1987 and a strip of stores next to the former grocery store space) for a modern "power center" consisting of larger store spaces. What ultimately ended up happening was a slight development by the early 1990s. Part of the center was demolished and sold to Toys R Us, which built in 1993 (at 1306 Harvey Road), Grandy's was torn down for a new entrance (given that Grandy's was a part of the 1991 plan, Grandy's may have closed by itself), and the corner block of stores was torn out for a T.J. Maxx. The main grocery store space was replaced with Hobby Lobby.

Going clockwise from the former Pier 1 Imports closest to the mall...

1402 - Mattress SleepCenters - Formerly Pier 1 Imports until the early 2000s when it moved to Texas Avenue Crossing at Texas Avenue and George Bush. This building was built in 1990 but is considered part of the shopping center.
1400 - demolished - Former Cavender's Boot City, moved out around 2006 and NEVER retenanted (it's the blank spot behind Mattress SleepCenters, and nearly impossible to see). Brazos CAD (had to go back in the archives to see) says this was built in 1986.
1306 - Ollie's Bargain Outlet opened in April 2020 following the closure of aforementioned Toys R Us.
1200 - Hobby Lobby was in the location for much of the 1990s and left for its current location as soon as the center at Texas and Holleman was built (around 2003). After it left, it was divided into two stores (1200 Harvey and 1210 Harvey), which at the time was a store called "The BOUNCE!" and the 99 Cents Store, which was expanding heavily during that time. The BOUNCE! (hereafter referred to "The Bounce") was a bit overlooked, though it had a colorful facade. According to a surviving ad I found, The Bounce was a "locally owned and operated 12,500 square foot party facility featuring your favorite inflatable castles, obstacle courses, huge slides, rock climbing walls and more, all in a safe, climate controlled environment" and featured "four private party rooms with a private jump arena are available" along with "diner seating with drinks, coffee and snacks plus WiFi access."

These things tend hinge their existence on birthday parties, and for whatever reason, it failed within a few years (maybe lasting from 2006 to 2009), and I think that it's the same reason why Putt-Putt and Gattitown declined and ultimately closed.

Eventually those two stores became different ones. Burke's Outlet is now the current holder of 1200 and the adjacent 1210 Harvey Road is Tuesday Morning. Later on (1993), a Toys R Us was built adjacent to the shopping center, but wasn't considered a part of it. This Toys R Us stayed up to the bitter end in 2018 but kept the logo until the last few years of the chain's existence.

1222 - Biosystem Fitness - Closest to Toys R Us, mostly recently housed Sleep Station (which moved)
1220 - Funky Cheveux Hair Studio - This used to (still does?) have a billboard at Villa Maria and College Avenue

Heading clockwise around the center, we have a mostly empty shopping center, however.

1140 - LifeWay Christian Stores - used to be Avenue, a plus-sized women's clothing store. Lifeway opened in spring 2014. It may have absorbed two smaller stores at some point in the past. The store announced closing in February 2019 shortly before the remainder of the chain one month later.
1128 - TJMaxx - Here since the 1990s. T.J. Maxx has been there for years, and always had some budget educational software for the Mac on sale (for some reason, CD-based computer software was a big thing in the 1990s, every store had them).
1120 - Bea's Bridal - Closed down prior to 2013, vacant ever since. May or may not be the same as Bea's Alterations, possibly merged.
1112 - Bea's Alterations - There was also a branch of Wild Birds Unlimited here but it closed in 2004 (The Eagle archives, but I can't link to it right now). Later moved to former Merge Boutique space.
1108 - Q Beauty - In 1998 and 2001, this was Treasures Gift Shop. Later moved to the former Taste of China building.
1106 - Citifinancial - Currently I have no history on this. The tenant used to be shared with Weight Watchers (which moved in March 2015), and Weight Watchers used to be 1104-D. 1104-D turns up "Kristin Dungan", which appeared to be a photography-related store.

The current tenant since at least early 2019 is Once Upon a Child, moving from 2220 Texas Avenue.

1104A - Plato's Closet - This opened around 2009 and still remains open.
1102 - Gumby's Pizza - My records say that this was Imperial Chinese Restaurant, unrelated to the one on the bypass). Ninfa's opened in January 1995, according to InSite Magazine. When Ninfa's moved around 2008 to a new spot on the bypass, the space was vacant for a few years before Houston-based Wolfies Restaurant (2012 to September 2016).

1100 is a strip in front of Gumby's with four tenants - Al's Formal Wear, Edward Jones, Bea's Alterations (Merge Boutique before it moved to Century Square), and Merle Norman. Papa John's was located here for a number of years, then closed (not moved) and was vacant for a number of years. I think it was Suite D (Merle Norman). This was actually built later (1987) according to Brazos CAD references.

1402 - Mattress SleepCenters - Formerly Pier 1 Imports until the early 2000s when it moved to Texas Avenue Crossing at Texas Avenue and George Bush. This building was built in 1990 but is considered part of the shopping center.
1400 - demolished - Former Cavender's Boot City, moved out around 2006 and NEVER retenanted (it's the blank spot behind Mattress SleepCenters, and nearly impossible to see). Brazos CAD (had to go back in the archives to see) says this was built in 1986.

Here's another reason why I don't buy the rumor that Grandy's was torn down for visibility issues: it did not seem to be stop current management from signing a genuine Krispy Kreme Doughnuts store to be built in the parking lot closest to Mattress SleepCenters. Previously, the closest College Station-Bryan had to Krispy Kreme was some products sold in Shell gas stations around 2003 and 2004, which were made in Houston (as it had a small handful of stores at the time). If you want to hear about the Krispy Kreme's first attempt in Houston, I suggest you visit Houston Historic Retail, which is not my site but I recommend it anyway.