Pooh's Park, Tinsley's, and Others Replaced by a Shopping Center 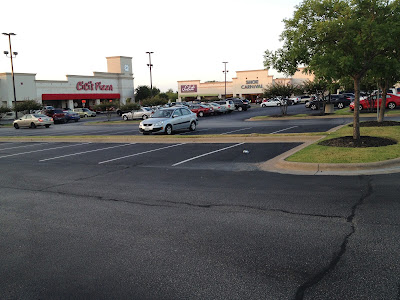 View of the center today

Once again, we come back to one of our blog, this time to roll a few smaller posts into a bigger one. As the picture above shows, the area at Holleman and Texas Avenue is now a large (kind of low end) shopping center. In addition to covering all the changes that went on there (which I have yet to do), I can combine a few older posts into this one. So, first, we have Pooh's Park at 1907 Texas Avenue South.

There's far more to Pooh's Park (no, not related to the "Winnie" one) I can get into today, because it's a popular topic on local nostalgia threads: if you want to learn more, you can head over to Facebook to talk or browse through old photos (and they include newspaper articles!)

I never got to experience Pooh's Park myself, but from what I've seen and read, it was like Chuck E. Cheese, Putt-Putt, and a skating rink (roller, not ice) all wrapped into one. It opened in 1972 and was where the shopping center where Hobby Lobby, Big Lots, and Ross are now. I would like to say that Pooh's Park remained open until it became too valuable to remain (and was getting run-down anyway) and closed in the early 2000s, but no, that's not the case. It closed in by 1989 (at that point, the phone book no longer lists it) and only the sign remained up (with the logo of the yellow dog they had, and not the one pictured above, and the name gone) until around the time they built the shopping center in the early 2000s, and then remained up until a little while afterward.

A 1984 phone book has a different ad that does mention things like a water slide (408 feet) and a different address (at some point, they changed to 105 Holleman, though based on what you can see from Google Earth, and backed up by a picture of Texas Avenue from a local history book I don't have a copy of with me) is that Pooh's Park was accessed through Texas Avenue, not Holleman. 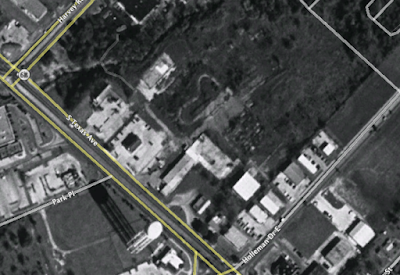 Some older maps (circa 2001-ish, long after Pooh's Park bit the dust) put a "Pooh's Lane" roughly where the Bahama Buck's is now, but unless that first part of Holleman Drive East was actually called that (after all, there's a few things that do support that, including the odd alignment of Holleman Drive and Holleman Drive East suggests that the East part was first, and then Holleman Drive extended that way later by way of a particularly awkward curve, or the fact that the subdivision nearby (behind the strip center and the other businesses on the east side) is named Pooh's Park Subdivision.

Sharing the address with Pooh's Park (at least the original address) was one "Furniture Liquidation Mart" which closed in October 1985 (The Eagle), and I would guess that this is what Bahama Buck's replaced (it used to be the foundations of another building). It should be noted, though, my 1984 phone book doesn't list it. 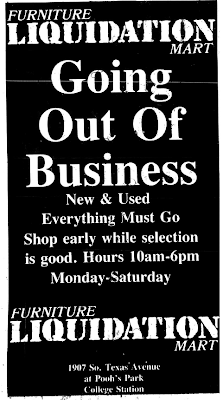 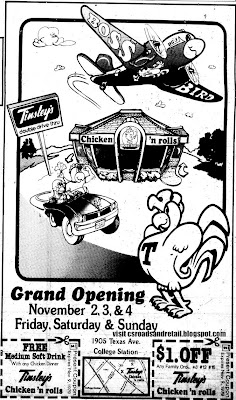 Chicken done well, chicken well done!
Opening in late 1979, Tinsley's was located on 1905 Texas Avenue but was closed by 1989 after the Tinsley family sold out to Church's, which would eventually close or convert the restaurants (I don't think this restaurant was ever converted). Later, it was Kokopelli's (by 1998), and soon after, the Clay Oven (by 1999), a quick-serve (cheap!) Indian restaurant. This location, unfortunately, was razed for the shopping center, but Clay Oven was already closed by then. I have no actual pictures of what the building looked like in reality, nor do I remember Clay Oven being there at all. Sad, isn't it?

The plane was a real thing, though, David Tinsley used an actual 1930s plane to promote his restaurants, not unlike how Flying Tomato used hot air balloons.

While the "Boss Bird" made a brief appearance in Huntsville (after a long period of total absence), it is now closed (now a Hartz Chicken Buffet). It wasn't particularly to die for (although I think the "dried out chicken" complaints were an over-exaggeration, at least from what I saw in my visit).

There were a few other places on Holleman that later disappeared beyond Jot 59 (see picture), though one of them was a quick-lube auto place (name escapes me).

So anyway, all that was torn down for the shopping center (University Shopping Center, the name of which wasn't promoted), which opened around 2003 (after the H-E-B, I remember), with many of the stores it has today (Hobby Lobby, Shoe Carnival, Ross Dress for Less, Petco). Hobby Lobby moved from their old location at Post Oak Square, with the others being new. There was a branch of Loupot's, CiCi's (which came a few years later, as the old Culpepper Plaza was partially demolished), and a Goody's Family Clothing.

Goody's would close in early 2009 as the chain went under, but it was replaced with a few new stores, Big Lots (returning back to the market, as by that time, their old location at the former Kmart had been closed for several years) and a Twin Liquors (which, despite slightly nicer décor, seemed like a smaller, inferior competitor to Spec's).

Another shopping strip was built around the same time as the rest (but named The Shops at Wolf Pen Plaza) with Starbucks Coffee, a Sprint store (which initially had the older logo), and Champion Firearms (moved from the Kroger shopping center).
Posted by Pseudo3D at 9:31 AM