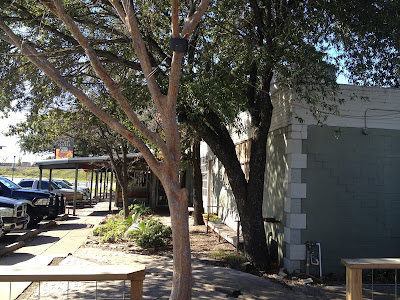 Taken by me, on the last day Café Eccell was legally operating on the city's lease, January 14th, 2014

A few years ago, I showed you the former Luby's, which as of this writing isn't updated yet (when it is, I'll do a quick update on this page to remove that disclaimer), which is where Eccell is located today.

For a number of years, though, Café Eccell was located at the corner of Church Avenue and Wellborn, 101 Church Avenue. The building of Café Eccell, as plain and kind of ugly as it was, used to house the city's first city hall and jail back in the 1940s (built 1947). The city hall moved out in 1970 when a new building was built, and I'm not sure of what it was used for later (the police station was also in Northgate during those days, though not that building). The city held onto the lease and in 1989, it reopened as a restaurant, Café Eccell, which featured a classier, "adult" atmosphere and food that the rest of Northgate lacked, and still tends to lack today.

The first incarnation of Café Eccell closed permanently in March 2014 a few months after its lease ran out (why the city never locked them out is unknown). The restaurant opened in 1989, and after changing of hands to the Dallis family completely around 1991, the restaurant continued for many years. The food was also plagued by inconsistency in its latter days as well as the drama involving the Dallis brothers (a.k.a. Eccell Group), the developers, and the community as a whole.

A few months later the building was wrecked for The Domain at Northgate apartment building, which is only four stories, occupies the whole block, and includes retail opportunities, though only one is currently open (4.0 Cuts Barber Salon, opened spring 2016). The building itself was ready in time for the fall 2015 move-in season, and for a time had a leasing office in the former Cycles Etc. on University Drive. A second tenant, Dat Dog, opened in September 2018. It was an odd choice, considering the chain had no other locations outside of New Orleans, not even in Baton Rouge. The restaurant closed in October 2019, citing parking issues.

Of course, the Domain was not the first development to try to redevelop CE, it was to house "Gameday Centers College Station" circa 2004, a large multi-story tower (about 7-8 stories). Gameday Centers was largely doomed to begin with: the company was building luxury condos for big-money donors to stay in on game weekends, but the asking price of $500,000 a condo was too much* (it would be a better value to buy a house in the Traditions subdivision, which is what many have done), negotiations with the city broke down, and rather than a first phase done by August 2007 and completion by December 2008*, it was canned. The center would've had 10,000 square feet of restaurant and retail space and had even signed a 10-year lease with Café Eccell as part of the agreement*.

*Unfortunately, since this page was originally published, one of the links I had for this page has gone dead and I have been unable to relocate it, as the Batt link is dead and Archive.org does not have it. Likewise the links for the other links seem to be lost. 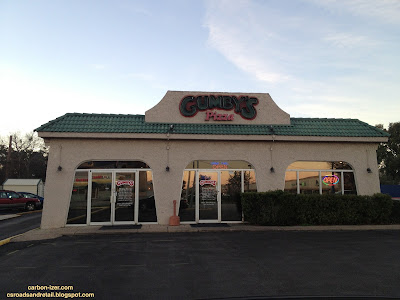 Falling by the Wayside, A Look at Former Restaurants at 102 Church Avenue 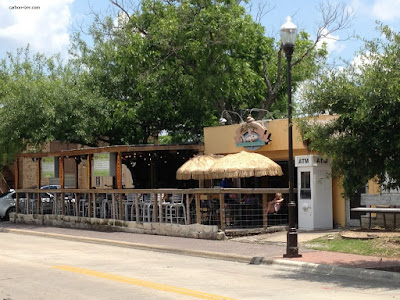 Having no memories of this establishment save for a few photos I got summer 2014, I've been thinking that I need to cover this, especially since (for several reasons).

The building was built in 1959 as per Brazos CAD. It appears it was built as a house, the first reference coming from a 1963 obituary about one Mrs. Marguerite Mary Edmonds, age 48, but it was later restaurants. The years that are listed come from the best references I have of the restaurants. Currently I don't have any information on any restaurants that took the space in the late 1990s (if there were any).

1977 - Dead Solid Perfect
This restaurant was listed in a dining guide list in The Eagle in 1977. All I have for this is description is from Yuccadoo on TexAgs.


Who remembers getting a burger at DSP? (Dead Solid Perfect). It was in the same building that is now a restaurant across from Cafe Eccell. No exhaust vents, smoke pouring out a coupla windows in the kitchen, made the best burgers commercially available in the world (IMO).

1980 - One Potato Two Potato
This was the restaurant listed in the 1980 phone book. I have no information on it.

1983 - Two Blocks North
This was the restaurant listed in the 1983 phone book. I have no information on it.

1984 - La Taqueria & Tortilla Factory
"La Taq" was the most memorable of the restaurants in the space and is still talked about even today.

1991 - Rosalie's Pasta House
According to Aggieland 1992, Rosalie's Pasta House opened September 25, 1991 in the former La Taqueria space. Directories indicate that it was open throughout the early 1990s. I don't have information on the space for the late 1990s, however.

2000 - La Bodega
This is when La Bodega Baja Taco Bar opened (as they closed in November 2014 after 14 years, or so they said). Here's the La Bodega specials, May 2014. One of their specials is the hotter it is outside, the cheaper drinks are. Not a bad idea.

So, why the title of this one? Well, despite some talk of more upscale dining in the Northgate area, it and the adjacent apartment building next to it (104 Church Avenue, where Eccell Group operated out of) was torn down. What has replaced it is supposed to be a food truck park, called Wayside Food Park. It was supposed to be a permanent place for food trucks complete with electrical conduits and a covered pavilion area, but it failed hard, opening in December 2017 and closing by early 2019. In regards to the apartment building, I have terrible pictures of that, the one with my finger covering a quarter of the shot is from this May (2014) and I do have a better picture that shows the building as a whole but I can't find it, and really it's not much better than what you can see from the older shots on Google Maps Street View.

Updated May 2019 to account for the coming and going of Wayside
Posted by Pseudo3D at 2:05 PM 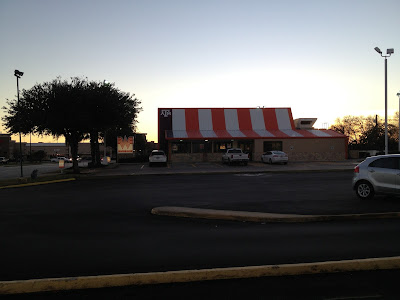 The sun sets behind this Whataburger, but don't worry, it's open late!

This Whataburger at 105 Dominik Drive is another restaurant that has been here for decades (though been rebuilt a few times). This is the closest Whataburger to campus and I've heard (and felt) like quality is a bit sub-par compared to the Rock Prairie Whataburger. In 1969, it changed hands from an unknown seller to Grace Dobson (wife of Whataburger founder Harmon Dobson), with the earliest reference in newspaper archives to this location in 1971. In 1987, Grace Dobson to Whataburger. It changed hands again in 1987 to Whataburger officially, which was about the time a rebuild of the store commenced, as a permit had been filed in 1986. Regardless, it was rebuilt again in 1996. This is what Brazos CAD says about the store, and that is correct--I had heard when I was a bit younger of a large fire at the store in the 1990s, and later I found a newspaper that said that it did in fact burn down in January 1996, with a "mobile Whataburger" serviced the area until the Whataburger reopened that spring. The store was No. 78 even in the Dobson days and it still is.

While it is the closest Whataburger to campus, for a brief time it was not as you could get Whataburger in the Sbisa basement, and with the revelation that they had a "mobile Whataburger" even back in the mid-1990s, it makes me wonder how much money a Whataburger food truck could still make on campus today. It was at this location that I realized Whataburger had subtly changed its logo.

Today, it has an all orange logo (formerly, the name was in black and there was often blue trim). Compare this picture (not mine!) to the store today. There's another blank lot nearby used for overflow parking. This used to be a Shell station (it was a Texaco prior to 2003) just about three years later when Texas Avenue started to widen, and demolished a few years later. Since then, nothing has taken its spot, but it provides excess Whataburger parking. It was one of the "Max Food Mart" stores that were in a lot of the Texaco stores at the time. The gas station at 1405 Texas Avenue I believe did not co-exist with the old Zip'N at George Bush and Texas, as the stores I remember converting around January 2003 (Eagle archives show the conversion of the store at Southwest Parkway and Welsh converting, and I think that was one of the first to convert), and by February 2003, the old Zip'N had been completely leveled.

Update May 2019: This Whataburger is scheduled to be rebuilt soon, and the Gumby's has moved out.