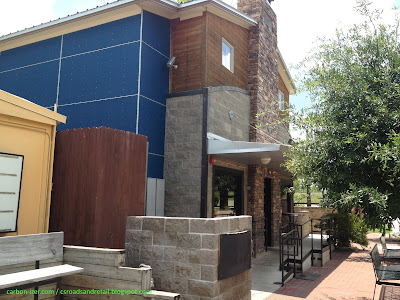 2014 picture by author
Church Avenue, another Northgate street, was always Church Avenue. It used to be when you could refer to this as "Church Street" and no one would care, but since the 2011 annexation of Wellborn, which has an actual Church Street, it forced the Church Avenue name into more common usage. Renaming either street would meet resistance, so we'll have to live with what we got.

The building at 100 Church Avenue was built in 2010 and opened before the "Great Church Street Mix-Up" and originally opened as "Church Street Blues and BBQ", which I personally never was able to eat at since it was not open for lunch and only in the evening and night of certain days (weekends and the days leading up to it). It was one of the first places to have New Republic Brewing Company beer on tap back in 2011, but in 2014, Church Street Blues closed.

In September 2015, the site became the home of "West End Elixir Company", which catered to an older crowd, with much of the staff being veterans. It also served wood-fired pizza. It closed in 2018 within a year of a new location opened in downtown Bryan.

UPDATE 02-10-2022: Removed note about being split from this post at press time. Added additional labels to post. Removed metapost about no longer doing a three-post-a-week schedule (wow!). Finally, a restaurant called "CALZ" opened here in July 2021.
UPDATE 03-26-2022: Whoops, CALZ isn't open yet; still, the owner vows to open despite having signed a lease and remaining closed for over a year. Some updates were made to the existing post.
UPDATE 05-10-2022: CALZ finally opened in late April 2022 but shut down less than two weeks allegedly due to a legal dispute. This may be the shortest-lived restaurant in the area ever.
Posted by Pseudo3D at 8:19 AM