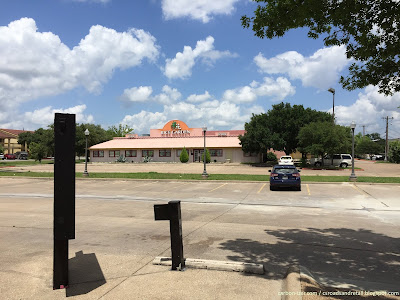 The big black thing in the foreground is the menu board for Taco Cabana. Picture by author, May 2019.
Behind the Taco Cabana (now Las Palapas) was another restaurant at 102 Live Oak. Planned as "City Slickers Steakhouse" but known as La Barronena Ranch Steakhouse when it opened in late 1994 (no ad at the moment, so I can't confirm if it had a tilde over the n or not).

The later tenant chronology includes College Station Seafood (operating from 2004 to January 2011), Oceans Bar & Grill (operated in the very early 2010s), Vy's Kitchen Asian Cuisine (opened July 2012, same ownership and menu of Vietnamese Taste), and finally Rice Garden (changed hands around 2018, despite Yelp treating it like the same business, it appears that it was a separate entity--a residual link from the now-defunct EatBCS mentions that it was under construction as of September 2018).

Rice Garden closed around 2020—apparently a victim of COVID-19, and as of this writing, is vacant.
UPDATE 03-15-2021: Rice Garden is now closed permanently. It appears it was a victim of COVID-19 last year. Also, the Taco Cabana referred here has since closed and replaced with Las Palapas.
UPDATE 05-21-2021: Made a more extensive update that fixes a pressing formatting error but also adds dates to businesses.
Posted by Pseudo3D at 6:00 AM