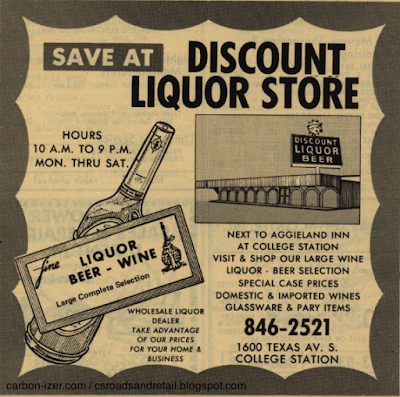 In the pre-JJ's days, though all but the ball-looking thing at the top of the sign survived to the end.
Originally located at the now-defunct Texas Avenue page and later at this page, this former liquor store (1600 Texas Avenue South) has been near the corner of Harvey Road since the 1970s (original build date unknown, it was listed in the early 1970s phone books but did not exist in 1971 as per aerials), originally as Discount Liquor Store. J.J. Ruffino bought it in 1983 to complement a Bryan store, and it remained as such for decades. In late 2010, Ruffino exited the liquor store and sold the three stores to Spec's. Spec's converted the store on Rock Prairie and Longmire to their brand but kept the two stores as JJ's, eventually converting them to wholesale only. I went into the store only once in 2016, when I applied for a job in the chain, though for unknown reasons it fell through. (I can tell you that the inside of the store was dark and dingy). The location at Redmond and Texas Avenue closed in 2017 when Spec's built a new store at University and Highway 6 at the former Linens-N-Things that incorporated their wholesale operation.
Southbound on Texas Avenue, March 2014, from car.
Southbound on Texas Avenue, March 2014. Another view.