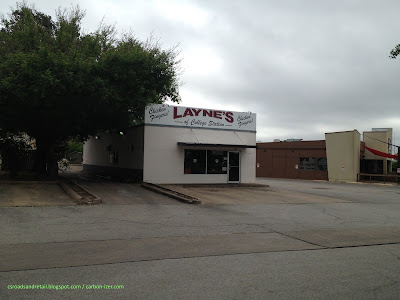 Picture from author, May 2014. Note the former Sully's in the background.

Built in 1962 and home to Wilson Plumbing Company for many years, Layne's of College Station has been in operation at 106 Walton since 1994, serving little more than fried chicken strips, Texas Toast, and a spicy mustard-based dipping sauce. It is similar to the Raising Cane's chain, though actually predated the chain by two years, but unlike the 400+ locations of Raising Cane's, Layne's just has three, the original, Southwest Crossing in 2006, and a third location near Caprock Crossing opened in October 2015. (This post is split from this one).

It should be noted that Brazos CAD says the building was built in 1962, but Wilson's website suggests that they have been at Eastgate since 1945. It's entirely possible that they moved or rebuilt once while in Eastgate.