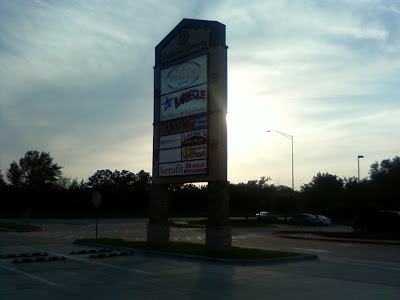 The sun angle was bad, plus it was taken on my old cell phone camera.

Southwest Crossing was built in the mid-2000s, I believe it was late 2005 or early 2006 when it was completed. As far as a 15-year-old center goes, tenant turnover is surprisingly low, so here's what we got so far, starting from the side closest toward the university (from the left, should you be looking at it head on).

The stand-alone Layne's of College Station restuarant opened sometime around fall 2006, and was far more modern than their Eastgate store. This has the address of 1301 Wellborn Road. Behind that was originally C.C. Creations at 1311 Wellborn, and the first big tenant to open, moving from their warehouse center on Holleman. Interestingly, in 2013, they moved out, consolidating with the Trophies location (Harvey Mitchell Pkwy. and Southwood) into the former Red Oak Sportswear building (very close to where they were before). Later on, this became a fly-by-night tutoring operation (one-on-one, not a group "here's how to pass the tests" type) called Aggieland Tutoring. Around 2017, part of the space became Texas State Optical, and another part became Vivint Smart Home. A section still remains vacant and is rumored to become a restaurant.

The next building, 1411 Wellborn, has four spaces. The first one (Ste. 100) was Haix Stores, which was here since summer 2009. I'm not sure when it closed...it became Tacobar by fall 2016, and I believe it was still open by late 2015. Next to that was - New York Subs (1411 Wellborn Ste. 200) which opened in 2007 (reported as "New York NY Fresh Deli" but the signage was New York Subs) was replaced with the suspiciously similar "Sub Culture" a few years later (probably because the master franchising company out of Arizona went under...but that's just a theory). But Sub Culture couldn't last and in early 2012 it became "Harold's Hot Dogs & Ice Cream", a local outfit serving hot dogs and ice cream. Harold's closed in June 2014, which was a bit of a bummer because, in essence, it was Maggie Moo's from the Rock Prairie Kroger center, and with the passing of Harold's went a number of unique things, including their oatmeal cookie ice cream. In spring 2015, it reopened as another Kolache Rolf's location but closed permanently in 2018. It's still vacant. The next tenant (Ste. 300) is Marethouse Fitness, a locally-owned fitness center that had signage up during COVIDmania but later opened by late 2020/early 2021. It was Aerofit Express (I believe it closed before the whole Aerofit chain sold), before that was an Anytime Fitness franchise before, and for the longest time the leasing office for the Woodlands of College Station. Before THAT, it was a location of University Book Store that opened around January 2006 but it lasted only a few months before the chain went under.

Finally, The Beach Tanning Salon (Ste. 400) was one of the originals, but it closed by the end of 2014. Later it became the similar Tiki Tan, but it closed in the summer of 2019.

The last building has two tenants with the address of 105 Southwest Parkway, holding a C&J Barbecue (third location) and Hungry Howie's Pizza, the latter being the first College Station-Bryan location in town. This opened circa 2006, and is still the only HH's Pizza in the county, as a second location in town closed after a few years). They made some news in the sports universe when they had a Heisman trophy pizza.


The last building is 105 Southwest Parkway, and both have that address. Here's two more pictures from 2012 of the center building. 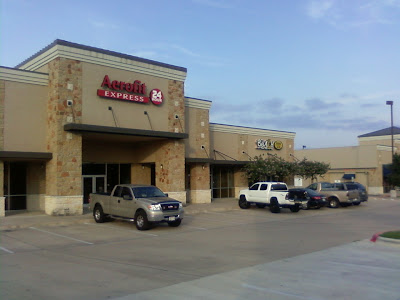 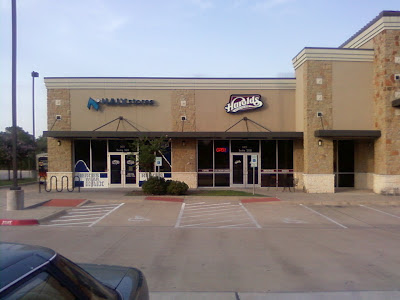