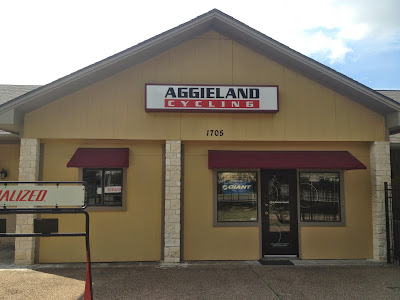 The late 1990s were a pretty sleepy time for College Station, and that was where I spent my youth. Many of these have been covered, but for mini-golf, it was Putt-Putt Golf. Located off Valley View and Harvey Mitchell at 1705 Valley View Drive, and opening circa 1988 (after the 1987 filing), Putt-Putt (no relation to the children's adventure game by Humongous Entertainment), was always pretty small (nothing too fancy, no windmills or exciting options, mostly green carpeting, beginner and less-beginner golf courses), some large fiberglass animals thrown around (giraffe, elephant: trying to with a vaguely "safari" theme), plus an arcade with tokens and prizes (it was really small--I don't even remember it having air conditioning or not, even as of circa 1999), a batting cage, and a small area for bumper boats, the only place in town for them. I later discovered that the establishment opened as a franchised location and taken over by the main company in 1991. The blurb that I found mentioned it had been expanded slightly, though I don't know what features they actually added.

While the bumper boats and mini-golf were unique, it was no Gattiland. If you wanted to have fun as a kid in those days or wanted a cool place to have a birthday, you went to Gattiland, case closed.

The logo. It's an edited version from Putt-Putt of Rome, Georgia, which did not update their logo, enabling me edit it for the purposes of this article. 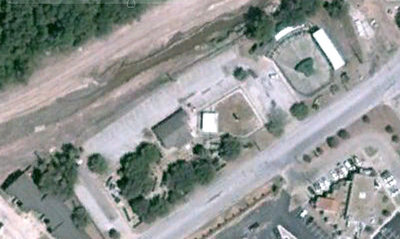 Probably because of that fact (and everyone knew it), Putt-Putt just got sadder and more run-down over the years. The bumper boats went first, closing in the early 2000s (not that it was very big, I think it could only fit four), then the Putt-Putt name ("Brazos Valley Golf & Games" was the new name). By 2005, they had converted the bumper boats area to a skatepark, which seemed mildly popular. But by the end of 2006 (or early 2007--help me out here), the whole thing was closed, with only some tattered mini-golf holes, a creepy-looking abandoned batting cage, and those fiberglass animals, now fading in the sun.

Eventually the batting cage and mini-golf remnants were demolished, and the bumper boats area filled in for good for its new tenant: Paradise Scuba, which relocated from Parkway Square. They doubled the size of the old arcade building, even adding in a swimming pool inside (why they didn't use the old Bumper Boats area, who knows). They did, however, leave the lighthouse from the bumper boats area, though the lower rungs were removed so you couldn't climb up. 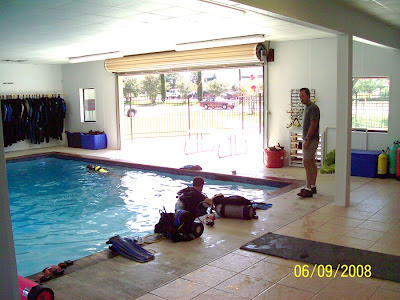 Paradise Scuba opened in September 2008 closed in June 2012 for good, despite the renovations to the property. Two years later, it reopened as a second location of Aggieland Cycling, which presumably filled in the pool inside. Neither business used the old batting cages area, and in late 2016, Domino's began to build a new location there (replacing their location on Texas Avenue near Deacon and Sunset Gardens), which opened in April 2017. The Domino's (no "Pizza" anymore due to corporate rebranding) has the address of 1801 Valley View, and unlike its old location, features dine-in seating. Weirdly, the official "entrance" to the pizza restaurant is the far side of Aggieland Cycling's parking lot, the closer driveway (shared with Aggieland Cycling) is supposed to be an exit-only lane.

Going back to Putt-Putt, it lasted over a decade, but to this day, we don't have a real mini-golf place. Sure, Grand Station Entertainment, the only place for bowling (Triangle Bowl and the MSC met their demise around the time Putt-Putt closed up shop) or mini-golf (of the "glow in the dark" variety, and they've got some sort of weird Western theme going on. If you want to golf in College Station, you'll have to stick with real courses and driving ranges.

Extensively updated in July 2014 with new tenant and picture, then again in 2015. In October 2017, a number of later updates were integrated. Minor updates in April 2020