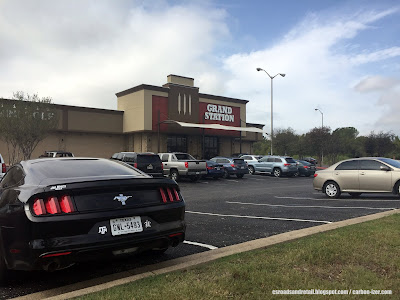 When this opened as Lowe's, the frontage roads were still two-way.
While Bryan got a Lowe's store sometime in the mid-1990s and College Station 2010, College Station did have an even older Lowe's store. As it turns out, we did get a Lowe's back in the mid-1980s, on the bypass. It was much different than the Lowe's of today, much smaller and featuring slightly more departments before streamlining (like electronics!) but it didn't do so well, and closed circa 1989. From what I can read up, it became Brazos Valley Golf Driving Range (2400 East Bypass), but by the 1990s it was known as Wolf Pen Bowl & Skate, which featured a large roller skating rink, a snack bar, and of course a bowling alley, which I remember as being slightly better than the MSC's but not by much. Toward the back was PowerSports Gymnastics (which was fairly large and did have a small upper level viewing area, like Acrofit's, except larger). There was also, apparently, a vertical wind tunnel in the early days when it opened around 1994, but that seems to have been gone soon after (if it was ever built).

Unfortunately, I have no pictures, save for the ad below. It seems based on the ad that they sub-leased the space, and I recall hearing that after it closed it was used as storage space. Sub-leasing or not, I also seem to remember that you could access the gymnastics area through the main bowling area. 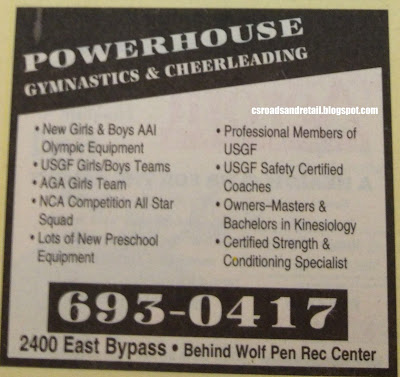 Ad for the gymnastics portion, originally "Powerhouse" (not PowerSports)
It later became Power Gymnastics (the "Sports" being conspicuously removed from the sign) before finally disappearing around the mid-2000s, which was about the same time Acrofit kicked the bucket. The last time I remember going to the skating rink was probably closer to 2004 (sixth grade, always an awkward experience), but by 2007 it was acquired by a new owner. While this meant the loss of a different bowling alley in town (Triangle Bowl in Bryan, which was even more run-down than the other two alleys) it meant that Wolf Pen Bowl & Skate would be renovated. The plan would be like "Boonville Station", a similar project planned in 2005 in Bryan but never got off the ground, and soon Wolf Pen Bowl & Skate closed and was gutted for a new bowling alley, an arcade (though the original Wolf Pen Skate had a few arcade games, I think), glow-in-the-dark mini-golf, an expanded eating area, and laser tag. This, of course, was Grand Station Entertainment, which remains today. The ugly blue facade remained for a number of years afterward until around 2015 when it was rebuilt. 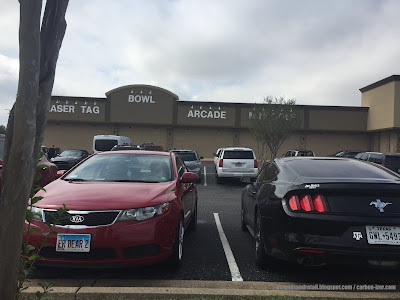 The other side of the facade.

I don't know if the Wolf Pen Bowl built in front of the store (the aerial suggests the building was expanded to the front and the parking lot altered) or not, but one wonders if they had simply expanded. There's certainly enough space to. 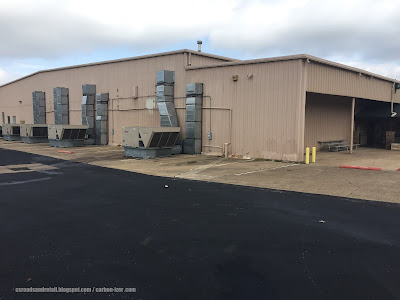 The back of the building still looks like a warehouse. 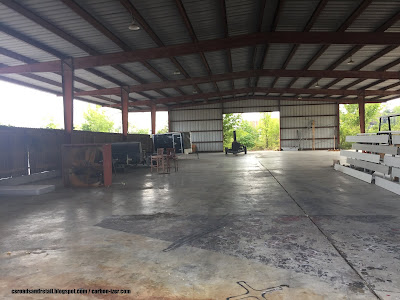 The covered former lumber yard area is used for storage, and fenced off. 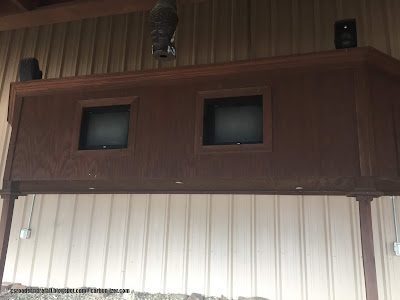 These televisions, located in an outside eating area, were presumably installed in the renovation, but were outdated from day one.
Last updated in July 2020
Posted by Pseudo3D at 1:19 PM