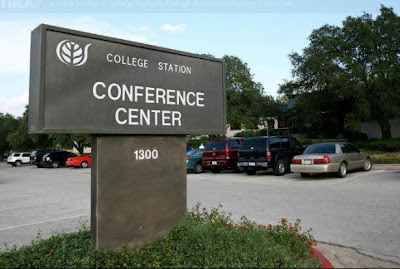 Yesterday (from when this post was made), College Station Conference Center was shut down...basically condemned due to concerns that the roof would collapse. And to me, that may be "well, it was old and needed to be torn down anyway for a more modern building", but to me it was kind of special.

For starters, it had the first permanent building off campus for the CSISD, holding first through 12th grade, built in ~1949. The high school would move out in the 1950s or 1960s and again in the 1970s (the latter building will be explored in a new post coming soon). It also had a green triangular overhang and a newer very 1980s wing built in front of it (which was there at the opening of the Conference Center in 1982), plus it was one of the few areas to use the "old" College Station logo, which has been excised practically everywhere else. It used to be on the water tanks, even in the pool at Southwood. Additionally, in the 1949 wing, it had wooden floors (carpeted) which was great: it gave the floor a nice spongy, comfortable feeling not found in newer buildings (the last major wood-floor building on campus, for instance, was Special Services Building). And more importantly, there I was volunteering at Project HOLD, which sadly eliminated its full time job position not too long after I worked here. 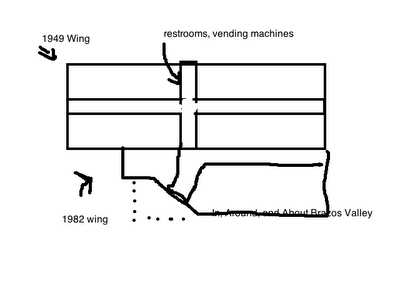 In 2010, I tried to get a volunteer job there, as I had done last year. Regrettably, they could not accept me, so I did the next thing: create my own archives. Do my own research. And publish what I found in an easy to view, easy to access format. This website that you're looking at, Brazos Buildings & Businesses, hosting on csroadsandretail.blogspot.com or possibly carbon-izer.com, is the result of that.

Here's another picture of the Conference Center (the newer wing), from the same Flickr page as the image on the top of the page came from. As you can see, it's solidly early 1980s. I do miss those hexagonal tiles, though. 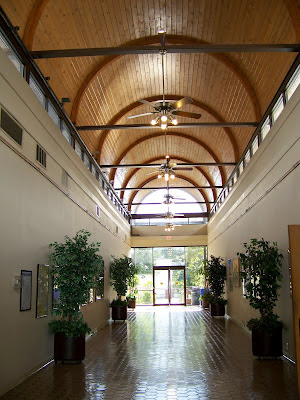 When I originally published this post, I included a hand-drawn map of the building as I remembered it. Turns out the city had their own floorplan, which I saved since the original link is dead. I wasn't too far off the mark: 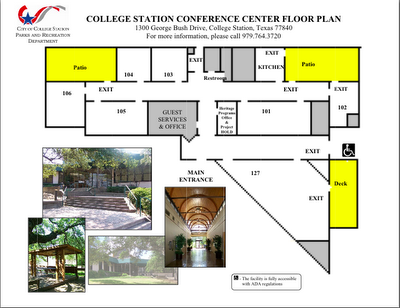 Anyway, in late 2012 or early 2013 it was announced that the building would not reopen, and instead it was demolished for College View Alternative School, hosting both Venture and Timber Academy.

Updated Nov/15 to merge updates and update something else.
Posted by Pseudo3D at 12:50 PM