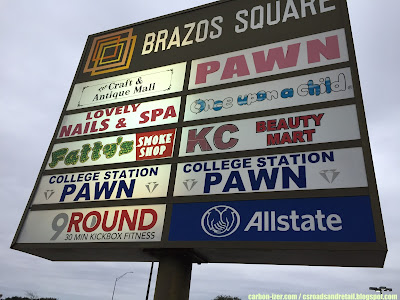 Brazos Square's modest signage, picture by author, January 2020 (as with other photos in this page)
Moving on from the Kettle, the next stop is Brazos Square at the southwest corner of Manuel Drive and Texas Avenue, and once again, many places between it and the Kettle have been covered. Both Park Place Plaza and Parkway Square (newly updated to account for College Depot's replacement), as well as NailSpa, the old Pelican's Wharf. Even Drew's Car Wash was mentioned last year, and I never imagined covering that had it not been for a hamburger restaurant that previously occupied the spot. Down the road from that is currently BCS Tires & Lifts. And of course, the Walgreens at Brentwood and Texas, or more accurately what was there before.

The sleepy Brazos Square shopping center was built in 1984 (according to Brazos CAD) but tenants were here as early as 1983. Despite promising exterior renovations, the shopping center has not yet seen anything. Unfortunately, getting information on old tenants on older tenants is difficult, like how ads for old businesses in Culpepper Plaza never mention addresses. It must have been all suite numbers, because some of the oldest businesses I've stumbled across including Toys Plus or PrioriTEAS all have 2206 as the address. 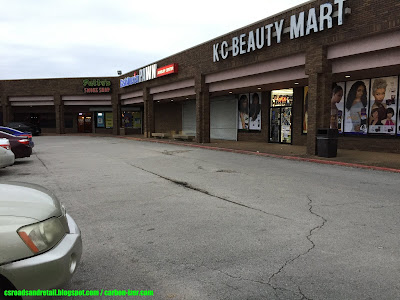 The pawn shop isn't pictured in this set.

2232 - College Station Pawn Shop. As mentioned in the Confucius Chinese Cuisine article, this was (back in the 1990s) Imperial Chinese Restaurant (not related to the place out on the bypass), which outlasted Confucius. The pawn shop was next door, and moved around 2002 after it and Confucius got torn down for the Walgreens. When the pawn shop's "new" building (at 2305 Texas) was torn down around 2006 for a new The Bank & Trust, the pawn shop moved back here, just one place down from its original location. The address is also shared with The Vapor Cave next door, which in the late 2000s and early 2010s was Loan Depot.

2230 - For years this was Advanced Wireless Inc. (through most of the late 1990s and early 2000s anyway). It closed in the mid-2000s and became All-American Sleep & Mattress (for a relatively short time), then became Fatty's Smoke Shop.

2228 - Cash America Pawn is here and has been here since at least 2007. I can't remember what was here before it. The 2226 address doesn't seem to be used, probably absorbed by it or KC Beauty Mart.

2220 - For years, Once Upon a Child was here, but it seems to have moved a least a year ago out to Post Oak Square.

2218 - Play It Again Sports was located right next to OUaC with the same "recycle O" logo, also for years. It closed in the summer of 2012. It is now The Craft & Antique Mall of College Station.

2216 - 9Round was opened after 2012. It appears that the space was used for years as part of Play It Again Sports.

2214 - An Allstate insurance office is here, possibly since moving out from the Sears store a long time ago.

2212 - This was A&M Nails & Spa, then (briefly) RC Salon and has an Aggieland Supplements sign, but the business already seems to have been packed up for Parkway Square. By summer 2020, this became CBD Pros.

2206 - This address (skipping several numbers) is home of Juicy Crawfish restaurant. The space was previously a few clubs including Club Karma and Up Grade. 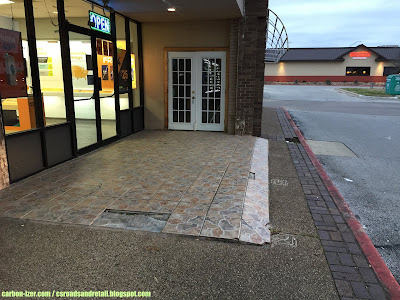 The gutting of Fuddruckers into an outdoor area. Notice the old column scars.

2204 - This is where the shopping center has some "new" features. Boost Mobile is next to a vacant space, which isn't officially numbered. Originally (as far back as I remember) this was Fuddruckers, with the record for it first appearing in 1986. After it moved to the corner of George Bush East and Harvey Road the space more or less remained vacant. There was "Cafe Beignet and Tea House" in 2005-2006 and "Asian Cuisine and Tea House" in 2006-2007 but neither made much of an impact and closed soon after opening. In particular, Asian Cuisine's sign remained for years after "opening" in 2006 and until the signage started falling off. Boost Mobile later came in afterwards.

So what I could figure, Fuddruckers address is listed as 2206 just like everything else was listed originally (Toys Plus, PrioriTEAS).

From what I can tell also, possibly as far back as Cafe Beignet, the interior of the restaurant was cut back (along with the skeletons of the awnings) to make a new courtyard. The end part of the shopping center facing Outback Steakhouse/Target I don't think has EVER been retenanted. 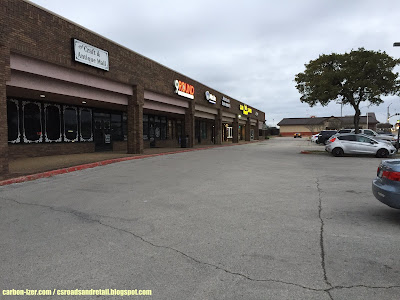 Looking back toward Outback Steakhouse, but we'll save that for another post.

UPDATE 08-03-2021: Some improvements to the Fuddruckers section, additional tags
Posted by Pseudo3D at 5:41 PM 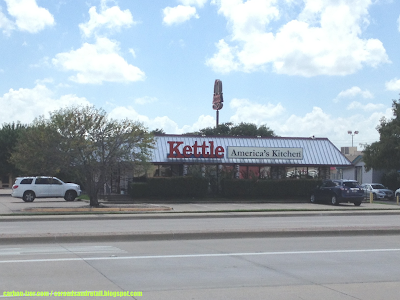 Kettle has since disappeared from the Houston restaurant landscape, but it lives on in College Station. (Photo from August 2016 by author, modified to better show colors)

Over the years, there has been many, many places I've seen that Houston had and College Station-Bryan didn't. If there was any sort of chain in the College Station/Bryan area, then there was one in Houston too. There were exceptions of course, Albertsons had survived nearly a decade after the company pulled out of Houston, and AppleTree did the same. While College Station's Winn-Dixie only lasted sometime around the mid-1990s, Houston didn't even have any Winn-Dixie stores.

This also extends to restaurants. Last year, it was mentioned that Fazoli's no longer has any Houston locations, a result of closings trickling over the last ten years or so. And speaking of ten years, the next stop in the new Texas Avenue is from what I could tell hasn't seen Houston since around 2011, introducing the Kettle, which is the next "stop" on this series. (As this blog is about a decade old, many of the notable places between our last post, O'Reilly Auto Parts, have been covered before, including Exxon, Walmart, Altitude Trampoline Park, BB&T, the former Kmart, Fort Shiloh, and Days Inn).

Kettle #138 at 2502 Texas Avenue South has been around since 1981, built before the Manor House Motor Inn if the dates are right. It's part of a chain that no longer exists...it was once based out of Houston where most of its stores were located and had locations out to Florida.

Today, Kettle can be considered what what fellow blogger Zap Actionsdower considers a "broken chain". I've informed the blog about the Kettle, but he's in a different part of the country to check out the humble Kettle restaurant in College Station. There's another Kettle restaurant in Bryan that's a former Denny's, and there were even more in town, up to five in town, including at the site of Northpoint Crossing. There aren't even five Kettle restaurants in the chain anymore.

It's open 24 hours, despite the fairly quiet part of town where it is located. My guess is that the police station's 24/7 operation also keeps the Kettle in business, too, despite mixed reviews otherwise. (After all, for those working the graveyard shift, where else in the area can you get a decent meal at three in the morning?)

UPDATE 09-15-2021: Kettle is no longer "Always Open" since March 2020 (sad since the last paragraph no longer applies, but do I need to explain why?) and the "Always Open" part of the sign no longer lights up, though they are open until 11pm most days. Someone on Google added an old picture from the early/mid-2000s (not from January 2018) and it shows Kettle as I remember it growing up, with a cook posing inside the "K". A few new tags have been added as well.
UPDATE 01-13-2023: Unfortunately, Kettle never did reopen its 24 hour service (the Bryan one painted over its 24 hour service) and in late 2022 it was announced it would close for good after November 2022. Based on filings, the restaurant will be demolished for College Station's first Salad and Go.
Posted by Pseudo3D at 4:37 PM 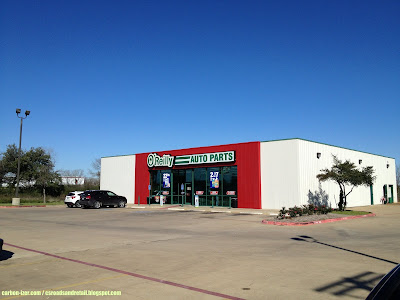 You are now hearing the radio ads for O'Reilly Auto Parts...
Editor's Note: Welcome to 2020! The theme to the next posts I'll be doing on this blog is "Return to Texas Avenue". Here will be additional places missed in the previous posts, with a new index specifically for Texas Avenue coming soon. Additionally, there will be new updates to old posts that will be returned to the index. Stay tuned!

This O'Reilly Auto Parts is at 2831 Texas Avenue South at Morgans Lane, and according to Brazos CAD, built in 2001. The picture above is from me taken in January 2016 (notice there's not any hotels being built behind it), so it's mostly clear blue skies behind it.