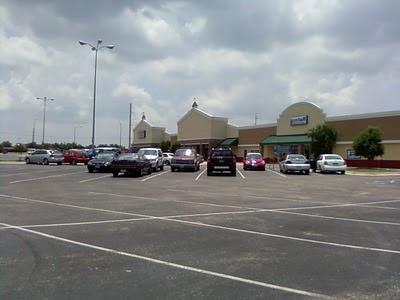 The shopping center at the northwest corner of Harvey Mitchell Parkway and Texas Avenue has a long and storied history. This post originally went up in June 1, 2010 and has been added and edited to over the years and last received a rewrite in 2014 before the current rewrite in 2021.

There's many reasons for the decline and disappearance of Kmart. Under its original form (pre-2002) it was due to poor management and culminations of not investing properly in its store base, preferring store growth over investments in its old stores. Post-2004 was all about draining assets from it along with Sears, but that happened long after Kmart left town (though could be seen with Sears at Post Oak Mall, unfortunately.

Kmart opened at 2700 Texas Avenue South on May 18, 1974, not long after the opening of FM 2818, the "West Loop". Unusually for Texas Avenue, it was not located on the road directly, instead on the frontage roads that curved into FM 2818. When the Kmart opened, it was store #7013, one of their smallest prototypes (without the 9000-series used in rural stores) in the south end of College Station. The store also featured an adjacent grocery store as well. In the early days of Kmart, "Kmart Foods" was a discount-oriented grocery store not technically part of the store (no cross-buying between sections) and operated by a local third party. (Target also did something similar in the 1970s). In the case of this part of Texas, it was Houston-based Lewis & Coker, which opened as its own name rather than Kmart Foods.

The stores did have an interior connection, but not for very long, as the whole Kmart Foods program was already on its way out at the time of the store opening. The Kmart was typical of stores of that era: a white slanted roof and ridged concrete. Lewis & Coker would close this store in the late 1970s with Piggly Wiggly taking over in 1977. The changeover was similar to the gutting of AppleTree years later, quickly go through and change prices in around 48 hours. The store was only about 19,000 square feet (of selling space) and was the only Piggly Wiggly to have a bakery. At some point in the late 1980s, however, Piggly Wiggly closed, and Kmart found a new neighbor across the street that would ultimately contribute to the store's closure (and would do irreparable damage to the chain as a whole), the Wal-Mart at the southwest corner of the intersection, opened in 1988. Rather than remodel, Kmart merely changed their logo in the early 1990s (supposedly they did expand into the Piggly Wiggly space, but I can't confirm that).

In February 1995, facing a (relatively new) Wal-Mart preparing to remodel, a nice new Target up the road (opened 1992), and the closure of Piggly Wiggly (that is, if the "expansion into Piggly Wiggly" didn't actually took place), the Kmart, now badly dated, was shuttered in a round of closings announced in September 1994 (it never even got automatic doors). Target remained popular and the renovated Wal-Mart got a new shade of blue that Wal-Mart loved so much in the 1990s and even had a McDonald's inside, and of course, both still operate today. 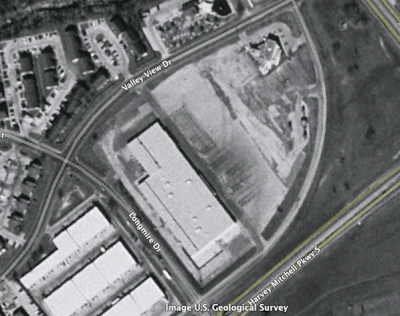 Kmart, shortly after closing. Ferreri's Italian is in the upper right.

With Kmart's vacancy, it left 83,000 square feet open. By the end of the year, however, Tractor Supply Co. moved in the far left part of the store (or the southern part, for those thinking geographically) and remodeled the interior and exterior (the exterior being the metal siding TSC is known for) but only for that part of the store. The TSC took over the garden center part of the store and was rebadged as 2704 Texas Avenue, as most of the former Kmart was still vacant.

In 1996, Big Lots opened in the center of the former store (taking the main facade) and Dollar General (cutting into the ridged '70s concrete Kmart was known for) opened in the remaining space. Big Lots took the 2700 address and I believe Dollar General did too (though I'd have to look at my phone books to confirm that). Dollar General only lasted a few years before giving way to Goodwill (though it ran a store at Longmire and Harvey Mitchell for a few years as well), and around 2001, a discount grocery store concept called "YES!Less" featuring a rather obnoxious-looking anthropomorphic exclamation mark filled in the vacant Kmart Foods/Lewis & Coker/Piggly Wiggly (and ironically, this was operated by Fleming Cos., which was Kmart's main food provider at the time). The former Kmart and its adjoining stores were finally full.

In 2003, YES! Less went out of business (along with the rest of Fleming, really) but quickly reopened under California-based Grocery Outlet (branded as "Grocery Outlet Bargains Only". Save-a-Lot bought Grocery Outlet and reopened it AGAIN if ever so briefly, and I'm sure it was gone by spring 2005. It only lasted a matter of months, and I don't remember it much at all.

Big Lots closed around 2005 (there was a store closure wave), and with the added vacancy of the grocery store space, it once again started to look like it had been a decade prior when Kmart closed.

In 2006, the entire shopping center was given a major exterior facelift (though was never able to get rid of the Kmart concrete ridges), three new tenants were signed on, and it was renamed as "College Station Shopping Plaza". BCS Asian Market (also known as BCS Food Market) came around this time to the old Grocery Outlet (with 2704 Texas Avenue #4 as the address), AutoZone was built in the parking lot next to Taste of China (2706 Texas Avenue), and U-Rent-It (2704 Texas Avenue #5) built on the side of the building and using cinderblocks instead. The parking lot lights are also original. The big change was that the stores were ALL renumbered as 2704 (this probably means Goodwill, now 2704 #3, was changed, since Goodwill opened while Big Lots was still extant).

U-Rent-It closed in 2008, and was eventually replaced (2010) by "The Everything Backyard Store", which renamed to Champion Pools & Patios (same business, though I'm afraid the Facebook proof from that is gone) and relocated out a few years afterwards (by 2012, it looks like) to the College Station Business Center just west of the center until it eventually disappeared. Ultimately, the space at CSSP remained vacant until a 2015 renovation to Impact Church, and became CSL Plasma in 2016 (still open as of December 2018).

Big Lots remained vacant, however. but returned to College Station in 2009 when it occupied an old Goody's further north. In spring 2014, it was finally filled with Vista College (training in things like HVAC, so no Blinn competition here). Vista College also replaced a rusting roadside sign that used to be where the Kmart sign was. 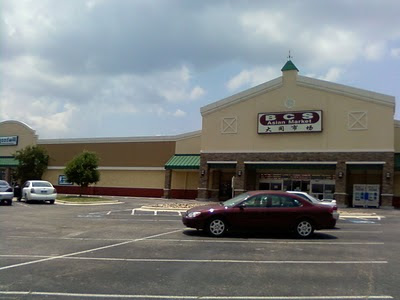 The 2006 redo effectively deleted the 2700 address for years until a new building was built next to AutoZone around late 2017, which was labeled 2700, but as of November 2021 this building remains vacant.

UPDATE 11-09-2021: Another update/rewrite completed. It fixes an error from the 2014 rewrite, gets rid of the "three parts" structure, and updates the dates of when TSC and Big Lots opened.
Posted by Pseudo3D at 8:26 PM